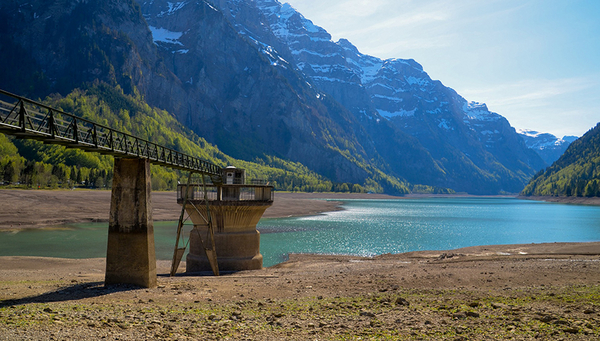 A study by environmental social scientist Mario Angst shows that reports in the media do not always reflect the issues that most concern organisations, public sector agencies, cantons and communities on a day-to-day basis.

Hardly a day went by in the summer of 2018 without a report on the continuing water scarcity at the time in Switzerland. Again and again, newspapers, radio and television were coming up with questions like: “How much water do nature, agriculture and people need?”, “How can we find ways to save water?” and “Which regions have the least water reserves?” On the other hand, Swiss municipal governments, cantons, engineering firms, NGOs and public sector agencies appear to be less concerned with the relationship between water scarcity and water-saving measures. This has been brought to light by a survey conducted by environmental social scientist Mario Angst, in which over 350 representatives from such organisations active in the water sector took part.

Mario Angst, who completed his PhD under Eawag group leader Manuel Fischer, took a look at which water-related topics were reported together in the media. At the same time, he also looked at whether these intersections were reflected in the activities of those working in the Swiss water sector. The research project was funded by the Swiss National Science Foundation.

It is important that the relationships between topics, and not individual topics themselves are investigated. “The greatest social challenges of our time are actually ones in which numerous problems are intertwined, such as climate change or loss of biodiversity”, says Manuel Fischer.

Mario Angst used an archive of articles in the newspaper, Neue Zürcher Zeitung, for his media analysis. The challenge was to filter for articles that were relevant to his research question. “Flooding in countries outside Switzerland, or articles on lakeside hiking were of no interest to me, of course”, he explains. He therefore programmed an algorithm that would sift through over 20,000 newspaper articles and narrow them down to a few hundred. Out of these he then created a network that showed all of the juxtapositions of water-related topics in NZZ articles. He then compared the results with the network that emerged from the responses to the survey of practitioners in the field.

“Some of the discrepancies were astonishing”, says Mario Angst. As mentioned in the example earlier, the connections made by the media between water scarcity and water-saving measures are everywhere. This is not the case in the water sector itself. Strategies and concepts do exist at the highest levels of government, but concrete measures at municipal or cantonal level for saving water in times of water scarcity have not (as yet) been put in place, with very few exceptions. Parallels are often drawn in the media between fracking and water pollution, while this is not the case in practice.

Conversely, the media are rarely interested in certain crossover points that have relevance to practitioners, such as invasive species that must be taken into consideration when regenerating rivers, for example. Or the link between agricultural inputs into the environment and pollution of groundwater.

“The discrepancies are quite natural” says Manuel Fischer, a political scientist based at Eawag. The media are often one step ahead, and they pick up on public fears a lot more quickly, he explains. A typical example of this is the debate around fracking: The topic has appeared in the media time and time again in connection with the pollution of drinking water. In practice, however, the parallel is rarely talked about, simply because there have been no fracking projects in Switzerland in recent years. “Perhaps also because it became very clear to the policy makers and industry that the population was so antagonistic towards fracking”, says Fischer.

The media are therefore very important when it comes to agenda setting. “If controversies and hot topics are dealt with in the media over and over – such as regional water shortages – the policy makers and practitioners are more likely to take steps to address them”, says Fischer. On the other hand, it is also completely understandable that the media rarely go for uncontroversial or abstract topics.

Manuel Fischer stresses that the study did not look at whether practitioners or the media are concerning themselves with irrelevant topics. Rather, the results of the study are important for future research projects. “In order to feel the pulse of Switzerland, it makes sense to conduct surveys in the field, as well as to undertake media analyses.”

The lines represent the linkages between different water-related topics in the media (left) and in the Swiss water sector. The different colours indicate various topic categories.
(Source: Mario Angst, 2019)

This study analyzes Swiss water governance as a network of interrelated issues. It compares how organizations reflect relations between governance issues in their activity with the way issue relations are depicted by the media (issue attention-activity fit). To do so, a media data analysis, supported by machine learning, is combined with a nation-wide survey. Prominent areas of misfit relate to the coordination between water saving measures and drought risks; the exploitation of subterranean resources and drinking water protection; and issues of micropollutants. The study demonstrates that comparing organizational activity with media attention is particularly well suited to recognize newly emerging, currently neglected areas of governance.
See DOI
See Institutional Repository
Angst, M. (2019) Networks of Swiss water governance issues. Studying fit between media attention and organizational activity, Society and Natural Resources, 32(12), 1416-1432, doi:10.1080/08941920.2018.1535102, Institutional Repository
Created by Stephanie Schnydrig
Share with others: