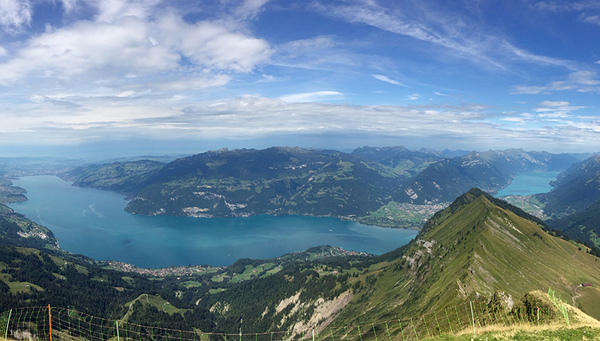 In Lakes Thun and Brienz, evolutionary biologists from Eawag and Bern University have discovered a new whitefish species. The species, provisionally named “Balchen2”, is clearly differentiated – morphologically, ecologically and genetically – from the five Lake Thun whitefish species previously described. The only lake known to harbour a higher number of whitefish species is the 200 times larger Russian Lake Onega.

Whitefish are important both ecologically and commercially for the prealpine lakes – and are thus also of interest to researchers. Whitefish diversity in Switzerland and neighbouring regions is therefore being investigated as part of a long-term project conducted by a group of evolutionary and fish biologists led by Ole Seehausen at Eawag and Bern University.

In “Projet Lac” – a systematic inventory of fish populations covering 32 prealpine lakes from 2010 to 2017 – researchers were intrigued by the diversity of whitefish found in the lakes of the Bernese Oberland. Doctoral student Carmela Dönz subsequently studied genetic data from over 2000 captured whitefish, together with historical records and information from commercial fishermen; also taken into account were genetic studies carried out by David Bittner using specimens from earlier cantonal monitoring programmes (1950–1975).

This research revealed the existence of another whitefish species in Lakes Thun and Brienz, which, while showing certain similarities (genetically, morphologically and in spawning behaviour) to the previously described “Balchen” and “Felchen”, is clearly distinct from both of these species. Provisionally designated as “Balchen2”, the new species is now being scientifically described – and the taxonomy of Bernese Oberland whitefish is being reviewed – as part of an ongoing whitefish speciation project at Eawag and Bern University.
With its new total of six species, the whitefish species richness of Lake Thun is among the highest worldwide: only in Lake Onega (in northwestern Russia) has a larger number of whitefish species (nine) been documented, although here it is not clear whether they all actually occur together or are distributed across various geographical areas of the huge lake. Six whitefish species have also been identified in Lake Lucerne; however, the “Alpnacherfelchen” is essentially confined to the southern arm of the lake (Alpnachersee).

But how did such a wide variety of whitefish species develop in the prealpine lakes?

At the end of the last ice age (about 15,000 years ago), the ancestors of today’s whitefish colonized the prealpine lakes that emerged as the glaciers retreated. They occupied all the available niches – some spawning in deeper waters, others near the surface, others again at intermediate depths.

Dönz explains: “By becoming specialized to different habitats, the fish were able to exploit the lakes’ resources more efficiently. That applies not just to water depth but also to other environmental conditions.”

Differences in morphological features thus arose – for example, in the gill rakers (bony structures projecting from the gill arch): open-water (pelagic) specialists developed large numbers of gill rakers, enabling them to filter zooplankton from the water; in contrast, deep-water whitefish, feeding on benthic invertebrates (larvae and snails), developed a low number of robust gill rakers and a different mouth shape.

As the best adapted individuals in each ecological niche reproduced most successfully, the differences were also reflected at the genetic level. And as the various groups spawned at different depths, thus promoting genetic differentiation, new species evolved over time. Conditions for speciation were particularly favourable in the deep prealpine lakes.

Three of the whitefish species which evolved in this way in the large lakes of the Bernese Oberland were already familiar: the small “autumn brienzlig”, which feeds on zooplankton in open water and generally spawns in deeper waters; the large, benthic-feeding “Balchen”, which spawns in shallow littoral waters; and the “Felchen”, which is similar to the “brienzlig” in many respects but is larger and normally spawns later in the year. In Lake Thun, these species are joined by the “kropfer”, which is a benthic feeder like the “Balchen”, but lives in deep waters, and the surface-dwelling “Albock”, whose origins are, however, quite different.

The new study confirmed previous indications that the Lake Thun whitefish now known as “Albock” is a different species from the historical “Albock” described as the most important Lake Thun whitefish species in written sources from the 15th to the early 20th century. Today’s “Albock” derives from whitefish introduced from Lake Constance in the 1930s, as is confirmed by genetic evidence and historical sources. This species only became commercially important after a period of anthropogenic eutrophication – which was relatively mild in the Bernese Oberland lakes.

According to Carmela Dönz, “It’s possible that this new species benefited from ecological changes occurring in recent decades.” From a biological perspective, it is interesting that the “new Albock” has managed to survive as a separate species in the presence of native whitefish species, since its spawning time and depth overlap with those of the “Balchen”. Such overlaps do not occur among the species which evolved in the same lake. Thus, the theory that species which arose in geographically separate areas (in this case, Lake Constance and the postglacial Lake Wendel, comprising Lakes Thun and Brienz) can often coexist, even with overlapping ecological niches, has now been confirmed for the first time in whitefish. In contrast, for species which arose in the same lake, distinct ecological niches are often essential isolation factors – in their absence, hybridization will occur. For example, during the eutrophication period, whitefish species were lost in most large Swiss lakes – particularly in deeper waters, where oxygen levels were inadequate.

Adaptive radiations in postglacial fish offer excellent settings to study the evolutionary mechanisms involved in the rapid buildup of sympatric species diversity from a single lineage. Here, we address this by exploring the genetic and ecological structure of the largest Alpine whitefish radiation known, that of Lakes Brienz and Thun, using microsatellite data of more than 2000 whitefish caught during extensive species-targeted and habitat-randomized fishing campaigns. We find six strongly genetically and ecologically differentiated species, four of which occur in both lakes, and one of which was previously unknown. These four exhibit clines of genetic differentiation that are paralleled in clines of eco-morphological and reproductive niche differentiation, consistent with models of sympatric ecological speciation along environmental gradients. In Lake Thun, we find two additional species, a profundal specialist and a species introduced in the 1930s from another Alpine whitefish radiation. Strong genetic differentiation between this introduced species and all native species of Lake Thun suggests that reproductive isolation can evolve among allopatric whitefish species within 15,000 years and persist in secondary sympatry. Consistent with speciation theory, we find stronger correlations between genetic and ecological differentiation for sympatrically than for allopatrically evolved species.
See DOI
See Institutional Repository
Doenz, C. J.; Bittner, D.; Vonlanthen, P.; Wagner, C. E.; Seehausen, O. (2018) Rapid buildup of sympatric species diversity in Alpine whitefish, Ecology and Evolution, 8(18), 9398-9412, doi:10.1002/ece3.4375, Institutional Repository

Whitefish systematically captured in the course of “Projet Lac”

Specimens are measured, weighed, photographed and described as part of “Projet Lac” – the first systematic inventory of fish populations in Swiss lakes.

A large shoal of whitefish seen at a depth of around 30 metres.