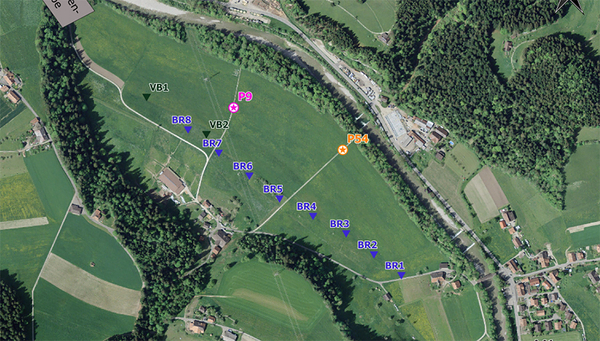 It is easy to see why the topic of groundwater formation is such an important one for researchers. “If we want to secure a reliable water supply, we need to understand how surface water and groundwater mix in vulnerable aquifers and how quickly the water moves there,” says hydrologist Andrea Popp, who recently completed her thesis at Eawag and ETH Zurich and is developing a new methodological approach in order to gain a better understanding of groundwater. The method was recently presented in the journal Water Resources Research.

Help from a portable mass spectrometer

The key innovation here is that the new method untangles fractions of recently infiltrated river water and regional groundwater within the aquifer and determine the flow times of infiltrated river water within this groundwater-bearing layer. Until now, these times were determined based on non-specific groundwater samples with the help of dating techniques. The team led by Andrea Popp took in-situ measurements of noble gases dissolved in the water, which can be “sniffed out”, so to speak, using a portable mass spectrometer (video) developed at Eawag. The results are then combined using model calculations.

Field work at the measurement hut in Aeschau in January 2019.
(Image: Andrea Popp)

70 percent of the groundwater comes from the river Emme

The method was first used as part of a case study within the Emmental (the valley of the river Emme). Samples were taken from the groundwater wellfield in Aeschau, where water is pumped into a number of well chambers aligned in parallel to the river. This drinking water is used to supply a large part of the city of Bern, among others. The key findings of the pumping tests carried out in early 2019 are as follows: around 70 per cent of the groundwater comes from the river Emme, and the river water moves through the aquifer relatively quickly, with a flow time of between 7 and 14 days. “We can think of the Emmental as a bathtub filled mainly with sandy gravel and crushed stones,” explains Andrea Popp. “This explains the rapid flow times.”

Field work in the streambed of the Emme at Aeschau.
(Image: Andrea Popp)

These are important findings, not least when it comes to the impact of climate change. A previous study found that the annual discharge of the river Emme is decreasing. Between 1999 and 2018, it fell by over 10 per cent per decade, and projections for the years 2070–2099 indicate that the discharge in summer will decrease by between 25 and 45 per cent due to rising air temperatures.

This matches estimates from the report entitled “Effects of climate change on Swiss water bodies”, which was recently published by the Swiss Federal Office for the Environment (FOEN) in relation to the Hydro-CH2018 project. The report states that: “In general, the hydrological scenarios show that there will be a significant reduction in water levels in summer and autumn. This applies both to surface waters and to groundwater.” At the same time, the report states, summer dry periods and heat waves will be more frequent and last longer in the future. “Without climate change mitigation, the low summer flows into areas at altitudes of less than 1,500 metres will fall by 30 per cent during dry periods.”

A framework for untangling transient groundwater mixing and travel times

Understanding the mixing between surface water and groundwater as well as groundwater travel times in vulnerable aquifers is crucial to sustaining a safe water supply. Age dating tracers used to infer apparent travel times typically refer to the entire groundwater sample. A groundwater sample, however, consists of a mixture of waters with a distribution of travel times. Age dating tracers only reflect the proportion of the water that is under the dating range of the used tracer, thus their interpretation is typically biased. Additionally, end-member mixing models are subject to various sources of uncertainties, which are typically neglected. In this study, we introduce a new framework that untangles groundwater mixing ratios and travel times using a novel combination of in-situ noble gas analyses. We applied this approach during a groundwater pumping test carried out in a pre-alpine Swiss valley. First, we calculated transient mixing ratios between recently infiltrated river water and regional groundwater present in a wellfield, using helium-4 concentrations combined with a Bayesian end-member mixing model. Having identified the groundwater fraction of recently infiltrated river water (Frw) consequently allowed us to infer the travel times from the river to the wellfield, estimated based on radon-222 activities of Frw. Furthermore, we compared tracer-based estimates of Frw with results from a calibrated numerical model. We demonstrate (i) that partitioning of major water sources enables a meaningful interpretation of an age dating tracer of the water fraction of interest and (ii) that the streambed has a major control on the estimated travel times.
See DOI
See Institutional Repository
Popp, A. L.; Pardo-Álvarez, Á.; Schilling, O. S.; Scheidegger, A.; Musy, S.; Peel, M.; Brunner, P.; Purtschert, R.; Hunkeler, D.; Kipfer, R. (2021) A framework for untangling transient groundwater mixing and travel times, Water Resources Research, 57(4), e2020WR028362 (16 pp.), doi:10.1029/2020WR028362, Institutional Repository