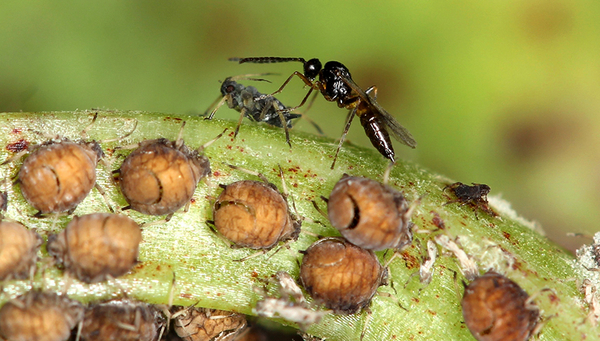 Host and parasites are often engaged in an evolutionary arms race. Researchers at Eawag have intervened in this warring relationship and demonstrated how it can be used to improve biological pest control.

Biological alternatives to pest control are needed to deal with the residue of pesticides in the environment. Tiny wasps that protect crops from aphids with voraciously destructive appetites are just one way of achieving this. The female wasps lay their eggs in the aphids. The larvae that then grow inside devour the aphid from the inside out. That is why these organisms have been specifically identified as a way forward in biological pest control and released into greenhouses.

But: Some aphids are able to circumvent these attacks through a symbiosis with bacteria, which renders them impervious to the parasitic wasps. The mother aphids even pass these bacteria onto their offspring meaning they will be naturally present in the next generation. Aphid populations can become so resistant to the parasites that they cannot be attacked at all.

But the wasps can regroup for a counterattack, too. “This is a real evolutionary arms race between the host and the parasite,” says Christoph Vorburger, Head of the Aquatic Ecology Department. To give the “little helpers” an advantage, he selectively breeds the wasps to help them adapt. This has already been demonstrated in various laboratory experiments.

But can this actually improve biological pest control? “Yes,” says Vorburger, “at least in the laboratory trials.” In their study, which will shortly be published in the trade journal “Evolutionary Applications”, Vorburger and his team demonstrate how: In contrast to wasps that have not been adapted, wasps that have evolved on an experimental basis are able to significantly reduce the population density of resistant pests. Experimental evolution means letting natural selection run its course in the lab through numerous generations. “This kind of pre-adaptation in the lab could also be useful for beneficial insects bred at a commercial level,” says Vorburger.