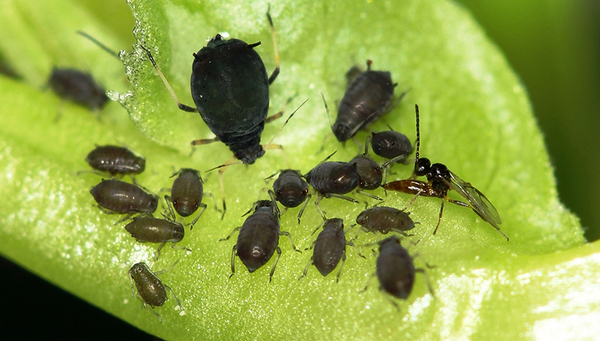 If one observes the competition between parasites and symbionts, much can be learned about the theory of evolution. Two Eawag researchers have thus shown in a new study that high parasite diversity promotes symbiont diversity.

Parasitic wasps act as biological weapons against aphids in pest control. With the help of symbionts, however, some aphids try to defend themselves against the attacks. The struggle between these insects is one of the specialities of Christoph Vorburger, head of the "Aquatic Ecology" department and evolutionary ecologist Nina Hafer-Hahmann, postdoc in the same department. For instance, Vorburger's team has already shown in earlier experiments that wasps develop new genetic patterns to fight their enemy despite symbionts.

In a new study, Hafer-Hahmann and Vorburger have now uncovered another astonishing dynamic by means of selective breeding (called "experimental evolution" in technical circles). "If the wasps have high genetic diversity, this also promotes the genetic diversity of the symbiotic bacteria in aphids," says Nina Hafer-Hahmann, lead author of the study, which has been published in the journal "Ecology Letters".

On the trail of a mystery of evolution

With this knowledge, one mystery can be explained at least in part. In the wild, it is often observed that different organisms in the same habitat have different symbionts. Take aphids for example: individual aphids carry different symbionts than their fellow species. "From the perspective of the theory of evolution, it doesn't really make sense," says Nina Hafer-Hahmann. All aphids ought to have the same symbiont – namely one that protects best against voracious wasps. But this is only true if all wasps are the same. If there are genetically different wasps, aphids can gamble on carrying the right symbiont. Therefore, a variety of symbionts is maintained in a population so that it can protect itself against a wide variety of parasites.

The study by the research duo reveals interesting parallels with the human immune system. Because here too: the diversity of our immune system, i.e. the variety of antibodies, depends on how many pathogens it has to defend itself against.

Parasitoids as drivers of symbiont diversity in an insect host

Immune systems have repeatedly diversified in response to parasite diversity. Many animals have outsourced part of their immune defence to defensive symbionts, which should be affected by similar evolutionary pressures as the host's own immune system. Protective symbionts provide efficient and specific protection and respond to changing selection pressure by parasites. Here we use the aphid Aphis fabae, its protective symbiont Hamiltonella defensa, and its parasitoid Lysiphlebus fabarum to test whether parasite diversity can maintain diversity in protective symbionts. We exposed aphid populations with the same initial symbiont composition to parasitoid populations that differed in their diversity. As expected, single parasitoid genotypes mostly favoured a single symbiont that was most protective against that particular parasitoid, while multiple symbionts persisted in aphids exposed to more diverse parasitoid populations, which in turn affected aphid population density and rates of parasitism. Parasite diversity may be crucial to maintaining symbiont diversity in nature.
See DOI
See Institutional Repository
Hafer-Hahmann, N.; Vorburger, C. (2020) Parasitoids as drivers of symbiont diversity in an insect host, Ecology Letters, 23(8), 1232-1241, doi:10.1111/ele.13526, Institutional Repository
Created by Stephanie Schnydrig
Share with others: