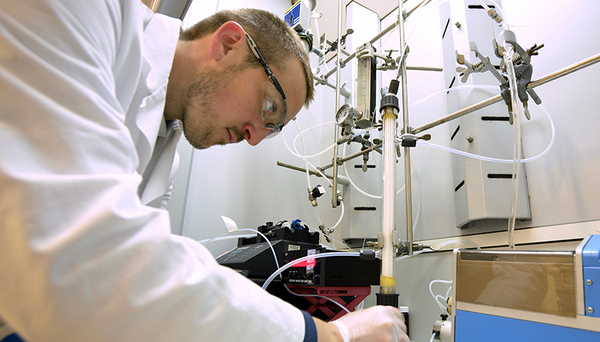 If drinking water or wastewater containing bromide is treated with ozone to remove micropollutants, bromate – a potentially carcinogenic substance – is formed. Eawag scientists have developed a new process which makes it possible to minimize bromate formation during ozonation. This is achieved by transferring ozone to the water in small doses through the pores of PTFE membranes. By Andres Jordi

Because a wide range of micropollutants are broken down by ozonation, this is often the method of choice for the treatment of drinking water or wastewater (see Box). Over the next 25 years, around a hundred wastewater treatment plants (WWTPs) across Switzerland are to be upgraded with an additional treatment step for micropollutant removal. Here, ozone is a suitable option, and an ozonation system can generally be integrated into existing treatment operations.

However, if water is contaminated with bromide, ozonation leads to the formation of (potentially carcinogenic) bromate, which then enters drinking water or is released into rivers and lakes with the treated wastewater. The tolerance value specified for bromate in drinking water in Switzerland is 10 micrograms per litre. While levels of bromide in drinking water are usually low, significant bromide concentrations may occur in wastewater if chemical plants or waste incinerators are present in the WWTP catchment area.

On the basis of the so-called peroxone (ozone/hydrogen peroxide) process, scientists at Eawag have now developed an ozonation method which allows bromate formation to be minimized. “Bromate formation can be reduced by keeping ozone concentrations in the water at a low level,” says project leader Urs von Gunten of the Water Resources & Drinking Water department. This can be achieved, he explains, by dosing ozone in very small portions, so that it is rapidly transformed into hydroxyl radicals. The addition of hydrogen peroxide accelerates this transformation process and suppresses the formation of bromate precursors (Fig. 2).

Fig. 2: The problematic compound bromate is formed as a result of a chemical reaction between bromide and ozone, involving various intermediate stages (highly simplified diagram). Low concentrations of ozone (O3) inhibit the formation of bromate precursor 1; hydrogen peroxide (H2O2) ensures that ozone is rapidly transformed into hydroxyl radicals (˙OH) and bromide is formed once again from precursor 2. Thus, only small quantities of precursors arise which can further react to form bromate.

Initial efforts to reduce bromate formation in practice involved the use of injection valves to improve ozone dosing. According to von Gunten, “This enabled bromate formation to be further reduced compared to the conventional peroxone process, but the effect is limited because the number of valves that can be used is relatively small.” The researchers then hit upon the idea of using polytetrafluoroethylene (PTFE) membranes to transfer ozone: “Ozone can be added in very small doses through the membrane pores, and the number of dosing points available is virtually unlimited.”

The new method was tested in the laboratory with a prototype consisting of PTFE hollow-fibre membranes in a glass reactor flushed with ozone gas. The ozone diffuses through the membrane pores into the water flowing inside, which cannot permeate the hydrophobic PTFE surface (Fig. 1). For the experiments, the scientists used ground, river and lake waters with similar pH values but differing dissolved organic carbon concentrations. The water samples were spiked with bromide (100 micrograms per litre). As an ozone-resistant target compound, p-chlorobenzoic acid (pCBA) was also added (approx. 80 micrograms per litre). The samples were then treated with various ozone doses.

Von Gunten says: “Compared to the conventional peroxone process, our process shows better performance in terms of both bromate minimization and micropollutant abatement.” In the groundwater experiments, for example, bromate concentrations remained below the limit of quantification even with a pCBA abatement level of 95 per cent. The performance of the membrane-based process was also superior with river and lake water (Fig. 3). As von Gunten emphasizes, “To ensure low levels of bromate, it’s important that the concentration of ozone gas in the glass reactor is kept below one gram per cubic metre.” If ozone gas concentrations exceed ten grams per cubic metre, better results are obtained with the conventional peroxone process.

Following the successful laboratory experiments, the scientists now intend to test and further optimize the membrane-based process in the settings where it should ultimately be used – drinking water and wastewater treatment. Von Gunten comments: “We need to further improve, for example, the efficiency of ozone transfer so that the membrane area required under real-life conditions is not too large.” An application to patent the new process – known as MEMBRO3X – has already been submitted.

How does ozonation work?
Ozone, which consists of three oxygen atoms, is a reactive gas. It is a powerful oxidizing agent and forms hydroxyl radicals in contact with water. While ozone itself only oxidizes certain micropollutants, the hydroxyl radicals attack a wide range of substances. Ozonation leads to the breakdown of various complex compounds, thus making them more susceptible to biological degradation. Because ozonation also inactivates bacteria, ozone is frequently used as a disinfectant, e.g. in the treatment of drinking water.