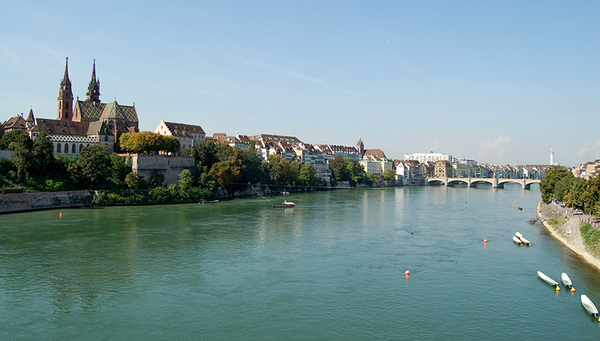 Using a simple but ingenious strategy, a research team has successfully demonstrated how water quality downstream of wastewater treatment plants is influenced by a single pharmaceutical manufacturing site: as variations in the concentrations of compounds over time are dependent on production cycles, it is possible to distinguish between industrial and household emissions – even a long way downstream.

When pharmaceutical active substances and metabolites are excreted, they make their way to wastewater treatment plants. As these compounds are not completely eliminated by treatment processes, some residues end up in streams and rivers. The same applies to wastewater discharged by pharmaceutical companies. Researchers from Eawag, ETH Zurich and a spin-off have now shown that a single pharmaceutical production site can influence the water quality of an entire river system.

Little is known about the extent of water contamination attributable to the pharmaceutical industry – partly because companies do not disclose details of their manufacturing activities. In the study, the research team led by environmental chemist Heinz Singer and doctoral student Sabine Anliker investigated effluents from two treatment plants in the Rhine catchment, one of which only receives domestic and commercial wastewater, while the other also receives wastewater discharged by a pharmaceutical company.

…detected thanks to typical patterns

Effluent samples collected daily over a three-month period were analysed using high-resolution mass spectrometry. As pharmaceuticals are generally produced batchwise, the researchers looked for compounds whose concentrations fluctuated widely over time. They identified 25 compounds with typical (recurring) concentration patterns, including antidepressants and opiates. The peak levels of these substances were much higher than those found in household wastewater.

Whether the effluents deriving from pharmaceutical production have adverse effects on the downstream river ecosystem could not be investigated in this study. However, according to Heinz Singer, the concentrations measured are such that “For the manufacturer, it could make sense considering improvements to on-site wastewater pretreatment”. Particularly striking, for Singer, was the fact that the concentration patterns observed could still be clearly detected at the Rhine monitoring station near Basel, 100 kilometres downstream. In the article just published online in Environmental Science & Technology, the authors therefore conclude that “Small wastewater volumes from a single industry not only left a clear signature in the effluents of the respective WWTP, but also influenced the water quality of one of Europe’s most important river systems.”

(Text based on a press release of the American Chemical Society)

This study was co-funded by the Swiss Federal Office for the Environment (FOEN).