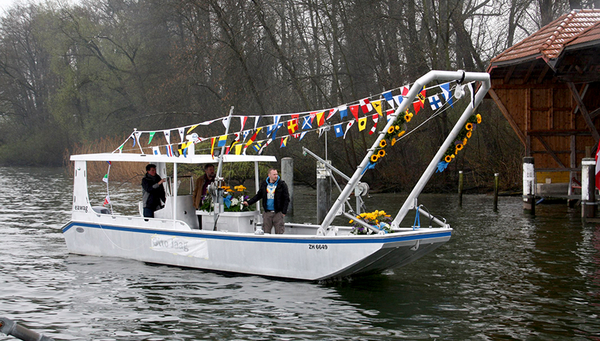 The Verband zum Schutz des Greifensees (VGS) (Association for the Preservation of Lake Greifensee) elected its new Council of Delegates on 25 June 2020. In addition to representatives of all municipalities surrounding the lake, the committee also includes cantonal agencies, farmers, fishermen, sailors and – for the first time – a research representative, with the election of Eawag’s Piet Spaak as an aquatic ecologist.

The expert on zooplankton in the lake emphasises that he has been elected ‘ad personam’ and is not serving on behalf of Eawag. This does not, of course, prevent him from representing Eawag’s interests in the Greifensee, and Eawag will also benefit from an even stronger network of stakeholders associated with the lake.

On the other hand, the association will benefit from Eawag’s knowledge of the lake. There are already plans to include one or two articles on Eawag’s research into the lake in a publication by the ‘Naturforschende Gesellschaft Greifensee’ an association that focuses on nature research in respect of the lake. ‘We know a great deal about the lake, such as the algae and their dynamics, changes caused by climate change, and the presence of fertilisers and pesticides,’ says Spaak. He believes that this knowledge should be shared on an ongoing basis within the association in an easily accessible manner.

Lake Greifensee has always featured prominently in both research and teaching at Eawag. The lake is located close to Eawag’s Dübendorf site, and the Institute owns one of the few motorboats – the Otto Jaag – that is officially permitted to use this body of water, which has enjoyed cantonal protection since 1941. Spaak therefore hopes that his seat on the Council of Delegates will also bring benefits to Eawag in that it should win the Institute a greater level of understanding and leeway when it comes to certain practicalities involved in Eawag projects, such as a raft needing to be anchored or buoys needing to be moored.