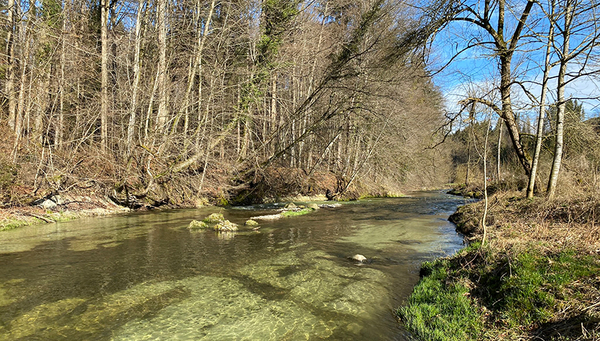 Together with the Canton of St. Gallen, Eawag has been investigating the impact of the expansion of the wastewater treatment plant at Flawil to include a stage for the removal of micropollutants on water quality in the River Glatt. Initial results now show a very positive picture.

The expansion of the Oberglatt WWTP in Flawil with an additional treatment stage to remove micropollutants is having an effect. This is shown by initial results recently presented as part of the Eawag Peak course "Biological effects of trace substances downstream of wastewater treatment plants". The data were collected in joint studies by the Canton of St. Gallen, the Eawag Water Research Institute and the former Eawag Spin-off Aquatox-Solutions. According to Christian Stamm, deputy head of Eawag's Environmental Chemistry Department, it is particularly noteworthy that no difference can be detected between hormone-active effects of substances above and below the return of treated wastewater in the Glatt.

Cellular responses in fish before (left 2020) and after (right 2022) the upgrade of the Oberglatt WWTP. While in 2020 there was still a clear difference between the samples above and below the return of treated wastewater, this is no longer present in 2022 after the upgrade. (Graphic: Eawag)

The expectations for the technological upgrade of the WWTP were high. The expansion cost around 20 million Swiss francs, and the construction work took over two years. The expansion included, on the one hand, the extension of the biological treatment stage (biofiltration) and, on the other, the construction of a new stage for the removal of micropollutants. Now the study shows that the effort was worth it. "The results make us very optimistic," Reto Gnägi, Managing Director of the Flawil-Degersheim Gossau Wastewater Association, is quoted as saying in the media release sent out today by the intercantonal Glatt Commission, "it is becoming apparent that the new stage will write another chapter in the success story of water protection on the Glatt."

The Oberglatt WWTP, which is operated jointly by the municipalities of Flawil, Gossau and Degersheim, was last expanded between 1999 and 2003. Now a new expansion was necessary. The biological treatment stage had to be expanded because it had reached its capacity limit. Due to the high proportion of treated wastewater in the water body and the associated high pollution of the Glatt, an EMC stage also had to be constructed. This has also been required by federal water protection legislation since 2016. The legally prescribed target is the reduction of 80 per cent of all micropollutants.

Activated carbon in Herisau and now in Flawil

The term micropollutants or trace substances covers a wide range of substances, for example medicines, pesticides, food additives, ingredients of cosmetics or cleaning agents. Many of these substances enter the WWTPs via domestic and industrial wastewater and are discharged into rivers and streams if they are not treated with an EMC stage. There they influence the aquatic ecology and can endanger aquatic organisms. Micropollutants not only have a negative impact on water quality, they are also found in groundwater, which is the most important drinking water resource in Switzerland.

The new stage, which went into operation at the Oberglatt WWTP in autumn 2021, uses powdered activated carbon. In this process, micropollutants bind to carbon particles, which are then separated from the wastewater. The Herisau WWTP had already chosen this process for its additional stage, which has been in successful operation since June 2015. Shortly after commissioning, thanks to this improvement, significantly fewer micropollutants entered the Glatt with the treated wastewater - and as environmental monitoring showed, this also reduced stress factors for fish, among other things. However, the improvement achieved in the upper reaches of the Glatt was practically cancelled out by the wastewater from the Oberglatt WWTP, which had not yet been built at the time.

Risk from drug residues has decreased

This is no longer the case today. Various studies conducted before and after the commissioning of the stage against micropollutants in Flawil by the Office for Water and Energy (AWE) of the Canton of St. Gallen and by Eawag, the water research institute of the ETH Domain, show a positive development in the quality of the water that is discharged into the Glatt after purification, both in terms of chemical and biological effects. The risk to aquatic organisms from the active ingredient diclofenac, which is contained in the painkiller Voltaren, for example, has halved compared to 2020. Overall brown trout showed a reduction in stress factors after the additional stage was put into operation.

"It is still too early to know the positive consequences of the new purification stage in detail," says Vera Leib, head of the Water Quality Department of the St.Gallen Office for Water and Energy, "but already one year after commissioning it can be said that the stage has led to a considerable reduction in the load of micropollutants now downstream of the Oberglatt WWTP."

This text is based on the media information of 24.11.2022 of the Glatt Commission (as an association of the water protection agencies of the cantons SG and AR, Glatt municipalities, representatives of industry, agriculture, FOEN and other experts).

Cover picture: For a long time the idyll on the Glatt was invisibly clouded by pollutants - now the situation has measurably improved. (Photo: Office for Water and Energy, Canton St. Gallen)