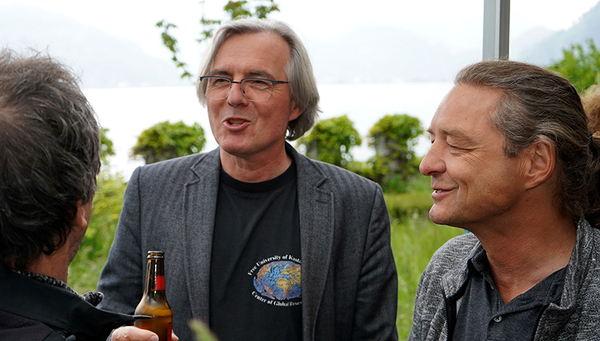 In the 45 years since he began studying Chemistry at ETH Zurich, Bernhard Wehrli has been a research scientist, Head of Department and member of the Directorate at Eawag and Professor at ETH Zurich, as well as holding various other positions. Though he has now retired, he remains committed to freshwater science and sustainability.

In his entertaining Farewell Lecture, Bernhard Wehrli looks back over his academic career.

“I suppose I was always too curious about too many things,” says Professor Bernhard Wehrli, commenting on the fact that the ETH Board marked his departure by emphasising his achievements as “someone who builds bridges”, rather than as a respected scientist. But it was precisely this curiosity and capacity for empathy – evidenced by his boundless energy and mischievously twinkling eyes – that made so much possible and helped so many people in the course of Wehrli’s successful career. Although he officially retired on 1 August 2022, he still has plenty of plans for the future: “Yes, I would still like to save the world,” he admits with a smile.

So, for Wehrli, what does “saving the world” now involve? He is continuing his research on sustainability, he says, exploring how the challenges in this area can best be tackled by society. His commitment to sustainability is shared by his wife, Professor Christine Bratrich, who also conducts interdisciplinary and applied research projects in this area – since 2021, as Vice Dean at the Lucerne School of Engineering and Architecture. Wehrli has, however, vacated his offices at ETH Zurich and at Eawag’s Kastanienbaum site – “You have to be able to let go!” – merely retaining academic guest status; reviewing can also be done at home. Sustainability remains an essential part of his own life, and he has already taken advantage of his new freedom to undertake a cycling trip to the North Cape with his wife.

Building bridges – and speaking out

There is no doubt that Bernhard Wehrli sought to build bridges – between students and lecturers, between disciplines, within the ETH Domain, at Eawag, and also with practice and policymaking – but these efforts were not always universally welcomed: on matters of policy, he was not afraid to articulate well-founded positions with the necessary tenacity. At the end of 2019, for example, in the context of two popular initiatives, he drew high-level criticism for publicly arguing that action was required on the issue of pesticides in water. He also sometimes disagreed with the ETH Executive Board (closure of the Institute of Science, Technology and Policy) or with Eawag management (reorganisation) and did not hesitate to state his case.

Dedication to interdisciplinary teaching and research

While certain disagreements may have been stressful, there was no shortage of successes in Wehrli’s career as a scientist and water protection expert. One example is the interdisciplinary “Green Power” project (1997–2000), in which Eawag developed principles for the certification of sustainable hydropower production which are still applicable today. Parts of the project, such as the investigation of hydropeaking downstream of hydropower plants, subsequently also influenced Swiss legislation. This was particularly gratifying for Wehrli – as was the gratitude expressed by environmental systems science students or the successful development of interdisciplinary activities at ETH Zurich, such as system practical courses or ETH Week.

Wehrli is aware that success in research is relative: “Anyone who sticks their neck out too far is brought back into line by reviewers – really new ideas are rare.” Often, he says, the same questions are merely investigated in more detail with new methods and new technologies, which is not wrong, but ultimately uninteresting. This is partly due to the fact that – in the imaginative chemist’s eyes –research is highly ritualised, “almost like the church”.

You can only be really satisfied when your own research findings make it essential to rewrite the textbooks. As an example, Wehrli mentions the discovery that the release of dissolved phosphorus from lake sediments cannot be prevented by artificial ventilation – “It took us years to gain a better understanding of this process.” Or again, the surprising finding that large amounts of methane rise to the surface of reservoirs via gas bubbles and are thus emitted to the atmosphere.

Bernhard Wehrli wishes Eawag all the best: he hopes that the institute can continue to promote the health of freshwater systems, for example by further strengthening its network of alumni, which includes employees of numerous federal and cantonal agencies. He calls this vision “PEAK 2.0” – a renewal of the practice-oriented Eawag courses. We also wish him all the best.

Professor Bernhard Wehrli (*1957) served as full professor of Aquatic Chemistry at the Department of Environmental Systems Science (D-USYS) at ETH Zurich from 2001 until his retirement on 1 August 2022. He joined ETH Zurich as an assistant professor in 1991, while also working at Eawag. His research focused on the biogeochemistry of inland waters, nutrient and carbon cycles, redox processes and greenhouse gas emissions. At Eawag, Wehrli held various positions including Head of Department (1996–2005) and member of the Directorate (2005–2015). He was also a member of the National Research Council of the Swiss National Science Foundation (2005–2011). At ETH Zurich, he was Head of the Institute of Biogeochemistry and Pollutant Dynamics (2016–2018) and Director of Studies at D-USYS (2018–2021).