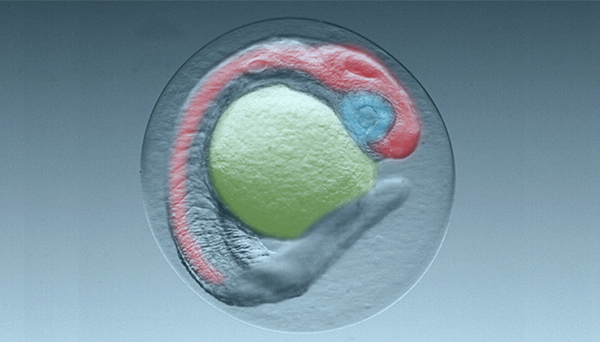 Toxic substances in the environment can harm the nervous system of fish embryos. Now, researchers at Eawag have developed a computer model that helps to better understand how the damage occurs.

Every day, a large number of synthetic chemicals enter streams, lakes and sometimes even drinking water via various pathways. The Eawag Water Research Institute wants to find out what the long-term consequences of this are for the aquatic environment and human health. "In this context, one of the most challenging areas of research is neurotoxicity, i.e. the impact of these substances on the nervous system – very little is known about this so far," explains Colette vom Berg, group leader at Eawag. "This is due to the fact that the nervous system is an extremely complex network in which numerous factors interact with each other," vom Berg adds. However, this knowledge is crucial because the developing brain of vertebrate embryos is particularly sensitive to external influences. Certain classes of insecticides, for example, are suspected of affecting the behaviour of fish by permanently altering the developing nervous system in the fish embryo.

Researchers around vom Berg, Anze Zupanic (a former group leader at Eawag) and biologist and postdoctoral researcher Roman Li have now succeeded in shedding some light on the subject - with the help of Big Data. "To do this, we mapped the complexity of biology in computer language," explains Roman Li. The result is a computer model that maps the numerous molecular processes in the developing nervous system and can, thus, make predictions about which chemicals might impair the nervous system and in what way. The basis of the model is the zebrafish, a well-studied model organism from biomedicine that is also frequently used in toxicology.

To overcome the problem of complexity, the researchers did not even try to break down the toxic effect on individual genes or proteins, but instead based their model on the so-called transcriptome. This is the totality of all genes that are activated in the entire organism at a certain point in time. It is, thus, a kind of indicator of the state of the organism. This means that different genes are activated depending on which substances are affecting the organism.

The researchers then linked these activity patterns to possible neurotoxic effects in the organism. They can now read out from the computer model whether and how a substance could lead, for example, to seizures, a disturbed sleep rhythm, microcephaly (reduced brain size) or hydrocephalus (hydrocephalus). Domoic acid (a substance produced by Cyanobacteria), for instance, is known to cause seizures in fish, which result in the animals swimming in circles more often. "The model points to a molecular mechanism that could underlie this behaviour," states Li.

Benefits for both humans and the environment

"We can now better understand what may be going on in the nervous system of zebrafish embryos at the molecular level when it is acutely or chronically exposed to chemicals," says vom Berg. Among other things, the researchers also hope to be able to identify genes or signalling pathways that could be used as markers for neurotoxicity: "Instead of examining the entire transcriptome, we could then look specifically only for the activity of these genes to get an indication of how toxic a certain substance is for the nervous system," says vom Berg.

In addition, the researchers see a broad field of application for their model, which – in line with Eawag's Open Science strategy – is available online free of charge to interested scientists. Li: "It can be used in basic research, but also in drug development and, of course, in toxicology. It, thus, serves both human health and the health of our natural environment."

Adverse outcomes that result from chemical toxicity are rarely caused by dysregulation of individual proteins; rather, they are often caused by system-level perturbations in networks of molecular events. To fully understand the mechanisms of toxicity, it is necessary to recognize the interactions of molecules, pathways, and biological processes within these networks. The developing brain is a prime example of an extremely complex network, which makes developmental neurotoxicity one of the most challenging areas in toxicology. We have developed a systems toxicology method that uses a computable biological network to represent molecular interactions in the developing brain of zebrafish larvae. The network is curated from scientific literature and describes interactions between biological processes, signaling pathways, and adverse outcomes associated with neurotoxicity. This allows us to identify important signaling hubs, pathway interactions, and emergent adverse outcomes, providing a more complete understanding of neurotoxicity. Here, we describe the construction of a zebrafish developmental neurotoxicity network and its validation by integration with publicly available neurotoxicity-related transcriptomic datasets. Our network analysis identified consistent regulation of tumor suppressors p53 and retinoblastoma 1 (Rb1) as well as the oncogene Krüppel-like factor (Klf8) in response to chemically induced developmental neurotoxicity. The developed network can be used to interpret transcriptomic data in a neurotoxicological context.
See DOI
See Institutional Repository
Li, R. A.; Talikka, M.; Gubian, S.; vom Berg, C.; Martin, F.; Peitsch, M. C.; Hoeng, J.; Zupanic, A. (2021) Systems toxicology approach for assessing developmental neurotoxicity in larval zebrafish, Frontiers in Genetics, 12, 652632 (17 pp.), doi:10.3389/fgene.2021.652632, Institutional Repository