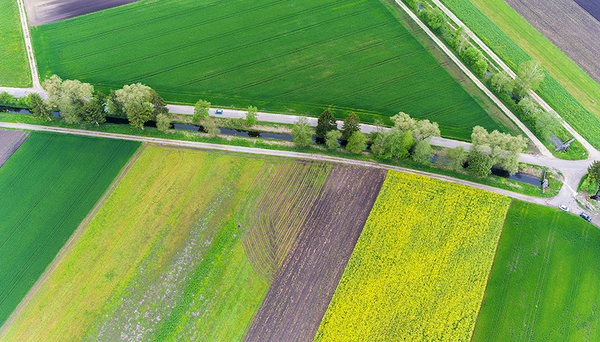 With the latest analytical methods, potentially toxic substances can be detected even at very low concentrations. However, the aim of research is not merely to document such contamination but also to understand how it occurs in streams and groundwater, and to propose mitigation measures.

In agricultural areas, large volumes of water from fields, roads and paths enter streams via manholes or other artificial drainage systems. Because this water is not purified, either at a treatment plant or by passing through the soil, these pathways – which also allow pesticides to enter surface waters – are known as “hydraulic shortcuts”. To assess their significance, scientists from the Environmental Chemistry department studied 20 catchments in the Central Plateau and the Jura region, using aerial (drone) images, drainage plans and field surveys.

In the catchments studied, the proportion of the agricultural area connected to surface waters via hydraulic shortcuts varied, depending on topography, the number of inlets and other factors. The average for all catchments was 55 per cent. The authors of the study conclude that these flow paths are responsible for considerable contamination of streams with pesticides – especially since concentrations in runoff from roads and paths may be much higher than was previously assumed. In water samples collected from storm drainage inlets, pesticide concentrations were found to be sharply increased during rainfall events. Water from these inlets would need to be diluted by a factor of up to 50 to prevent risks to aquatic organisms in streams.

A hydraulic shortcut: water from the field and country lane is transported directly into the nearest body of water by inlet shafts such as this.
(Photo: Urs Schönenberger, Eawag)

The study was carried out in connection with the national Action Plan on risk reduction and sustainable use of plant protection products. The scientists now recommend that greater attention should be paid to hydraulic shortcuts in measures designed to reduce pesticide runoff to surface waters. For example, entire catchments should in future be taken into consideration, rather than merely agricultural areas alongside surface waters. Risks could also be reduced by measures restricting hydraulic shortcut structures or requiring the use of vegetated buffer strips.

As well as field surveys, various model-based approaches, combined with geographical information systems, were employed in the study. This involved collaboration with scientists led by Peter Reichert, Adjunct Professor at ETH Zurich and, until the end of 2020, Head of Eawag’s Systems Analysis, Integrated Assessment and Modelling department. For even with extensive fieldwork, reliable conclusions as to the situation at the national level are not possible without modelling. Thanks to collaboration between environmental chemists, soil hydrologists and modelling experts, the relevant transport processes were analysed in detail and then extrapolated on the basis of statistical data for the entire Central Plateau and Jura region.

Apart from hydraulic shortcuts, other factors may also lead to peak concentrations of pesticides in surface waters. This was demonstrated by another study – involving scientists from the Environmental Chemistry, Process Engineering and Urban Water Management departments – in which the mobile mass spectro-meter MS2field was deployed on a stream for the first time. While water protection authorities usually make use of composite samples, collected over a period of several days, the MS2field system developed at Eawag can analyse samples automatically every 20 minutes. This provided a real-time picture of the highly dynamic processes of water pollution: concentrations of certain pesticides measured in individual samples were up to 170 times higher than in the 3.5-day composite samples.

The peak concentrations recorded by the MS2field system were not only higher than those found in conventional composite samples but, in several cases, they also exceeded the limits specified in the Waters Protection Ordinance, which are designed to prevent acute toxicity to aquatic organisms – by a factor of up to 30 in the case of the insecticide thiacloprid. This is relevant for the assessment of water pollution since, in some cases, peaks lasting for less than an hour can have adverse effects on aquatic organisms. If peak concentrations recur, the impact of the second or third peak may be still greater – even if it is lower than the first – as the organisms have not been able to recover in the meantime.

The example of pesticides demonstrates the value of interdisciplinary collaboration, both within Eawag and with external partners. Increasingly precise analytical methods (in the nanogram-per-litre range) are not in themselves sufficient: the risks posed by the concentrations detected need to be assessed by ecotoxicologists. Based on studies carried out by Eawag and the Ecotox Centre, substance-specific limits were introduced for twelve pesticides in the revised Waters Protection Ordinance which came into effect on 1 April 2020. In addition, analyses performed by Eawag revealed the presence not only of pesticide active substances but also of transformation products – in groundwater as well as in surface waters – which may likewise be problematic. For persistent metabolites of the fungicide chlorothalonil, elimination methods have already been tested in collaboration with water suppliers, in case the precautionary measures adopted are not sufficiently effective. Lastly, in the “Sustainable water-friendly agricultural production” project, carried out jointly with the Federal Office for Agriculture and Agroscope, measurable indicators were defined within an objective hierarchy so as to facilitate sound, transparent decision-making for policymakers and professionals. Methods of this kind have previously been used mainly in social scientific research.

This article first appeared in the Annual Report 2020