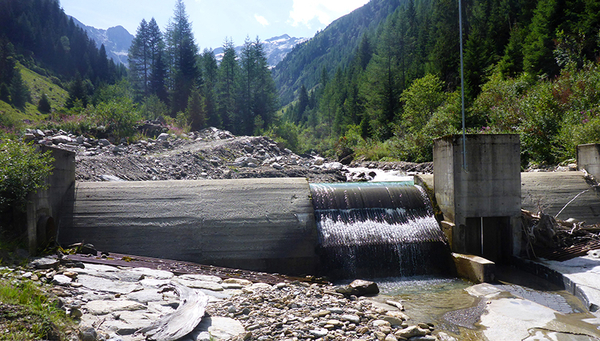 70 percent of Swiss hydropower plants - around 1500 - are considered small. They have outputs of less than ten megawatts and can benefit in part from the cost-covering feed-in remuneration (KEV). However, their share of Switzerland's total hydropower production is relatively low at around 10%. This is even more evident in the case of very small plants. All 300 KEV-supported micro plants (outputs below 100 kW) together produce 40 GWh/a. This corresponds to about one thousandth of Swiss hydropower production. Researchers have now investigated the assumption that small power plants also have small effects. [1] Thttps://www.eawag.ch/typo3/#_edn1hey come to the conclusion that plans for the use of small hydropower often take too little account of the long-range ecological effects and the cumulative effects of several plants in the same catchment area. For example, the number of species of invertebrate organisms is halved on residual water stretches. This in turn affects species that live along the watercourse, for example because the spiders on the bank lack food.

A social science study has investigated the acceptance of renewable energies. [2]https://www.eawag.ch/typo3/#_edn2 According to the results, there is strong support for the expansion of large-scale hydropower, and the respondents are also prepared to pay for it - for example with higher electricity prices if the plants have to invest in ecological clean-up measures. As soon as the local population has a say in decision-making, projects are questioned more critically or, in some cases, even combated.