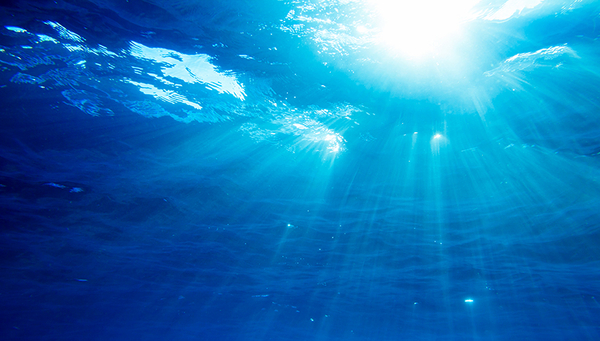 Using DNA data, researchers from ETH and Eawag have examined seawater to find not only new species of bacteria, but also previously unknown natural products that may one day prove beneficial as they report today in the journal Nature.

The oceans are teeming with countless forms of life, from the world’s largest creature – the blue whale – to miniscule microorganisms. In addition to their vast numbers, these microorganisms are also crucial for ensuring that the entire eco- and climate system work properly. For instance, there are photosynthetically active varieties such as cyanobacteria that produce around 50 percent of the oxygen in the atmosphere. Moreover, by removing carbon dioxide from the atmosphere, microorganisms help counter global warming.

Despite this significant role, research into the diversity of microorganisms found in the ocean has thus far been only rudimentary. So, a group of researchers led by Shinichi Sunagawa and Jörn Piel, both professors at the Institute of Microbiology at ETH Zurich, and Serina Robinson, group leader in the Environmental Microbiology Department at Eawag, is working to investigate this diversity.

To detect new natural products made by bacteria, Sunagawa and his team examined publicly available DNA data from 1,000 water samples collected at different depths from every ocean region in the world. The data came from such sources as ocean expeditions and observation platforms positioned out at sea.

Thanks to modern technologies like environmental DNA (eDNA) analysis, it has become easier to search for new species and discover which known organisms can be found where. But what is hardly known at all is what special effects the marine microorganisms offer – in other words, what chemical compounds they make that are important for interactions between organisms. In the best-case scenario, such compounds would benefit humans as well. Underpinning the research is the assumption that the ocean microbiome harbours great potential for natural products that could prove beneficial, for instance for their antibiotic properties.

The extracted eDNA present in the samples was sequenced by the original researchers of the various expeditions. By reconstructing entire genomes on the computer, the scientists succeeded in decrypting the encoded information – the blueprints for proteins. Finally, they consolidated this new data together with the existing 8,500 genome data sets for marine microorganisms in a single database.

This gave them 35,000 genomes to draw on when searching for new microbial species and, in particular, for promising biosynthetic gene clusters (BGCs). A BGC is a group of genes that provide the synthetic pathway for a natural product.

In this genome data, the researchers detected not only many potentially useful BGCs – some 40,000 in all – but also previously undiscovered species of bacteria belonging to the phylum Eremiobacterota. This group of bacteria had been known to exist only in terrestrial environments and didn’t exhibit any special biosynthetic diversity.

Sunagawa and his team named a new family of these bacteria as Eudoremicrobiaceae, and also were able to demonstrate that these bacteria are common and widespread: one species belonging to this family, Eudoremicrobium malaspinii, accounts for up to 6 percent of all bacteria present in certain areas of the ocean.

“The relatives in the ocean possess what for bacteria is a giant genome. Fully decrypting it was technically challenging because the organisms had not been cultivated before,” Sunagawa says. Moreover, the new bacteria turned out to belong to the group of microorganisms that boasts the highest BGC diversity of all the samples examined. “As things stand, they are the most biosynthetically diverse family in the oceanic water column,” he says.

The researchers looked at two Eudoremicrobiaceae BGCs in detail. One was a gene cluster containing the genetic code for enzymes that, according to Sunagawa, have never been found in this constellation in a bacterial BGC before. The other examined example was a bioactive natural product that inhibits a proteolytic enzyme.

Validating experiments led to a surprise

In collaboration with the group led by Jörn Piel, the researchers used experiments to validate the structure and function of both natural products.

Since E. malaspinii could not be cultivated, Serina Robinson and Piel’s team had to graft genes into a model bacterium so they would act as blueprints for the natural products. This bacterium then produced the corresponding substances. Lastly, the researchers isolated the molecules from the cells, determined the structure and validated the biological activity.

This was necessary because in one case, the enzymatic activity predicted by computer programs did not tally with the results of the experiments. “Computer predictions for what chemical reactions an enzyme will trigger have their limitations,” Sunagawa says. “This is why such predictions have to be validated in the lab if there’s any doubt.”

Doing so is an expensive and time-consuming endeavour that’s simply not viable for a database of 40,000 potential natural products. “However, our database has plenty to offer, and it’s accessible to all researchers who wish to use it,” Sunagawa says.

Beyond the continued collaboration with Piel’s group to discover new natural products, Sunagawa wants to investigate unresolved questions in the evolution and ecology of oceanic microorganisms. These include how microorganisms are dispersed in the ocean given that they can spread over great distances only passively. He also wants to discover what ecological or evolutionary benefits certain genes create for microbes. Sunagawa suspects the BGCs may play a major role.

To detect new natural products made by bacteria, the researchers examined DNA data from 1,000 water samples from every ocean region in the world.
(Picture: Helena Klein, ZHdK)

Cover picture: Blue treasure chest: The open ocean is home to a huge number of microorganisms that are a significant reservoir of natural products. (Photo: iStock)

Video on the study

Watch the video of the study on Vimeo

Created by Peter Rüegg, ETH Zürich
Share with others: