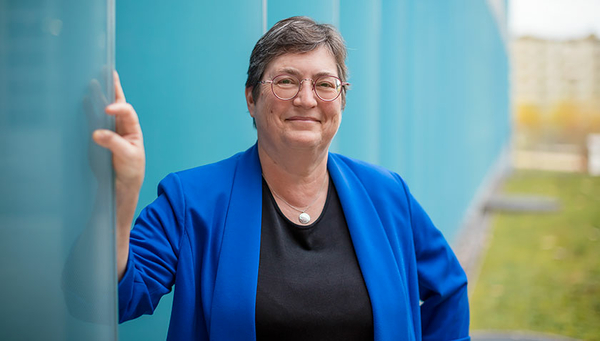 Prof. Dr Janet Hering has headed Eawag as Director since 2007. She has left a lasting mark on the aquatic research institute. Now she is retiring at the end of 2022. In this interview, she explains what the “virtuous cycle” is, why she considers networking to be enormously important and what continues to challenge water research today.

What is the first thing that comes to mind when you think of Eawag?

Eawag has been at the centre of my professional life for nearly 16 years. Eawag also played an important role in my professional development during and after my time here as a postdoctoral researcher (1988-1991). Working at Eawag provided me with many opportunities, especially to meet and work with outstanding researchers in water science and technology. I am enormously grateful for these opportunities.

What has inspired you over the years?

I have always been very impressed by the extent to which Eawag’s research and expert consulting are put into practice to improve human welfare and protect the water environment. This is a strong motivation for all of us at Eawag.

What do you think makes Eawag special?

Eawag benefits from a “virtuous cycle” in which our excellent reputation attracts outstanding staff, who then contribute to Eawag’s exceptional performance. Of course, this includes researchers at all levels – from doctoral students to joint professors – who are attracted by the excellence and applicability of our research and our collaborative research environment. These colleagues anchor Eawag in the national and international scientific community, and both contribute to and benefit from Eawag’s embedding in the ETH Domain. Eawag’s permanent scientific staff have long-term security that allows them to engage with stakeholders in policy and practice to support the implementation of Eawag’s research and expert consulting. This work benefits hugely from highly professional and very skilled technical and administrative staff who are essential to Eawag’s success.

You have dedicated your professional life to water research. What does water mean to you?

Water is a very simple molecule – just two atoms of hydrogen and one of oxygen. Yet this simplicity gives rise to properties that are essential to life and that have shaped our civilisations and even the face of our planet. I take inspiration from water. Water flows around obstacles; this inspires me to be adaptive. Over time, water can wear away the hardest stone; this inspires me to be persistent. Water has great power that can be destructive but can also be harnessed productively; this inspires me to work toward transformation.

What were the most formative developments for you during your time at Eawag?

In my postdoctoral time at Eawag, I experienced the importance of building professional networks across the international scientific community. My postdoctoral mentor and former Eawag Director, Werner Stumm, was a master at this. To my personal benefit, Werner focused on the US, where he had worked for a decade as a professor at Harvard. When I returned to Eawag as Director, I saw how effectively my predecessor, Alexander (Sascha) Zehnder, had continued this networking, increasing the focus on Europe. A strong national network emphasising inter- and transdisciplinary research with stakeholders was promoted by Ulrich (Ueli) Bundi, who served as interim Director between Sascha’s departure and my arrival. I also admire the professional networks that Eawag’s Department of Sanitation, Water and Solid Waste for Development (Sandec) has established with partners in the Global South. All of these efforts illustrate the importance of Eawag’s engagement in the international scientific community as well as with national stakeholders.

Which companions have mainly influenced, challenged and supported you?

From the beginning of my directorship, I have experienced strong support from many colleagues in leadership positions, particularly the Directorate members and Heads of the Research Departments. This is not to say that we always agreed on everything, but I hope that the basis for the decisions of the Directorate were clarified through open discussion and eventually accepted. The colleagues who served in the Directorate during my tenure have been invaluable in helping me to understand the interests, opportunities and needs across Eawag. Directorate members based in Kastanienbaum (Bernhard Wehrli, Johny Wüest and Carsten Schubert) have played a key role in integrating Eawag’s two locations. Past and present Directorate members have also maintained critically important contacts with Eawag’s stakeholders. The engagement of Eawag’s Deputy Director Rik Eggen with the Federal Office of the Environment (FOEN) and the Swiss Water Protection Association (VSA) has been particularly important. Rik also brought his historical knowledge of Eawag and its development to inform my transition into my role as Director in 2007. He subsequently played crucial roles for many years in overseeing the Support Departments and Eawag’s construction activities and liaising with the ETH Board and its Stab. Some of these activities have been taken on more recently by Gaby Mayer as Head of Operations, which allows Rik more time for his research and teaching. I have always been impressed by how well Rik has maintained his teaching and research alongside his responsibilities as Deputy Director.

What has changed since you started in 2007?

Eawag has certainly grown since 2007. This can be seen from a few statistics. Eawag researchers published 202 papers in peer-reviewed journals in 2007 compared with 526 in 2021. Over the same period, expenditures for personnel increased from 37.9 million Swiss francs (supporting 380 FTEs) to 55 million Swiss francs (supporting 517 FTEs). Despite this growth, I hope that Eawag has been able to keep its community feeling and collaborative attitude.

There has been a natural turnover in Eawag’s leading researchers as senior colleagues retire and new tenure-track research group leaders are hired. During my tenure as Director, many retiring colleagues were intellectual leaders in their fields and often joint or adjunct professors at ETH Zurich or EPFL. While the replacement of such prominent individuals can seem impossible, I am very proud of the research group leaders who have been hired during my tenure. Many of them have already advanced to leading positions with Eawag and some have been appointed as adjunct or joint professors.

The physical campus has also changed. The Forum Chriesbach building had been open for less than half a year when I arrived in January 2007. This innovative building is a tribute to the vision of Sascha Zehnder and Ueli Bundi. Since then, we have had major reconstructions to our office and laboratory buildings, both in Dubendorf and Kastanienbaum. We have also opened new buildings, the Aquatikum in 2015 and FLUX in 2021. The Aquatikum was the first laboratory building in Switzerland to receive the Minergie P-Eco Certificate, a tribute to Eawag’s commitment to sustainability.

Another important development was establishing a joint library for the four research institutes of the ETH Domain, Lib4RI, in 2011. This replaced the Empa-Eawag library that existed when I arrived. Thanks especially to the Head of the Lib4RI, Lothar Nunnenmacher, the 4RI staff enjoys outstanding library services.

What were the most significant challenges for an aquatic research institute then? What are they today?

The overarching challenge remains the same – that is, to meet direct human needs for water while preserving the capacity of the water environment to provide ecosystem services. Within this overarching challenge, different aspects may emerge as particularly salient over time. For example, the impacts of climate change on aquatic ecosystems and biodiversity in Switzerland are more obvious today than they were in 2007. This has motivated research not only on the impacts of climate change but also on adaptation and mitigation. Even in 2007, the indirect carbon dioxide emissions of wastewater treatment plants, associated with energy consumption, were being addressed at Eawag through research on reducing the oxygen demand of nitrogen removal. Subsequently, nitrous oxide emissions have been identified as an important contributor to the greenhouse gas emissions of wastewater treatment plants. Eawag’s research provides the basis to understand and reduce these emissions.

You are a US-American. Have there been any surprises for you in Switzerland because of this background?

I experienced most of those surprises during my postdoctoral stay. A lot of things were harder then, like not being able to do grocery shopping in the evenings or on Saturday afternoons. As I took on my leadership role in 2007, I was surprised at the reliance on informal channels for information exchange. Over the years, I have tried to provide more systematic information on processes and resources.

Is there anything you were not able to implement?

In 2017, I had an idea to apply text and data mining to analyse Eawag’s publications. I hypothesised that such analysis could provide information allowing researchers to design their projects more efficiently and with less duplication of effort and to identify colleagues (within Eawag) who could provide useful input to planned projects. Unfortunately, the implementation of this idea would have violated Swiss copyright law at that time. Although the law was subsequently changed, I didn’t have the time to return to this idea.

You were the first female director of Eawag. What advice do you have for women in research today?

The key point to keep in mind is that you are not alone. There are increasing numbers of women in research who can share their experiences and support each other. Many men are also supportive, either because they have similar concerns about accommodating professional and personal responsibilities or because they recognise the benefits that diversity brings to fostering innovation in research (or indeed both). Working together to find collective solutions is, in my view, the path to sustainable success.

What is next for you after you retire? Do you have any plans, and if so, what are they?

After my holidays and a three-week stay at Arizona State University (ASU), I will be based in Zurich for at least the next few years. In January, I will engage with ASU’s Global Institute of Sustainability and Innovation to gather ideas for my farewell lecture on “Actionable Research for the Sustainable Development Goals” (on 18 April at ETH Zurich and on 25 April at EPFL). In addition to preparing my farewell lectures, I will continue to serve on some advisory boards and participate in university evaluations. I also intend to continue supporting women in academic leadership since I feel that my experience positions me to make valuable contributions to this important issue.

Prof. Dr Janet Hering was Director of Eawag and Full Professor of Environmental Biogeochemistry at ETH Zurich and Professor of Environmental Chemistry at EPFL from 2007 to 2022. As Director, Janet Hering made a significant contribution to developing Eawag into a globally recognised research institute. In particular, she strengthened the scientific output of specialist publications and the mentoring of young researchers. Janet Hering also paid great attention to the exchange between science and the public and authorities. Janet Hering researches the treatment of contaminated water to produce drinking water, the biochemical behaviour of trace metals and increasingly the exchange of knowledge between research, society and politics. She received her PhD in oceanography from the Massachusetts Institute of Technology (MIT) in 1988 and was a professor of environmental science and technology at the California Institute of Technology and the University of California from 1991 to 1996 and again from 1996. Janet Hering has been a strong advocate for diversity and the increased representation of women in scientific leadership and professorships during her time as professor and director.

Cover picture: Prof. Dr Janet Hering has been Director of Eawag since 2007 and has left a lasting mark on the aquatic research institute. (Photo: Eawag, Alessandro Della Bella)

Hering, J. G. (2022) “Women’s success in academic leadership can and should be robust, not fragile”, Carte Blanche blog post, SCNAT, (also published in German and French)

Farewell - Eawag Seminar with
Janet Hering: «Ask me anything…» 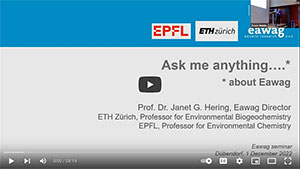