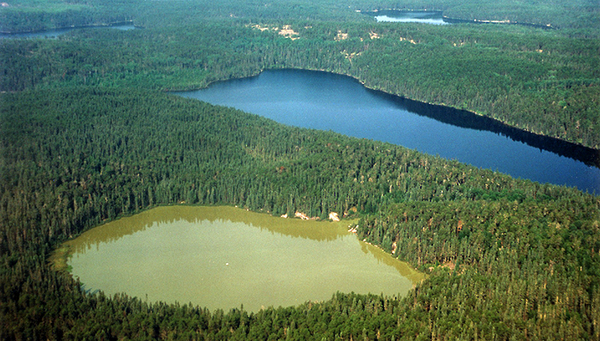 Evolution plays a crucial role in ecosystem tipping points, as shown in two recently published studies by Eawag researchers. If this influence is taken into account, ecosystem collapses can be better predicted in the future. At the same time, the studies reveal how the risk of ecosystem collapse can be reduced and the chances of recovery increased.

Shallow lakes can remain clear and dominated by macrophytes (rooted aquatic plants) for years despite increasing nutrient inputs, but then suddenly, lose their macrophytes and become turbid. This collapse or abrupt transition to a completely different condition of the lake is a classic example of ecosystem tipping points. Tipping points have been documented in a variety of ecosystems including coral reefs, deserts, and oceans. In these ecosystems, researchers have observed abrupt transitions that have negative effects for the species that inhabit them, and for the people that receive benefits from them. In aquatic ecosystems, for example, tipping points have marked the collapse of fish populations with devastating socioeconomic impacts for the people whose livelihoods depends on the health of these populations. One of the main concerns is that once they happen, these transitions are difficult to reverse, even if stressors, such as nutrient inputs in shallow lakes, are removed. Hence, researchers have devoted much work to predict and prevent such transitions.

Although ecologists have studied how environmental changes driven by human activities have produced evolutionary changes in ecosystems, until now, researchers did not know how evolutionary processes influence ecosystem tipping points. In two recent studies, researchers at Eawag together with international partners found that evolution may play in our favor or against.

In one of these studies, they challenge the idea that ecosystem collapses occur when tipping points are exceeded. According to the findings, fast environmental changes, like those currently occurring, increase the probability of ecosystem collapses, even before tipping points are exceeded. However, if evolution can help the species to adapt to the changing conditions, the collapse could be delayed.

Once an ecosystem collapses, researchers found in the second study, evolution may delay ecosystem recovery. Based on ecological processes only, ecologists predict that once the environmental stressor is reduced below the tipping point of recovery (figure 2), the ecosystem should return to its pre-collapse state. For instance, if the nutrient concentration in a shallow lake is reduced to very low levels, the lake should quickly transition back to the clear-water state dominated by macrophytes. However, this may not be the case when evolution enables species to adapt to the conditions in the collapsed ecosystem. If the species become adapted to these conditions, the ecosystem may take a long time to return to the pre-collapse state after stressors are removed. Adaptation is a process that requires time, therefore the longer the ecosystem passes in the collapse state the further the adaptation advances. To avoid such adaptation to unwanted conditions, restoration activities, such as the reduction in nutrient input in lakes, should be implemented as early as possible in the collapsed ecosystem to increase the chances of recovery.

Created by Catalina Chaparro / Claudia Carle
Share with others: