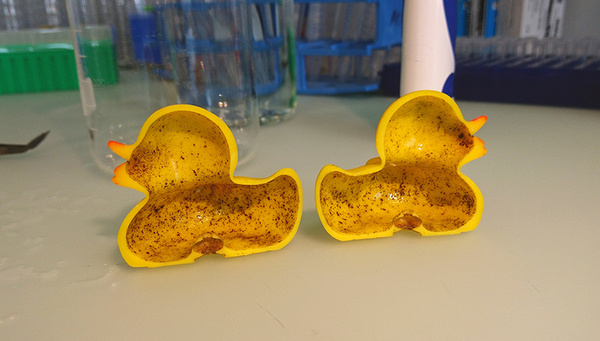 Rubber ducks and crocodiles have always been popular bathtime companions. An Eawag study has now revealed the “dark side” of flexible plastic bath toys. Diverse microbial growth is promoted not only by the plastic materials but by bath users themselves.

Warm, humid bathrooms provide ideal conditions for the formation of bacterial and fungal biofilms – for example, on shower curtains or behind cabinets. This applies in particular to rubber ducks and other bath toys. Dense growths of bacteria and fungi are found on the inner surface of these flexible toys, and a murky liquid will often be released when they are squeezed by a child. A group of researchers from Eawag, ETH Zurich and the University of Illinois have now studied the factors that favour microbial growth and the types of microorganisms present in bath toys.

In the study, they characterized biofilm communities inside used bath toys. They also carried out controlled experiments with new bath toys, under conditions simulating household use: over a period of 11 weeks, some of the toys were exposed to clean and others to dirty bath water (including constituents such as soap, human body fluids and bacteria). The bath toys were subsequently bisected and analysed in the laboratory. The findings sound unappetizing: between 5 million and 75 million cells per square centimetre were observed on the inner surfaces. However, the composition of the biofilm communities varied widely, especially among the bath toys from real households, but also between the two control groups. Fungal species were detected in almost 60% of the real bath toys and in all the dirty-water control toys. Potentially pathogenic bacteria were identified in 80% of all the toys studied, including Legionella and Pseudomonas aeruginosa, the rod‑shaped bacterium often implicated in hospital-acquired infections.

The scientists then assessed the various factors influencing biofilm formation. Because of its low nutrient concentrations, tap water does not typically promote microbial growth. However, the toys themselves provide a source of nutrients: the plastic materials – often low-quality polymers – release substantial amounts of organic carbon compounds. During bathing, other key nutrients such as nitrogen and phosphorus, as well as additional bacteria, are contributed by the human body (body fluids such as urine and sweat), external contaminants and personal care products.

First author of the study is the microbiologist Lisa Neu. In her doctoral research, she is investigating –more generally – biofilm formation and how plastic materials influence microbial processes in potable water. Her supervisor, Frederik Hammes, is not surprised by the findings: “Mouldy bath toys are widely discussed in online forums and blogs, but they have received little scientific attention to date.” In fact, he adds, they are extremely interesting for researchers, as they represent “the junction between potable water, plastic materials, external contamination and vulnerable end-users”. The vulnerable users in question are children who may enjoy squirting water from bath toys into their faces. Hammes comments: “This could strengthen the immune system, which would be positive, but it can also result in eye, ear, or even gastrointestinal infections.”

This study was funded by the Swiss National Science Foundation as part of a project investigating the causes and consequences of bacterial growth in premise plumbing systems (Microbi-Home, project no. 163366)

They may be used free of charge only in connection with this release and are not to be archived.

The “dark side” of bath toys. Photos: Eawag.

Scanning electron micrograph of a biofilm on the inner surface of a bath toy. Colours were added artificially to highlight the varied structures. (Image: Center for Microscopy and Image Analysis, University of Zurich)