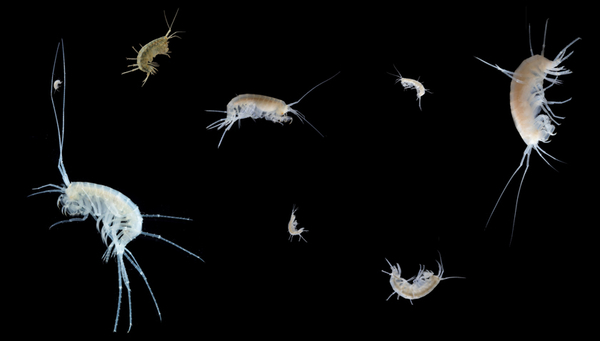 Europe has relatively low biodiversity compared to most other continents because many species became extinct during the ice ages. In subterranean ecosystems, however, which were shielded from climatic turbulences, a great diversity of ancient species were able to survive. This is the conclusion of a study on the amphipod genus Niphargus.

Around 30 million years ago, numerous mountain ranges began to form in south-eastern Europe as a result of the collision of the European, Adriatic and African tectonic plates. Where these consisted of limestone – such as in the south-eastern Alps, the Carpathians and the Dinaric Alps – caves developed in the rock at the same time under the influence of precipitation. When living organisms colonise newly created habitats such as these caves and find sufficient ecological resources there, a rapid emergence of new species can occur: the immigrated parent species fans out into numerous new species that specialise in the various niches within the new habitat. This basic mechanism of evolution is called “adaptive radiation” and is responsible for much of the biodiversity on Earth. In Europe, however, during the Pleistocene period with its constant alternation of cold and warm periods, a large part of the biodiversity that developed in this way became extinct or migrated to other regions. Therefore, in terms of biodiversity, Europe occupies the lowest ranks among the continents in most species groups. Only Antarctica has fewer species.

Habitats sealed off from climate chaos

Now, a study which was recently published in the journal “Nature Communications” by Ole Seehausen, Head of the Fish Ecology & Evolution Department at Eawag, and a team of scientists from the University of Ljubljana and the Agricultural Institute of Slovenia, provides evidence that a large proportion of ancient biodiversity has been able to survive in subterranean habitats sealed off from climate chaos. Previously, there were only isolated indications for this. Seehausen and his research colleagues have now been able to substantiate this assumption for the amphipod genus Niphargus. Amphipods are crustaceans of a few millimetres to a few centimetres in size that live in bodies of water. The genus Niphargus is only found underground, in cave water or in groundwater. “Niphargus is the most species-rich of the amphipod genus and includes hundreds of species whose origins we have studied using various evolutionary genetic modelling techniques,” explains Seehausen. “The results show that this biodiversity developed 15 million years ago, exactly when and exactly where new subterranean habitats formed with the caves in the limestone mountain ranges.” This correlation suggests that colonisation of the new subterranean habitats is the trigger for the fanning out of this amphipod genus into an enormous number of new species.

Numerous new species of Niphargus amphipods evolved from one parent species, each with a different size and shape and inhabiting different subterranean habitats and niches. (Photos: Denis Copilaş-Ciocianu, Teo Delić)

Pollution of the groundwater as the greatest danger

Thus, ironically, such an inhospitable habitat as underground, where there are few nutrients and no light, seems to be a haven of biodiversity in Europe. If their hypothesis can be generalised, the researchers believe that unknown ancient species should also be found among other cave-dwelling organisms. Whether these will ever be discovered, however, also depends on how long they can defy the encroachment of their habitats by humans. Today, the greatest danger to subterranean biodiversity, which has survived all the ice ages, comes from groundwater pollution.

The larger the circle, the greater the number of species in the corresponding group. The groups are named and numbered according to the mountain regions in which they occur:
1. Pontic
2. Pannonian
3. North Dinaric
4. South Dinaric
5. West Balkan
and 6. the Apennine group.

A subterranean adaptive radiation of amphipods in Europe

Adaptive radiations are bursts of evolutionary species diversification that have contributed to much of the species diversity on Earth. An exception is modern Europe, where descendants of ancient adaptive radiations went extinct, and extant adaptive radiations are small, recent and narrowly confined. However, not all legacy of old radiations has been lost. Subterranean environments, which are dark and food-deprived, yet buffered from climate change, have preserved ancient lineages. Here we provide evidence of an entirely subterranean adaptive radiation of the amphipod genus Niphargus, counting hundreds of species. Our modelling of lineage diversification and evolution of morphological and ecological traits using a time-calibrated multilocus phylogeny suggests a major adaptive radiation, comprised of multiple subordinate adaptive radiations. Their spatio-temporal origin coincides with the uplift of carbonate massifs in South-Eastern Europe 15 million years ago. Emerging subterranean environments likely provided unoccupied, predator-free space, constituting ecological opportunity, a key trigger of adaptive radiation. This discovery sheds new light on the biodiversity of Europe.
See DOI
See Institutional Repository
Borko, Š.; Trontelj, P.; Seehausen, O.; Moškrič, A.; Fišer, C. (2021) A subterranean adaptive radiation of amphipods in Europe, Nature Communications, 12, 3688 (12 pp.), doi:10.1038/s41467-021-24023-w, Institutional Repository