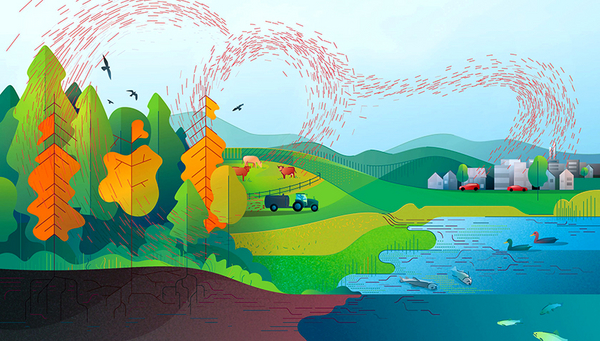 A factsheet from the Swiss Academy of Sciences (SCNAT) shows: Too much nitrogen and phosphorus is released into the Swiss environment. There they damage biodiversity, forests and water bodies, exacerbate climate change and affect human health. Actually the causes are known.

With the help of Eawag researchers, the Swiss Academy of Sciences have collected facts on the problem of excessive nitrogen and phosphorus pollution in the environment. The two substances originate mainly from agriculture and transport. If the Federal Council's reduction targets are to be met and the negative effects reduced, the causes of the excessive inputs must be tackled urgently, the academies write in the compilation.

Nitrogen emissions mainly are spread through the air. Many habitats in Switzerland are over-fertilised due to excessive nitrogen inputs. On average across Switzerland, 3 to 30 times more nitrogen reaches the soil via the air than under natural conditions; at certain locations, this figure is much higher. Polluted air, polluted groundwater, monotonous habitats - excessive nitrogen inputs are one of the main causes of the decline in biodiversity in Switzerland and result in external costs of CHF 860 to 4,300 million annually.

Phosphorus inputs to water bodies primarily are dissolved in water or bound to solid components. In polluted lakes, there is still a lack of oxygen at depth, which prevents the reproduction of certain fish species. The water quality of many small lakes is impaired.

The researchers recommend various measures to improve the situation. These include, in particular, adapting agricultural production intensity to the ecological carrying capacity of the site and promoting plant-based versus animal-based foods — both for consumption and production.

Guntern Jodok et al. (2020): Excessive nitrogen and phosphorus inputs damage biodiversity, forests and water bodies (in German and French). Swiss Academies Factsheet 15 (8) DOI: 10.5281/zenodo.4269631; developed from a collaboration of scientists from Eawag, WSL, Agroscope, PSI, the University of Zurich and ETH Zurich. Published by the Biodiversity Forum of the Academy of Natural Sciences.