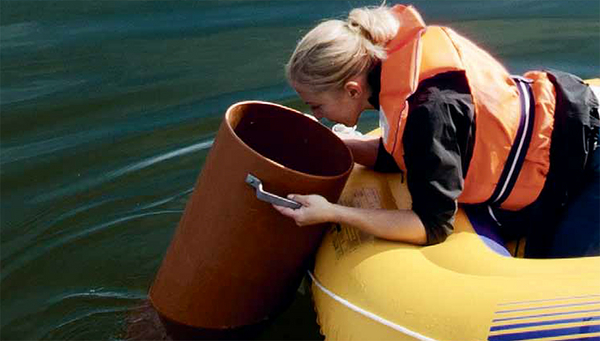 Lakes are major ecosystems. Their secrets have been investigated in Switzerland for more than 100 years. Nonetheless, scientists and their partners at the federal and cantonal specialist departments can still be surprised. For example, a fish in Lake Constance that had been declared extinct, or the results of Roman forest clearing around Lake Murten or concentrated antibiotic-resistant genes in the vicinity of wastewater discharges in Lake Geneva.

A good 250 experts from the scientific and water-management fields as well as government administration and politics are coming together to hear about new findings and trends in lake research today, Tuesday 6 September. They are attending the Info Day organised by the water research institute Eawag. This year, on the occasion of the 100-year anniversary of the lake research laboratory at Kastanienbaum, it is taking place on Lake Lucerne, in the Swiss Transport Museum in Lucerne. Below is some information about three of the ten speakers. Full information may be found in the proceedings [pdf].

More than 70 fish species, but still little life in the depths

From 2010 to 2015, Eawag, together with the cantons, the Federal Office for the Environment, the University of Bern and the Bern Natural History Museum as well as further partners, investigated the biodiversity of fish in the lakes in the Alpine region in the far-reaching “Projet Lac”. More than 70 fish species were documented in this study. Whitefish dominated down to great depths, but only in the cleanest lakes. Perch and carp dominate in the lakes that are now, or were in the past, nutrient rich. Many species from very deep waters, above all whitefish and char, are found only in those lakes where, in the course of evolution, at least since the last ice age, originated by adjusting to the extreme environments. In most of the lakes however, former deep-water fish species have been lost. In the 197-meter deep Lake Zug, for example, there are hardly any fish below 30 meters.

“Projet Lac” also brought good news: thanks to a targeted search in Lake Constance, several specimens of the deep-water char (Salvelinus profundus) native to the lake were rediscovered. This species, frequently caught by Lake Constance fishermen until the 1960s, was declared extinct by the International Union for Conservation of Nature IUCN in 2008. The deep-water char is found at a depth of about 80 meters and feeds on flatworms, small crustaceans and mussels. The size of the population from which these recently found specimens come will be investigated in the future.

It has long been known that historical information is accumulated in lake sediments – from the lake dwellers to the emergence of pollutants to the caesium rain from Chernobyl. Now Eawag researchers have gone a step further with a 10-meter long sediment core from Lake Murten. From the stored information they have reconstructed the land-use history around the lake. In approximately 100 BC, when the Romans began to clear large stretches of forest around the lake, a rapid change can be seen in the sediments: within a short time, a great deal of soil was washed into the lake, and with it many nutrients. Thus Lake Murten was already suffering from eutrophication 2,000 years ago. It was not until the fall of the Roman Empire and several periods of markedly colder climate at the beginning of the Middle Ages that the eutrophication declined. What effects this phase during Roman times had on the ecology of the lake has yet to be researched more closely.

Water-treatment plants are where faecal and many other types of bacteria, as well as a cocktail of antibiotic residues and other harmful substances come together in relatively warm water. Under these conditions, resistance genes can be transferred to formerly antibiotic-sensitive species or to environmental bacteria. Such resistant bacteria are released into the environment along with the treated water. Eawag has shown in a study of the sediment of Lake Geneva near Lausanne that resistant genes occur more often near a discharge location than further away (see illustration). The health risks of such pollution are minimal. However, the researchers involved in the study urge that when water treatment plants are furnished with treatment stages against micro pollution, as much antibiotic resistance as possible should be removed at the same time, before this enters the environment.

Gratis use only in connection with an article about the Info Day, no archiving. Source: Eawag

Even the smaller fish are recorded systematically and using standardised methods in Projet Lac, here on Lake Brienz.

On the left a drawing of the Lake Geneva whitefish, an unfortunate victim of definite extinction, and on the right a specimen of the deep-water char (Salvelinus profundus), long believed to be extinct, found in Lake Constance.

Relative frequency of a gene for sulphonamide resistance in Lake Geneva near Lausanne. The treated water from the wastewater-treatment plant enters the lake at the white point.