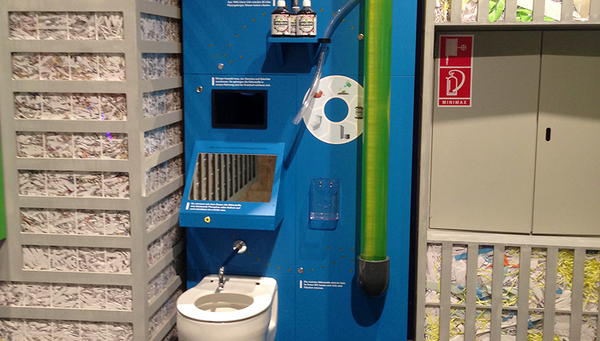 The VUNA recycling process, which recovers nutrients from urine, recently had its own display as part of an exhibition at the “Umwelt Arena” (Environment Arena) in Spreitenbach. Eawag’s exhibit was designed to raise awareness amongst visitors to the exhibition of the fact that wastewater also contains reusable substances, which can be used, for instance, for making fertilizers.

“We see the exhibition in the Environment Arena as a unique opportunity to promote our technology to a wider audience over a reasonably long period of time, and to raise awareness among the public about wastewater recycling,” says Bastian Etter, who is in charge of the display in the exhibition hall – a venue with a capacity of over 4,000. “The original concept has not been altogether straightforward to implement,” adds Anita Wittmer, who realised the construction of the exhibition display in collaboration with the Eawag workshop. “In the end, though, a fantastic interactive exhibit has been created.”

Three years for the exhibition

Opened in 2012, the Environment Arena is located in the vicinity of the Shoppi Tivoli shopping centre in Spreitenbach, in the canton of Aargau, and can be reached by bicycle, S-Bahn and bus from Zurich, as well as by car. In its own words, it offers “sustainability to touch and experience” through changing exhibitions, and is especially popular with schools. The Environment Arena offered Eawag exhibition space for three years for the exhibit on urine recycling, which provides an unusual opportunity to raise awareness of this practically-oriented research project as well bringing the research institute in general into the public eye.