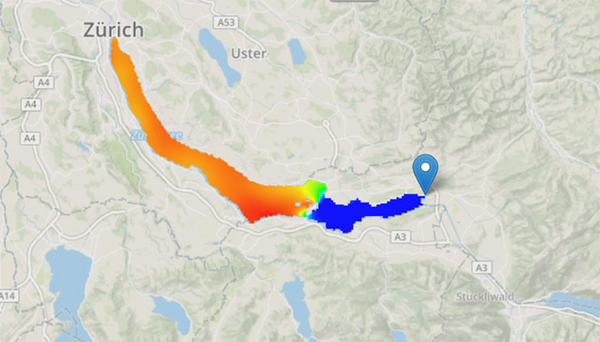 The summer heat has reached Switzerland and cooling down in the lake certainly does no harm. On the website "Meteolakes" you can find out how refreshing a dip in Lake Zurich will be at the moment, the next hours and days.

Two years ago, researchers from Eawag and EPFL posted a publicly accessible 3D model on www.meteolakes.ch* that uses current and forecast data from MeteoSchweiz, hydrological data from the Federal Office for the Environment and satellite data to map lake water temperatures. The temperatures are calculated for different depths and with a temporal resolution of three hours. The model can forecast five days into the future. So far, models have existed for Lake Geneva, Lake Biel and Lake Greifen. Lake Zurich was added this week.

Lake Zurich is made up of two sections separated by a spit of land and earth deposits: Obersee and Untersee. The new model shows that Obersee is colder than Untersee. Obersee is strongly influenced by the inflowing Linth. According to Damien Bouffard, correctly modelling the temperatures for both basins was the tricky part of Lake Zurich. Damien Bouffard of Eawag leads the Coresim project behind Meteolakes, a platform developed by Theo Baracchini as part of his doctoral thesis.

The aim of the research team is to create added value for other scientists. Today, many lakes are only measured on a monthly basis. Researchers who want to link their own data, for example on the distribution of nutrients in the lake, with lake physics can now use meteolakes to access high-resolution data. Whether even more lakes will appear on the platform in the future depends above all on the needs of researchers. "If our model helps the scientific community to answer research questions, we will gradually extend the platform to other lakes in Switzerland," says Bouffard.