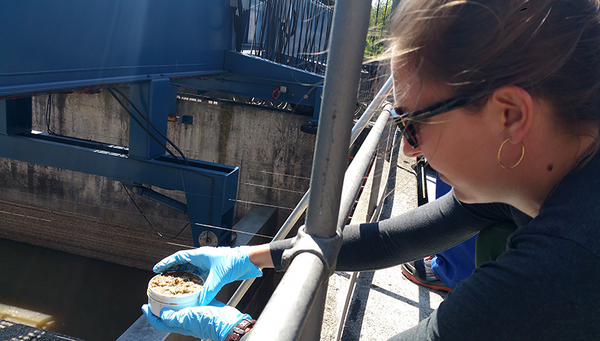 Mercury is extremely toxic for humans and ecosystems. It evaporates very quickly, is transported in the air over long distances and accumulates in organisms. The heavy metal has therefore been known for decades as a pollutant of global significance and is banned in Switzerland for almost all applications. However, if old thermometers break, for example, mercury still ends up in wastewater. There have been no representative studies to date on what quantities actually flow into wastewater treatment plants (WWTPs) and how effectively they filter out the toxic substance.

In a study just published in the journal “Aqua&Gas”, researchers from Eawag in collaboration with the FOEN have now shown that Swiss WWTPs filter out 96 percent of mercury. Expressed in figures: Every year, 130 kilograms of mercury enter the WWTPs with the wastewater, of which 5 kilograms are discharged into streams and rivers. “Compared to the total amount of mercury in Swiss surface waters, however, the inflow from wastewater treatment plants only accounts for about 1.5 to 3 percent,” says Michael Berg, geochemist at Eawag and co-author of the study. The remaining mercury is discharged into the aquatic environment from diffuse, as yet unidentified sources, for example by atmospheric transport from the oceans or soil, or leaching from historically contaminated sites or sediments.

Compared to other countries, relatively little mercury enters waste water treatment plants here and the figures are similar to those in Canada or England. The highest mercury levels are found in WWTPs in western Switzerland, especially in the regions where the watch and jewellery industry is located. On the other hand: “Whether the mercury actually originates from these regions or was transported through the atmosphere from far away would have to be investigated more closely,” says Michael Berg. The concentrations measured in the water are, however, harmless to health.

Basis for the Minamata Convention

The study comes at an important time. For the Minamata Convention, which came into force in 2017, requires all countries to draw up an inventory of mercury concentrations in their waters. The aim of the convention is to contain and monitor mercury emissions worldwide. Because the study by Eawag researchers is representative of other developed countries around the world, it now provides methods and figures for the inventory.

Determined total mercury loads of Swiss WWTPs and surface waters. The contribution of WWTPs to the total mercury load of surface waters in Switzerland is relatively small at about 1.5-3%. Examples of potential diffuse sources are atmospheric deposition, soil erosion and runoff, or historical sources such as mercury in lake sediments from previous depositions. (Graphic: Michael Berg)

Mercury loads and fluxes from wastewater: a nationwide survey in Switzerland

Mercury (Hg) pollution threatens ecosystems and human health. Wastewater treatment plants (WWTPs) play a key role in limiting Hg discharges from wastewaters to rivers and lakes, but large-scale studies to estimate Hg loads and discharge at national levels are scarce. We assessed the concentration, flux, speciation, and removal of Hg in municipal wastewater throughout Switzerland by investigating 64 WWTPs in a pre-study and a subset of 28 WWTPs in the main study. We also studied the behavior and pathways of Hg along the various treatment steps in a state-of-the-art WWTP. The resulting dataset, representative of industrialized countries, provides an overview of (i) current Hg concentration ranges, (ii) average per capita loads, and (iii) wastewater Hg inputs into surface waters. The results allowed estimation of a total Hg (THg) load in Swiss wastewater of 130 ± 30 kg THg/year (15.7 mg/capita/y), of which 96 ± 4% is retained in sewage sludge. About 4.7 ± 0.5 kg THg/year (0.57 mg/capita/y) is discharged with the treated wastewater into surface waters. This corresponds to only 1.5-3% of the THg load carried by the major Swiss rivers, indicating that >95% of riverine Hg originates from other sources. Extrapolation to the population of Europe would yield a total amount of 11,700 kg THg/year in raw wastewater, with some 480 kg THg/year discharged to surface waters. Monomethyl mercury on average accounted for 0.23% of THg, and its fraction remained constant along the different treatment steps.
See DOI
See Institutional Repository
Suess, E.; Berg, M.; Bouchet, S.; Cayo, L.; Hug, S. J.; Kaegi, R.; Voegelin, A.; Winkel, L. H. E.; Tessier, E.; Amouroux, D.; Buser, A. M. (2020) Mercury loads and fluxes from wastewater: a nationwide survey in Switzerland, Water Research, 175, 115708 (10 pp.), doi:10.1016/j.watres.2020.115708, Institutional Repository
Created by Stephanie Schnydrig
Share with others: