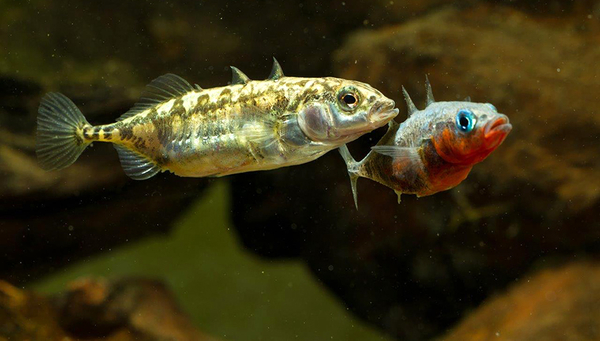 Sometimes evolution proceeds much more rapidly than we might think. Genetic analysis makes it possible to detect the earliest stages of species formation and to gain a better understanding of speciation processes. For example, a study just published by researchers from Eawag and the University of Bern – investigating rapid speciation in threespine stickleback in and around Lake Constance – shows that a species can begin to diverge very rapidly, even when the two daughter species breed alongside one another at the same time.

The innumerable three-spined stickleback which end up in fishermen’s nets on Lake Constance are an unwanted by-catch. Unlike some other species, these tiddlers – of no commercial value – appear to be relatively unaffected by lake eutrophication, bank stabilization and channelization. This species has been spreading rapidly throughout the Swiss Central Plateau for around 150 years. Now, an elaborate genetic study conducted by researchers at Eawag and Bern University helps to explain the secret of its success: the stickleback can evidently adapt very rapidly to new habitats – so rapidly that, for evolutionary biologists, it serves as a model for the divergence of a single species into two or more distinct species. Rather than just one “Lake Constance stickleback”, the researchers found two different forms – typical of the lake and of inflowing streams – even though lake stickleback migrate into these streams during the spawning season.

According to first author David Marques (the study is part of his doctoral research), “It was completely unexpected for the species to diverge over such a short period, given that the sticklebacks breed at the same time and at the same sites.” Usually, independent species develop by adapting to different habitats and reproducing isolated from other populations – at different depths of a lake, for example. Among whitefish, different breeding and spawning seasons have additionally evolved.

Adaptation to lake or stream habitat

For the researchers, it is fascinating to observe the incipient speciation now occurring in the stickleback: this has only become possible in recent years, thanks to technical advances in DNA sequencing. The scientists identified almost 40 genomic regions, spread across 11 chromosomes, where the “lake stickleback” differ from the “stream stickleback”. More than half of these so-called genomic islands of differentiation show differences irrespective of whether the stickleback reproduce in the same area or in different areas. Marques says: “That’s important evidence suggesting that these fish – adapting to the lake or stream habitat – are in the process of developing into new species.” However, rather than using the term “new species” to describe this early stage of speciation, the researchers prefer to speak of “ecotypes”, as it remains uncertain whether they will ever develop into fully isolated species. Studies of whitefish in Swiss lakes and cichlids in Lake Victoria (East Africa) – conducted by Professor Ole Seehausen of Eawag – have shown that such ecotypes and young species are often sensitive to environmental changes and may even merge again. However, the Lake Constance stickleback already appear to be more robust in this respect: genomic differentiation was found to be concentrated in regions with low recombination rates.

As well as being visible in computer diagrams, the genetic differences correspond to phenotypic traits of the two ecotypes: for example, lake stickleback have wider lateral plates and longer spines, providing better protection against the predatory fish and birds mainly found in and on the lake. In addition, lake stickleback males have a darker red throat than those living in streams. The substantial numbers of stickleback currently found in Lake Constance are perhaps a result of successful adaptation to the lake habitat; stickleback in the lake live longer and grow to a larger size, on average, than their close relatives in the streams.

What is a species?
Various species concepts are found in biology. What all have in common is that populations of organisms are assigned to different species if they coexist in nature over many generations at the same site without genetically merging. Numerous species hybridize occasionally but remain differentiated if mechanisms exist to restrict gene flow. The definition of a species as a group of individuals not capable of interbreeding with members of other species is an outdated view.

Preparations for sequencing in a laboratory at Eawag’s Kastanienbaum site. With the latest molecular genetic methods, it is possible to observe almost in real time when and how species divergence begins.
Photo: Eawag, Aldo Todaro

Lake (left) and stream (right) ecotypes of three-spined stickleback (Gasterosteus aculeatus) from the Lake Constance catchment. The two specimens pictured at the top are females, those in the middle are males with typical breeding coloration, and those at the bottom are alcohol‑preserved males with bones stained red. The lake ecotype has longer spines and larger bony lateral plates than the stream ecotype, providing better protection against predators (piscivorous fish and birds). The two ecotypes also differ in body size, head shape, and body and breeding coloration.
Photo: Eawag