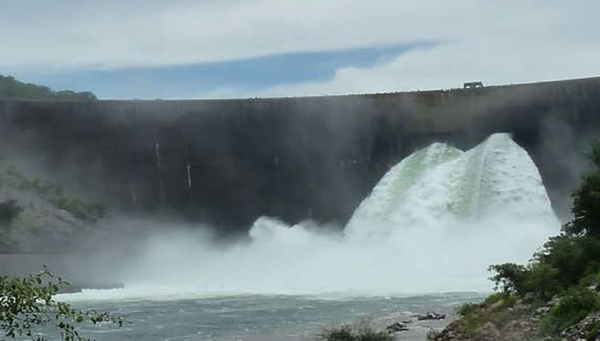 Hydropower is considered to be CO2-neutral, but certain power plants in tropical regions produce large quantities of greenhouse gases. Researchers at Eawag have now studied how much carbon dioxide escapes into the atmosphere below the Kariba Dam in southern Africa. Such previously ignored emissions must be taken into account by future carbon budgets.

The Kariba Dam is huge. A veritable behemoth made of one million cubic metres of concrete. It was built in 1959, five years before the independence of Zambia and Zimbabwe, which were then called Northern and Southern Rhodesia, respectively, as British colonies. "The dam was a colonialist project to supply electricity for the copper mines in northern Zambia," says Bernhard Wehrli, head of the Aquatic Chemistry research group at Eawag.

The curved wall, up to 24 metres thick and 128 metres high, dams the Zambezi River at the end of the Kariba Gorge to form the largest artificial lake in the world. Its surface area is ten times that of Lake Constance. "The Kariba Dam is oversized; today it would be built smaller," says Elisa Calamita, a postdoctoral researcher at Eawag's Surface Waters department. The water remains in the lake for an average of three years before it thunders through the power plant's turbines. During these three years, biogeochemical processes ensure that organic material decays - and greenhouse gases such as carbon dioxide are formed in the Kariba reservoir.

Fluctuations throughout the year and during the day

In a recently published study, Calamita and Wehrli, in collaboration with colleagues from Italy and the Netherlands, analysed for the first time how much carbon dioxide escapes into the atmosphere below the dam. Two factors are decisive. One is the stratification in the lake. In January and February – the summer months in the southern hemisphere – the water at the surface warms up to 25 degrees. Warmer water expands more resulting in a lower density. It lies like a lid on top of the colder water masses, where the carbon dioxide concentrations increase markedly until, in July, the uppermost layer mixes with the 18-degree water at greater depth, because at this time the air has cooled down to 10 degrees and strong winds trigger the mixing of the water masses.

In addition to this annual cycle, another component affects the carbon dioxide emissions below Kariba Dam. Because the demand for electricity is highest in the morning between 6 and 10 a.m. and in the evening between 6 and 8 p.m., the power plant lets more water through the turbines at these times. As the researchers have now shown, carbon dioxide emissions also show these daily fluctuations. "For me, this daily carbo-peaks were the eye opener of this study," says Wehrli.

"Data must be collected on site"

Greenhouse gas emissions downstream of hydropower plants have been neglected so far – and are therefore not yet taken into account in the most current carbon budgets says Calamita. Yet reservoir emissions are estimated to account for about two to three per cent of humanity's total greenhouse gas footprint. "Hydropower is not CO2-neutral per se," says Wehrli. In Switzerland, significant carbon dioxide emissions are associated with the construction of the dams, but these emissions can be discounted over 80 years – and therefore do not play a major role in comparison with coal-fired power plants. "But individual tropical power plants, such as the Belomonte Dam in the Amazon, are real CO2 spewers," says Wehrli.

This does not apply to the Kariba power plant, where it is not the carbon dioxide but rather the methane emissions that are important. Nevertheless, their measurements showed that findings obtained in the global North cannot simply be extrapolated to tropical water reservoirs, says Calamita. The studies also showed that temporal fluctuations can lead to major errors in the estimation of carbon dioxide emissions. Therefore, observations over longer periods of time are needed. And: "The data must be collected locally," says Calamita. "International efforts are needed to continue to make this possible."

Recent studies show that tropical hydroelectric reservoirs may be responsible for substantial greenhouse gas emissions to the atmosphere, yet emissions from the surface of released water downstream of the dam are poorly characterized if not neglected entirely from most assessments. We found that carbon dioxide (CO2) emission downstream of Kariba Dam (southern Africa) varied widely over different timescales and that accounting for downstream emissions and their fluctuations is critically important to the reservoir carbon budget. Seasonal variation was driven by reservoir stratification and the accumulation of CO2 in hypolimnetic waters, while subdaily variation was driven by hydropeaking events caused by dam operation in response to daily electricity demand. This "carbopeaking" resulted in hourly variations of CO2 emission up to 200% during stratification. Failing to account for seasonal or subdaily variations in downstream carbon emissions could lead to errors of up to 90% when estimating the reservoir’s annual emissions. These results demonstrate the critical need to include both limnological seasonality and dam operation at subdaily time steps in the assessment of carbon budgeting of reservoirs and carbon cycling along the aquatic continuum.
See DOI
See Institutional Repository
Calamita, E.; Siviglia, A.; Gettel, G. M.; Franca, M.J.; Winton, R. S.; Teodoru, C. R.; Schmid, M.; Wehrli, B. (2021) Unaccounted CO2 leaks downstream of a large tropical hydroelectric reservoir, Proceedings of the National Academy of Sciences of the United States of America PNAS, 118(25), e2026004118 (8 pp.), doi:10.1073/pnas.2026004118, Institutional Repository
Created by Ori Schipper
Share with others: