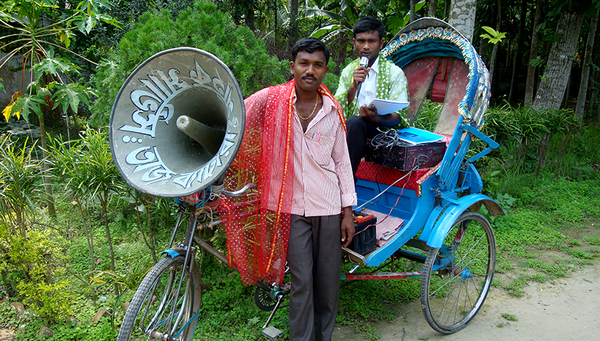 Changing people’s behaviour is no easy matter. Having developed a method that has been shown to promote behaviour change, Hans-Joachim Mosler of Eawag’s Environmental Social Sciences department has now set up a consulting firm – attracting considerable interest among development cooperation professionals in particular. By Mirella Wepf

Helvetas, the SDC, GIZ, the Red Cross, Oxfam, Unicef – the list of partners involved in Hans‑Joachim Mosler’s research projects reads like a Who’s Who of international development cooperation. Mosler, an adjunct professor of social and environmental psychology, joined Eawag in 2002 and now leads the Environmental and Health Psychology group in the Environmental Social Sciences department. His Ranas behaviour change model, developed over the past 15 years, has been scientifically evaluated in more than 30 large-scale research projects.

Currently, for example, as part of a project sponsored by the Bill & Melinda Gates Foundation, he and a 30-strong team are investigating how the construction and sustained use of toilets can best be promoted among communities in the Northern Region of Ghana. To date, open defecation has been widely practised in this area, exposing children in particular to serious health risks (infection with various pathogens). In the project, over 3,200 households were assigned to four groups, receiving different types of behaviour change interventions. A household survey is now being conducted to determine which set of measures was most effective in improving sanitary conditions.

Mosler says: “The project in Ghana is a good example of our evidence-based approach, relying on sound scientific methods.” Unfortunately, he adds, this cannot be taken for granted in development projects. Over the last ten years, he and his group have successfully applied insights from environmental and health psychology in development cooperation projects – for example, to promote handwashing in schools, to increase the consumption of fluoride-free water, or to improve waste management in refugee camps. Mosler comments: “I think it’s fair to say that we have a unique understanding of behavioural determinants. Promoting behaviour change is our forte!”

Among the numerous factors which determine human behaviour are social pressures, feelings, self-efficacy and concerns about high costs. In Mosler’s model of behaviour change (Ranas, Fig. 2), the various factors are classified under the following headings:

Mosler explains: “We’ve developed a set of 36 techniques which can have a positive influence on these factors and thus facilitate behaviour change.” These include public commitments (Fig. 3) – for example, each household that intends to construct a toilet can display a flag on its roof. Barrier planning focuses on individuals’ plans to overcome barriers which would impede the practice of a behaviour. Behaviour change can also be supported by the installation of memory aids, such as a schedule for refilling fluoride filters.

In 2016, Mosler produced a practical guide entitled “Systematic behavior change in water, sanitation and hygiene”, which can be used independently by development agencies. At around the same time, he set up the “RanasMosler” consultancy (an Eawag spin-off), through which he intends to offer advice and training on implementation of the Ranas model. The contracts governing the precise relationship between Eawag and the new company were recently finalized. These cover, for example, the handling of results from research projects, or the maximum amount of time available for consulting activities alongside Moser’s full-time position at Eawag.

According to Mosler, there were several reasons why he decided to establish a spin-off: firstly, consulting is not one of the core functions of scientific research institutes and, secondly, he is due to retire in October 2019. His new company will provide a useful framework for continuing his activities and passing on his expertise to practitioners worldwide. Last but not least, the Ranas model has attracted considerable interest, and there appears to be a huge market. This is illustrated by one of his latest clients: in collaboration with Mosler, the Swiss National Accident Insurance Fund (Suva) is preparing a campaign designed to encourage occupational groups which spend a lot of time outdoors to protect themselves against excessive exposure to sunlight.

For clients, dealing with a sole proprietor involves certain risks: if the owner becomes unavailable for any reason, their whole project could collapse. Mosler has made plans for this eventuality: “In recent years, I’ve worked with a lot of doctoral students who could step into the breach.” In addition, several members of his research group are planning to follow in his footsteps: “Over the next one to three years, there will probably be another three spin-offs with the same business model.”