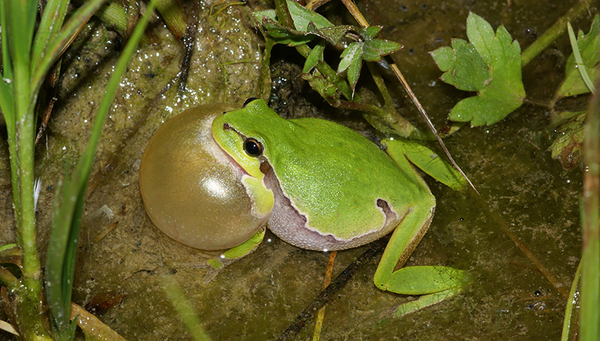 Nature conservation pays off: amphibians benefit from new ponds - despite many causes of endangerment that still affect them. This is what researchers from WSL and Eawag found in a joint study using data from amphibian monitoring in the canton of Aargau. The study was published in the scientific journal PNAS.

A large proportion of Switzerland's frogs, toads, newts and salamanders are on the Red List of endangered species. There are many reasons for amphibian dieback: habitat loss, a deadly fungal disease, pesticide use in agriculture, road traffic and climate change. Some of these threats are difficult to address. But at least against the loss of habitat there is a relatively simple solution: the creation of ponds in which the animals can reproduce. This increases the number of offspring and better connects the populations thanks to the greater density of ponds in the landscape.

The ecologist Helen Moor and a research team from the Swiss Federal Institute for Forest, Snow and Landscape Research WSL and the Swiss Federal Institute of Aquatic Science and Technology Eawag, in collaboration with info fauna karch, have now been able to prove that the large-scale creation of new ponds actually benefits amphibians. The data for the study come from the canton of Aargau. Here, over 400 new ponds were created within twenty years. The amphibians colonised the new water bodies, and the populations of ten of the twelve species increased by 2019. "We were surprised by the clear result," says Moor, "especially in view of the fact that the other threats have not decreased in the meantime. "

Data treasure thanks to monitoring programme

Since 1999, the canton of Aargau has been monitoring its amphibian populations with a monitoring programme along the five major river valleys and thus has one of the best long-term data sets available. The data were largely collected by volunteers and entered by researchers into a complex statistical model. On the one hand, the model compensated for the errors that can occur during observation. On the other hand, the model allowed the researchers to predict how the occupation of the ponds changed over time.

This showed that the larger a newly created pond was, the higher was the chance that it would be colonised. The proximity to the forest and to other ponds were also criteria that promoted colonisation. The yellow-bellied toad increased strongly, especially in the Rhine and Aare valleys. As a pioneer species, it also likes to colonise newly created, open water bodies. The tree frog population in the Reuss Valley even more than doubled in the period studied. Further analyses will show whether the new ponds alone led to this - and where the animals migrated from.

But not quite all species benefited. The natterjack toad prefers very large, temporarily flooded areas in open country with fluctuating water levels. "This species has specific habitat requirements that must be taken into account when building ponds," says Moor. This has apparently not yet been done enough in the canton of Aargau.

For Moor, however, it is clear: "Even though the negative reports on the loss of biodiversity can be overwhelming: Our study shows that it is worthwhile to implement conservation measures and that populations can recover." Her advice to practitioners: "Sooner or later, every newly created pond is valuable for amphibians."

The success story from the canton of Aargau also benefited from the fact that there was the political will to act and that all actors were pulling in the same direction: the canton, the nature conservation organisations and the landowners. Thanks to the carefully implemented monitoring programme, the measures can now be evaluated and adapted, for example in favour of the natterjack toad.

The study was carried out in collaboration with info fauna karch and was published in the scientific journal PNAS (Proceedings of the National Academy of Sciences).

The research project "Blue-green infrastructure for blue-green lives: modelling use and colonization credit of an ecological infrastructure to inform evidence-based amphibian conservation" contributes to the Blue-Green Biodiversity research initiative - an Eawag-WSL collaboration addressing biodiversity at the interface of aquatic and terrestrial ecosystems. The initiative is funded by the ETH Board.