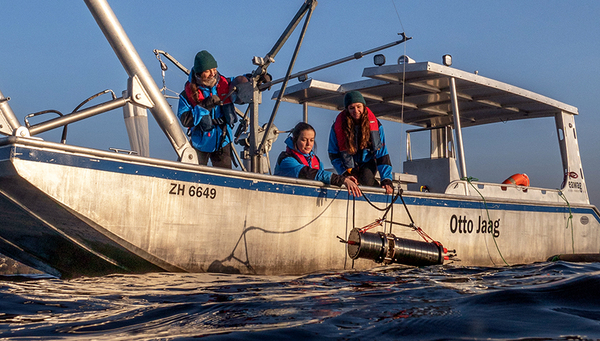 Today is the International Day of Women and Girls in Science. Eawag has long attached great importance to the engagement of women and the promotion of female careers.

With today's International Day of Women and Girls in Science, the UN is working to promote careers of female researchers. The potential is great because women are still under-represented. Why is that? Nele Schuwirth, Head of Department at the aquatic research institute Eawag, sees the reasons for this primarily in the structures. «To be able to retain excellent researchers, we need to recognise that they have additional goals in life besides work, such as starting a family, » says Schuwirth.

«To be able to retain excellent researchers, we need to recognise that they have additional goals in life besides work.»

The reality is that a scientific career – especially at the first stages of a dissertation and post-doc – involves a great deal of effort and commitment. This correlates with the wish of many young couples to work part-time. Eawag therefore helps female researchers in the «Tailwind» programme with the necessary support to return to work on a part-time basis after maternity leave. The programme has become established and is actively used.

With 50 percent of its staff and 46 percent of its scientists being women, Eawag is a women-friendly employer. Women and men are on an equal footing in terms of pay, as regular analyses show, and at 34 percent, the proportion of women in management positions is at a relatively high level. Natalie Lerch-Pieper, Equal Opportunities Officer at Eawag, sees several reasons for the success: On the one hand, Eawag has a slight advantage over other institutions in the ETH Domain because its research priorities tend to focus on subject areas that traditionally attract more women.

«We have succeeded in anchoring the topic of equal opportunities at various levels in the institution.»

«Above all, we have also succeeded in anchoring the topic of equal opportunities at various levels in the institution and creating the necessary structures,» Lerch-Pieper explains. «We sensitise staff and new managers to where gender bias might play a role and how we can counteract it. » It is also a great advantage for Eawag that, with Gabriele Mayer, Tove Larsen and Director Janet Hering, three of the seven members of the Directorate are female, says Lerch-Pieper. Women often cultivate more female networks than men. «The so-called glass ceiling effect is partly due to the fact that women are not promoted because they are not considered in male-dominated networks.»

In order to promote women in a targeted manner, Eawag is also involved in the ETH Domain’s «Fix the Leaky Pipeline» programme. Young female scientists who aspire to a research career receive support in the form of course, mentoring and coaching offers to actively plan their career and expand their network. The CONNECT programme, in which Eawag participates, builds bridges to industry, the private sector and public-sector institutions in order to open up this career path – with a strong emphasis on female scientists.

And women are actually predestined to be bridge builders, says Kathrin Fenner, Group Leader at Eawag and professor at the University of Zurich: «Often, women scientists balance many different demands in their lives,» she says. «I think this gives them the insight and foresight to cultivate good science and scholarship for the benefit of all.»

«Women scientists balance many different demands in their lives. I think this gives them the insight and foresight to cultivate good science and scholarship for the benefit of all.»