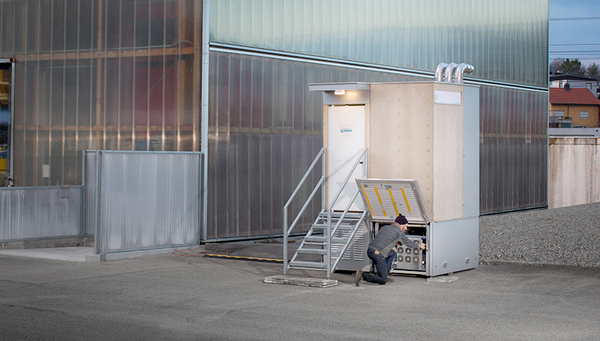 Together with a team of researchers and designers, Kai Udert has designed a toilet system that makes it possible to recycle nutrients from wastewater on-site. As a result, valuable nutrients can be recovered and used as fertilisers so that they no longer end up in lakes and oceans where they do a lot of damage. Now he wants to make the system ready for market together with industry partners.

In professional circles, there is talk of a toilet revolution. What exactly is going on here?

It is not only about the toilet itself, but also highly about the treatment of excreta. Nowadays, they are regarded as resources and not as waste, which also has implications for the actual “user interface”, i.e. the toilet bowl. It must be designed to handle the excretions as efficiently as possible. As such, the toilet is no longer regarded as a water-flushed waste bin but rather a collection point for recyclable materials. During the process, it is useful if waste streams such as urine, faeces, and if necessary, flushing water are collected separately. By doing so, they can subsequently be recycled more efficiently and urine, for instance, can be reused as a fertiliser.

The fact that fields are fertilised with liquid manure and dung is nothing new in and of itself; even human urine was formerly used as a fertiliser. Why is research on the matter still being conducted at Eawag?

This statement shows that a change of opinion is already fully underway. For a long time, the idea of using urine as a fertiliser was not really accepted by professionals and the general population. There are still political decision-makers who are sceptical as well. And, of course, there are important critical points that must be taken into account:  Any health risks caused by pathogens or pharmaceutical ingredients must be prevented when using urine as a fertiliser; the nutrients mainly need to be absorbed by the plants and not get lost in the air or in the groundwater. It is important to remember the odour it produces and to prevent it.

How can using resources from wastewater make a contribution with regards to climate change?

Climate change is just one of the world’s major environmental challenges. The Earth is beyond its load limits as far as the nutrients phosphorus and nitrogen are concerned. On a global scale, they cause the oceans to become overfertilised. In this case, the benefits of recycling resources from wastewater are apparent. By recovering nutrients from excretions and recirculating them in agriculture, we can reduce the production of synthetic fertilisers and thereby reduce the total loss of nutrients into the environment. Furthermore, reducing the consumption of fossil resources, whether it is natural gas for nitrogen fixation or phosphate rocks, has a positive effect on the environment. However, it is also important to avoid using too much energy to recover resources from wastewater.

Wastewater contains many nutrients, but it also contains pollutants and residues from pharmaceuticals. How do you deal with them?

Medications are a very important issue. During the approval process for our “Aurin” fertiliser, the Federal Office for Agriculture required us to remove all medications from the product. We achieve this using activated carbon adsorption, i.e. using a process similar to what is used in wastewater treatment. By doing so, we were able to reduce the concentrations of indicator substances to below the detection limits.

For some time now, you have been conducting research on a self-contained toilet that enables on-site wastewater recycling without any sewage system or major wastewater treatment plants. What have you accomplished and what is the current status  of your progress?

The Blue Diversion Autarky Toilet consists of four modules: one each for urine, faeces and flushing water, and the “user interface”, consisting of a basin, a urinal, and a urine-separating toilet. The entire system was presented in Beijing in 2018 alongside other projects that were developed in the “Reinvent the Toilet” programme. Since them, we have been in touch with several industrial companies. One company is taking care of water treatment, and we are currently in talks with another company on a collaboration on urine treatment.

Even if we have not yet found a company that would like to industrialise the entire system, with our project, we have nevertheless created crucial momentum for developing on-site wastewater treatment plants. Hydrothermal oxidation, which was developed by our partner the University of Applied Sciences and Arts Northwestern Switzerland (FHNW) under the direction of Prof. Frédéric Vogel for treating faeces, is also undergoing further development in another project supported by the Gates Foundation; this project also relates to the separation of wastewater streams in the “user interface". The approach of separating faeces and urine was likewise adopted by other development projects.

What is your vision, and by when could it become a reality?

The four modules are developed in parallel by us, our partners, or the industry. Austrian design firm EOOS NEXT is already working on several types of toilets that can separate urine and faeces. In just a few years, water and urine treatment could be industrialised and sold at a marketable price. When it comes to treating faeces, I hope that we can find a suitable process as part of research in the Water Hub. I believe that in a few years the industrialised modules can then be combined into a functional overall system. However, we need strong and committed industry partners to make this vision a reality.

The theme for this year’s UNESCO World Toilet Day 2021 is “sustainable wastewater disposal and climate change”. For this occasion, we will publish interviews with our researchers Tove Larsen (member of the Directorate, group leader) and Kai Udert (group leader), both of whom have been working on recovering resources from wastewater for several years. In “Flows of Science”, Luke Keogh demonstrated how they have developed waste stream separation together with other researchers from Eawag.

The Blue Diversion Autarky toilet enables the separation and treatment of wastewater in a small space. Click to enlarge (only available in german)