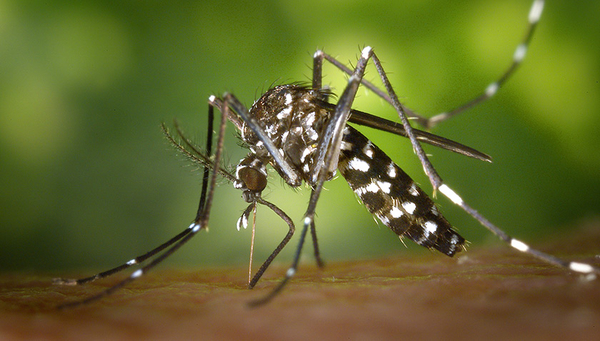 Invasive insect species can cause great economic and ecological damage. For example, the emerald ash borer is destroying ash tree stands over a wide area in North America and has also been spreading in Eastern Europe for several years. The spotted wing drosophila not only causes yields in berry, fruit and grape vines to collapse, it also attacks forest plants, which can result in considerable ecological damage.

A study conducted as part of the Blue-Green-Biodiversity research initiative launched by Eawag and WSL now shows that insects that depend on freshwater for their life cycle are less likely to be invasive than terrestrial insects, i.e. those that live exclusively on land. In the three large regions studied - Europe, North America and New Zealand - the picture was similar everywhere.

When insects travel between continents

It is known from other studies that aquatic animals such as crabs and mussels are also often transported unintentionally, for example with the ballast water in the tank of ships. "The fact that there are so few invasive aquatic insects is astonishing because insects are one of the most common species groups in freshwater," says Eckehard Brockerhoff, head of the study.

Among the reasons for this are probably the habitat requirements of aquatic insects - also during transport to new areas. These insects are often dependent on oxygen-rich water. On long journeys, however, oxygen usually becomes scarce, so the demanding passengers often do not survive transport. In addition, adults are hardly ever transported, as they only have a short life span.

This is different for insects that live on land. They can be moved via a variety of pathways such as in and on plant material, wooden pallets or in containers and thus find numerous means of travelling. Aphids, for example, are often stowaways in the transport of exotic plants. Because they can reproduce without a partner, theoretically even a single aphid is enough to establish a population at a new location.

But there are also exceptions among aquatic insects: "Mosquitoes are not that demanding, they can also cope with oxygen-poor water," says Brockerhoff. Puddles or a container in which rainwater has accumulated are enough for them to reproduce. The larvae are found, for example, in used tyres, which often contain some rainwater and thus provide a habitat for mosquito larvae during transport.

In fact, the study found that there are relatively many invasive species among mosquitoes. "The fact that these are then also invasive on more than one continent indicates that these species have the potential to spread even further," says Brockerhoff. One example is the Asian tiger mosquito, originally from Southeast Asia, which has settled in Europe as well as in North America and other regions of the world.

Knowledge about the characteristics of invasive species and the pathways by which they reach other continents helps in the fight against the spread of invasive animals and plants through international trade. Action is particularly needed for invasive insects that live on land. But aquatic insects are also likely to spread further into new areas in the future if appropriate measures are not taken in time.

The research project "Biological invasions in blue versus green ecosystems" contributes to the Blue-Green Biodiversity research initiative - an Eawag-WSL collaboration focusing on Biodiversity at the interface of aquatic and terrestrial ecosystems. The initiative is funded by the ETH Board.

Cover picture: The Asian tiger mosquito (Aedes albopictus) is one of the few aquatic insect species that has been introduced and is invasive on several continents. Photo: James Gathany, CDC

Created by Majken Grimm / Lisa Bose (WSL)
Share with others: