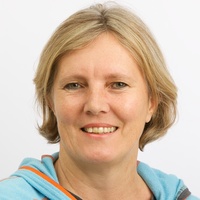 “GIS is an integrative computer system to analyze and visualize spatial data. It helps to communicate between different research fields".

Since 2002 I am working at EAWAG as a GIS specialist, combing my expertise in biology and environmental sciences with GIS and data management.

My main task is supporting all research groups at EAWAG in questions concerning GIS:

Involved in different projects in ecology, hydrology and environmental engineering, my focus is on the watershed and landscape analysis in alpine and European regions, where I investigated watershed properties with GIS and statistical methods.

Lack of sufficiently detailed data often limits the applicability of complex transport-reaction models for estimating potential herbicide loss to surface waters. Therefore, there is also a need for simple models that are easy to apply but still capture the main features of the underlying processes.
In this study, a simple regression model was developed to assess the vulnerability of catchments in the Swiss Plateau to diffuse herbicide loss to surface waters. The model is designed as a screening tool to rank the catchments in a relative sense and not to calculate Predicted Environmental Concentrations (PEC) of pesticides. The main goal is to capture two dominating factors controlling diffuse herbicide transport into streams and rivers. These factors are herbicide application and fast flow processes that are mainly responsible for herbicide transport. In a first step vulnerability of sites to herbicide loss is estimated based on site-specific conditions irrespective of actual herbicide application. In the second step, this vulnerability assessment is combined with actual herbicide application data to estimate the potential herbicide loss.
The fast flow index (FFI), derived from discharge data using a base flow separation method, was applied as a proxy for the amount of fast flow occurring. The influence of catchment attributes (including topographic, climatic and soil data) on the FFI was analyzed using a multiple regression approach based on data from 57 catchments of the Swiss Plateau. By combining regression analysis with mechanistic knowledge, a two factor non-linear model based on river density and soil permeability as dominant input factors was selected as the best model for FFI prediction given the available data. Higher dimensional models had to be excluded because the strong correlation between the potential input factors led to unrealistic dependences while only minimally improving the quality of the fit.
The spatial pattern of the predicted FFI as a measure for the vulnerability to diffuse herbicide losses shows a clearly increasing trend from the western to the eastern part of the Swiss Plateau and towards the pre-alpine/alpine regions in the south.
In general the pattern of herbicide use corresponds to site conditions typical of a low FFI. However, the spatial analysis revealed exceptions, namely areas in which high actual herbicide use coincides with a high FFI.
Despite the uncertainties in the model, this simple approach seems to be useful for supporting site-adapted agricultural practice whenever the higher accuracy of more detailed models is not required or too expensive to achieve. In addition, in combination with data on actual herbicide application, it can support the design of monitoring strategies by identifying critical areas of actual herbicide loss.
See DOI
See Institutional Repository
Siber, R.; Stamm, C.; Reichert, P. (2009) Modeling potential herbicide loss to surface waters on the Swiss plateau, Journal of Environmental Management, 91(1), 290-302, doi:10.1016/j.jenvman.2009.08.019, Institutional Repository
Tockner, K.; Uehlinger, U.; Robinson, C. T.; Siber, R.; Tonolla, D.; Peter, F. D. (2009) European Rivers, In: Likens, G. E. (Eds.), Encyclopedia of Inland Waters, 366-377, doi:10.1016/B978-012370626-3.00044-2, Institutional Repository