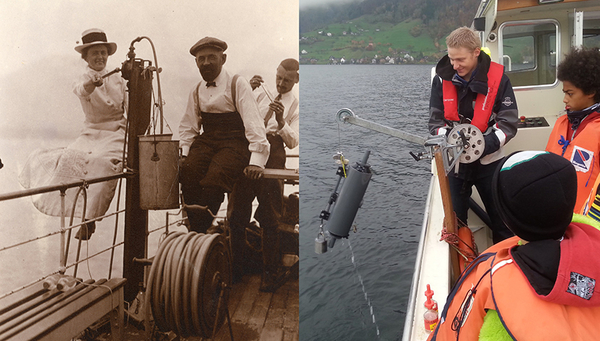 A small exhibition in the Lucerne Nature Museum has been curated to commemorate the founding of the Hydrobiological Laboratory in Kastanienbaum 100 years ago in 1916. Visitors will also be able to view the exhibition “A Chance for the Otter”, which will be showing throughout the same period in the Forum Treppenhaus, as well as having the opportunity to learn about the early years of the Institute and some of its more recent projects, and take a look at some of the original equipment used.

Large-format photographs of algae demonstrate the otherwise generally hidden beauties of the lake. Lake Lucerne has been the subject of research since 1916, and this work was expanded to include lakes and rivers all over the world shortly afterwards. In the place where the Lucerne Association of Natural Sciences and volunteer researchers – with close ties to the Nature Museum – originally set up the laboratory, Eawag now runs a modern research outfit, the “Centre for Ecology, Evolution and Biogeochemistry” with around 100 employees.

Other events to celebrate the 100-year anniversary

Thursday, 9 March 2017, 6pm: Visit to the Eawag aquatic research institute in Kastanienbaum: inside view of the history of the laboratory and some of its current research projects. Duration c. 2 hrs. Sign up by Monday, 6 March 2017 at naturmuseum@clutterlu.ch or call 041 228 54 11.