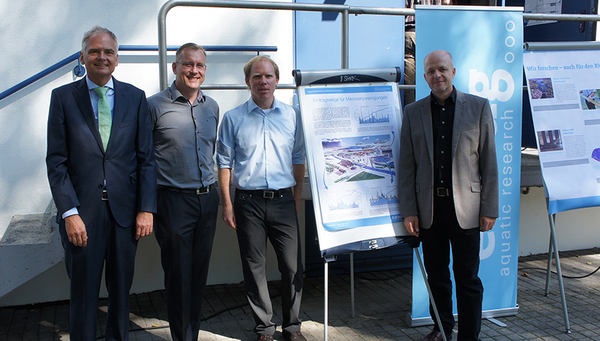 Today, Monday 8 September, the Canton of Basel-Stadt, the German Federal State of Baden-Württemberg, the Swiss Federal Office of the Environment and Eawag are somewhat belatedly celebrating the anniversary of the International Rhine Monitoring Station (RMS) in Weil am Rhein.

The facility was opened on 24 September 1993 as a result of the Sandoz fire disaster in 1986 and the consequences associated with it (see image). Since that time, the RMS has been funded equally by the Federal State of Baden-Württemberg (Ministry of the Environment, Climate Protection and the Energy Sector / Institute for the Environment, Measurements and Nature Conservation of the State of Baden-Württemberg LUBW) and the Swiss Federal Government (Federal Office for the Environment FOEN). The Regional Council of Freiburg is responsible for maintaining the station, while the Basel-Stadt Cantonal Office for the Environment and Energy (AUE) is in charge of measurement operations. Over the past few years, Eawag has provided support in the form of scientific and technical expertise for the analytical reorientation of the station.

The facility was opened on 24 September 1993 as a result of the Sandoz fire disaster in 1986 and the consequences associated with it (see image).