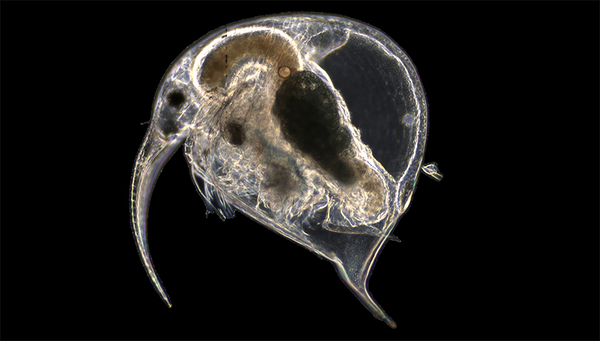 Since spring 2018, the newly developed underwater camera Aquascope has been recording a wide variety of plankton species in Lake Greifen. These sensitive organisms can thus, for the first time, be observed undisturbed in their natural habitat – an important step towards automated monitoring of water quality and aquatic biodiversity.

The live images from the Aquascope reveal an amazing underwater world. Lake Greifen is home to a smorgasbord of wonderful creatures – star-shaped, cylindrical, horned or extravagantly coiffed. But as well as stimulating the imagination, the phyto- and zooplankton floating in water serves as an indicator of the ecological status of surface waters. Plankton observation is therefore of crucial importance in the monitoring of surface water quality. Here, the Aquascope can make a significant contribution. It is based on the Scripps Plankton Camera (SPC, developed by the Jaffe Laboratory for Underwater Imaging at the University of California, San Diego), consisting of a powerful LED light source and a dual-magnification underwater imaging microscope. Water, together with drifting plankton, flows freely through the space between the light source and the lenses, so that the life-forms can be observed undisturbed in their natural environment. This is a major advantage, as the sensitive organisms no longer need to be captured and removed from their habitat, with the natural aggregation of species being disrupted as a result.

The SPC, originally developed for marine ecosystems, was adapted for use in lakes by biologist Francesco Pomati and colleagues from the Aquatic Ecology department: “We modified the configuration of the instrument, incorporating two lenses of different magnifications and shortening the distance between light source and camera. This was to ensure that, even in turbid lake water, sufficient light reaches the objective lenses to produce sharp images.” As only scattered light from the objects detected is imaged, the microorganisms appear bright against a dark background.

Since April 2018, the Aquascope has been deployed for a trial period at the research platform on Lake Greifen. All year round, it produces one image per second for ten minutes of every hour. A computer embedded in the Aquascope transmits high-resolution images in real time to Eawag. Here, Pomati’s group can analyse the images on a screen just a few minutes later.

Pomati is already looking to the future: “If the trial is successful, the Aquascope can replace the conventional method, whereby samples have to be manually collected and then sorted, identified and counted under the microscope in the lab.” The researchers will thus gain new insights into the underwater world: “We can observe biodiversity and plankton community dynamics directly in the lake, with an automated, real-time procedure providing much more information.” But surface water monitoring should also be simplified, as the Aquascope permits daily forecasting of biological water quality and toxic algal blooms.

The huge volume of data, however, also creates new challenges for researchers. Pomati explains: “If we classify the plankton images by eye, we can only analyse a proportion of them.” For this reason, he recently started a machine learning project, involving the physicists Thomas Lorimer, Carlo Albert and Marco Baity Jesi of the Systems Analysis, Integrated Assessment and Modelling department. The aim is to make automated classification possible in the future. For this purpose, algorithms are being developed and trained on imaging data to identify species and interesting properties of plankton. But, as Pomati notes, “Rare plankton species, in particular, are not easy to cover, as here we only have a few images.”

This article was first published in the annual report 2019.