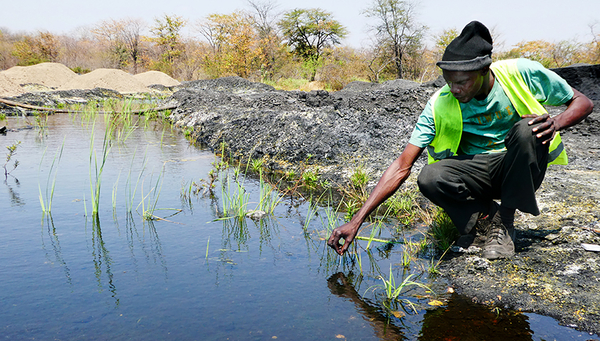 Mining can have serious consequences for nature and the health of the population in countries of the Global South, where environmental laws are often only inconsistently implemented. In Hwange, in western Zimbabwe, people have been fighting water pollution from coal mining for years. But they were powerless against the operators – until doctoral student Désirée Ruppen launched a citizen science project in 2018.

There is too much nickel, too much arsenic and far too much manganese. The research project by Désirée Ruppen, who is doing her doctorate at the aquatic research institute Eawag and the ETH Zurich, provides watertight proof for the first time of what everyone on the ground already knew. The Deka River in the Hwange district is heavily polluted by coal mining and the coal-fired power plant, and is a serious health risk for the people who drink its water or fish in it. It is an important result for the local communities. Not only because community members now have scientific data at hand for the first time in their fight against the companies responsible, but above all because they themselves have contributed significantly to compiling this data. “I had wanted to do a citizen science project for a long time to document water pollution in a mining area,” says Désirée Ruppen. “In Hwange, I came across a very committed community that made this project possible.” 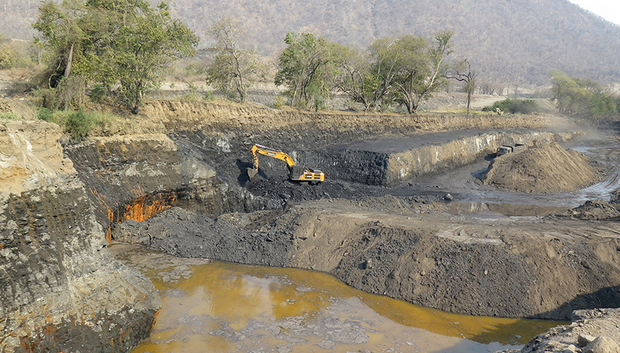 In the Hwange district, coal is extracted in open-pit mines. (Photo: Désirée Ruppen) 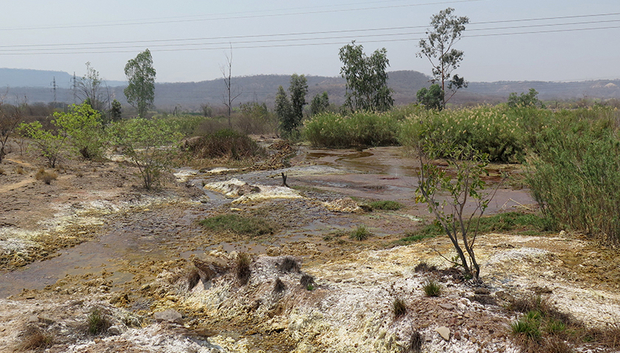 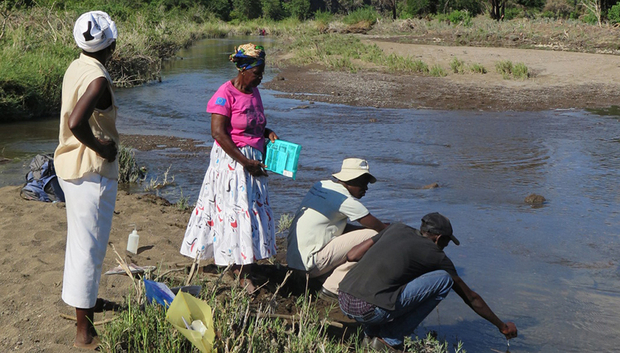 After their training, the 13 citizen scientists take the first water samples from the Deka River. (Photo: Désirée Ruppen) 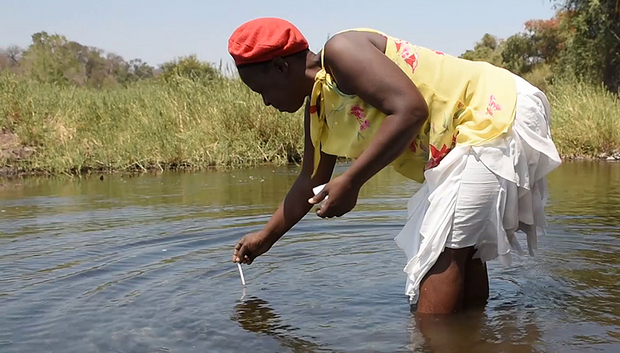 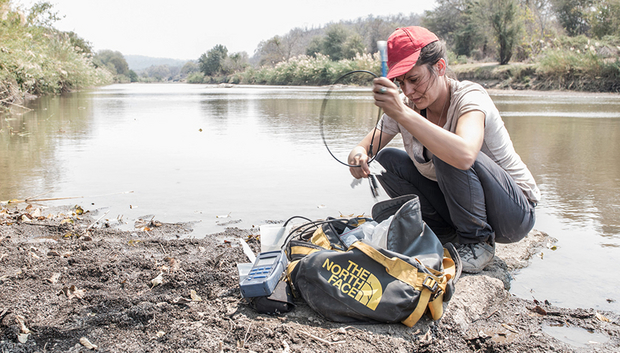 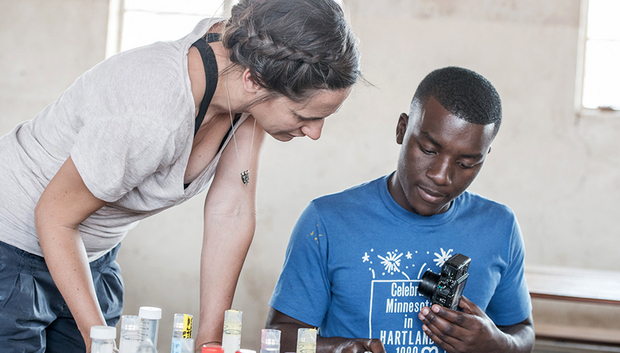 13 women and men from different villages – the youngest 16 and the oldest almost 70, the vast majority with only primary school education – participated in the study. After a training session in which Ruppen explained to the laypeople how to proceed with water sampling, they set to work. They filled water into plastic tubes and measured its pH value every one to two weeks at eight different locations along the Deka River and a tributary that transports wastewater from the mines and the coal-fired power plant. 420 samples were collected between December 2018 and March 2020. “The community-based, participatory approach has many advantages from a research perspective, particularly in the area of environmental monitoring,” says Ruppen. Normally, as Swiss researchers in Africa, they travelled to the field for a few weeks for a measurement campaign, worked intensively on collecting data and repeated the whole process a few months later. “This means we only have a very limited time frame for analysis. Local residents, on the other hand, can take samples regularly over longer periods of time and respond to unusual events. In our case, this allowed us to map the entire hydrological year with rainy and dry seasons and all its fluctuations.”

The data was supplemented by around 350 additional samples taken by Ruppen and a young scientist from the University of Zimbabwe at other locations, as well as by the records from the measuring probes installed in the river. However, measured values only become meaningful when they are correctly interpreted. “To do this, you need background information on the circumstances at each site. That’s why the notes that the 13 citizen scientists took in connection with their measurements were particularly valuable,” says Ruppen. They kept records of the weather conditions and the colour of the water, documented their observations of the state of the ecosystem, such as the presence of fish and insects, and also noted when one of the companies had once again pumped water out of the coal mines. “This allowed us to not only determine the quality of the water, but also to explain why there was an increased level of pollution and fish dying at a particular time and who was responsible.”

Travelling with bags of sample tubes

Ruppen analysed the water samples at the aquatic research institute Eawag because she could not find a laboratory in Zimbabwe with the required quality standards. The researcher travelled back to Hwange again in February 2019 to collect the samples from the first few months. “I was pretty nervous. Did the people take any samples at all, and if so, had they done them correctly? Did everybody stay committed? The motivation of the participants is crucial in such citizen science projects. That’s what I was most afraid of at the beginning.” These concerns were unfounded, as it turned out. “People welcomed me with bags of samples and had lots of things to talk about. I was enormously relieved.” The cooperation with the community worked rather well despite the distance and technical hurdles – not everyone had a working phone to keep Ruppen up to date. A much bigger challenge was the logistics. “The plastic tubes for the water samples are hard to get in Zimbabwe and are ten times more expensive than here. So I ordered some in South Africa, but they were stolen during transit. In the end, I brought bags of sample tubes from Switzerland.”

The study has been finished in the meantime. It has not only provided important figures and answers, but has left a lasting mark on the local people. “I find it fascinating how people have adopted the vocabulary, how they discuss pH levels with government officials, for example. They can have their say now and are taken more seriously than before,” says Ruppen. “A young woman told me that since she joined the project, she has been invited to village elders’ meetings because she has something to say about the water.” This is also the strength of citizen science projects; they empower the local population, strengthen their position with regard to the economy and the state, and thus offset imbalances of power.

Some of the citizen scientists would like to have continued the project, to continue collecting samples to create even more evidence, says Ruppen. “But that will not change the result. There is now enough well-founded, valid data that clearly shows the extent of the pollution and no longer allows for excuses. Now, finally, the government and the companies must take systematic measures.” A next step in this direction is already becoming apparent. The civil society organisation that has been accompanying the local population in Hwange for a long time in their fight against water pollution wants to file a lawsuit against the companies responsible. The data from Ruppen’s study is a key pillar of their argument.

Cover picture: One of the 13 citizen scientists measures the pH value in a mine effluent channel. (Photo: Fritz Brugger)

Although mining and mineral processing are vital for many economies in the Global South, they are associated with enormous challenges of managing potentially devastating environmental impacts. In contexts where environmental oversight agencies often lack financial and personal capacities to fulfill their role, community-based monitoring might be a valid alternative to monitor potential environmental impacts. In this study, we present the setup and the implementation of a citizen science project to monitor water quality parameters in a river downstream of a coal mining area in Hwange, Western Zimbabwe. In a joint effort over 1.5 years, community monitors and scientists took close to 800 water samples in the Deka River and effluent channels. The data allowed identifying sources of pollution and relating these to past and present mining activities. The primary source of acid mine drainage came from abandoned underground mine sites. Illegal mine water dumping from active mine sites accentuated the problem and resulted in fish kills and food risks for the local population. Concentrations of manganese, nickel and arsenic were exceeding national fresh water guidelines and international drinking water standards. Manganese concentrations exceeded guidelines by a factor of 70 resulting in a public health risk. In this study, we showed that community-based monitoring offers a promising approach to establish a high-quality dataset for assessing mining-related risks if the implementation of sampling protocols is followed tightly. The monitoring scheme significantly improves the collection and interpretation of water quality data in challenging contexts where governmental institutions and industrial players are not enforcing environmental standards.
See DOI
See Institutional Repository
Ruppen, D.; Chituri, O. A.; Meck, M. L.; Pfenninger, N.; Wehrli, B. (2021) Community-based monitoring detects sources and risks of mining-related water pollution in Zimbabwe, Frontiers in Environmental Science, 9, 754540 (16 pp.), doi:10.3389/fenvs.2021.754540, Institutional Repository