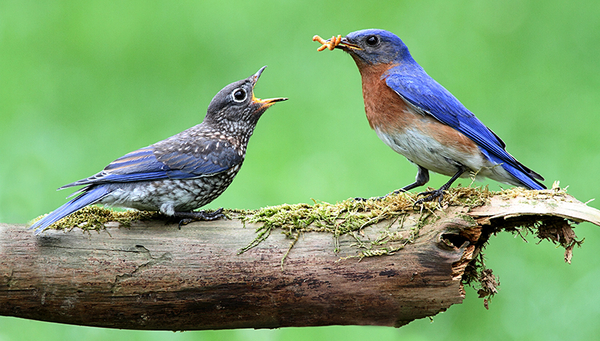 The buffet of healthy insects starts earlier, is no longer as varied, and is only half as plentiful as it once was. This is the situation faced by insectivorous birds at Northern Temperate latitudes, such as Switzerland, during the breeding season. Ryan Shipley from the Eawag water research institute, has been investigating how climate change affects the timing and quality of the food supply for breeding birds.

It takes two to three weeks for the young of songbirds such as House Wrens and Barn Swallows to grow big and strong enough to leave the nest. These crucial weeks determine whether the parent birds are able to pass on their genes. In order for reproduction to be successful, they must procure as much high-quality food as possible for their offspring during this window of time. The menu mainly includes insects, not only land insects, such as beetles, bees and the like, but also aquatic insects, such as caddisflies or mosquitoes. But can the supply and quality of these food sources still meet the demand in view of the decline in insects? Are there still enough – and enough of the most nutritious – insects during the birds’ breeding seasons?

This question was posed by ornithologist Ryan Shipley as part of the Blue-Green-Biodiversity research initiative launched by Eawag and WSL. In his study, he analysed shifts in insect abundance and the timing of the breeding season of various migratory songbird bird species in relation to climate change over the past 25 years in the northeastern United States .

The reason he chose this region is simple: there is an abundance of long-term data and observations. At Cornell University in Ithaca, New York State, insects were counted, measured and categorised daily from 1989 to 2014. “This dataset is unique”, Shipley says. “We’re seeing not only how the total number of insects has altered over the 25-year period, but also changes in terms of body size, species diversity and the temporal occurrence of certain species.” Long-standing observational records were also available for the breeding habits and breeding success of birds in the region. Shipley chose seven small bird species for his study that breed at different times and feed insects to their growing chicks.

Climate data for the study region showed increasing temperatures in early spring, as can also be observed here in Europe. As one might expect, insect development shifted forward in accordance with the advancing vegetation period. On average, aquatic insects emerged about a week, and terrestrial insects nearly two weeks earlier in spring than in the 1990s. “For aquatic insects, the data also show that their numbers peak earlier, with a steeper increase in April and a sharp drop-off in May. So, the period with an abundant supply of aquatic insects has shortened and shifted to earlier in the breeding season.” In the second half of the breeding season, terrestrial insects dominate; their numbers increase steadily through to mid-July, albeit to a lesser extent than in the past. Hence, while early breeders find mostly aquatic insects, bird species that only start breeding in mid-May have almost only terrestrial insects to choose from. And that is a problem for them, because not all food is the same.

The superfood for birds

Aquatic insects are higher quality than terrestrial insects. They are the superfood for many birds, so to speak, as their concentration of omega-3 fatty acids is much higher than that of terrestrial insects. “Chicks that get more of these valuable fats are more likely to grow faster and can leave the nest sooner - which is a survival benefit, because chicks in the nest are always at risk of being eaten by a marten or another predator”, Shipley explains. So, as they find more aquatic insects during the breeding season than they used to, early breeders like the Eastern Bluebird (Sialia sialis) may profit from the new circumstances. Their population has increased in the study area since 1966. In contrast, the number of later-breeding tree swallows, which are increasingly left with terrestrial insects, has declined sharply.

One might expect the birds to adapt to the new insect schedule and start breeding earlier. “This is actually happening. But not at the same pace as insect abundance has advanced”, Shipley notes. The breeding season of the bird species in question shifted forward by only three to seven days over the 25-year period. “Many factors, including day length, temperature or migration patterns, are critical to the onset of breeding”, the ornithologist says. “We need to better understand how different bird species can adapt, or not, to changing climate and food conditions.”

Quality and timing are more important than total mass

What surprised Shipley was that, unlike many other regions of the USA and Europe, the study region showed no loss of total mass of insects from 1989 to 2014. “One reason could be that land use change in this area through human activity is comparatively low, so habitats are still relatively intact.” The fact that for some bird species things have worsened despite stable insect biomass shows how crucial the timing and especially the quality of food supply are during the breeding season, Shipley said. “In other regions that are severely affected by insect mortality, a shift and change in food supply would put birds under disproportionately greater pressure.”

It is quite possible that insect development and bird breeding season have shifted and decoupled in central Europe as well. To what extent, however, is unclear, because the results cannot yet be applied to other regions, which is why Shipley will next conduct a larger-scale study with data from Europe, Japan and Russia. One thing the Eawag researcher’s current work clearly shows, though, is how important aquatic life is to life on land. “Aquatic and terrestrial ecosystems are coupled and jointly influenced by climate change. If we want to understand how and why food webs and biodiversity are changing, we need to look at both systems in an integrated way.”