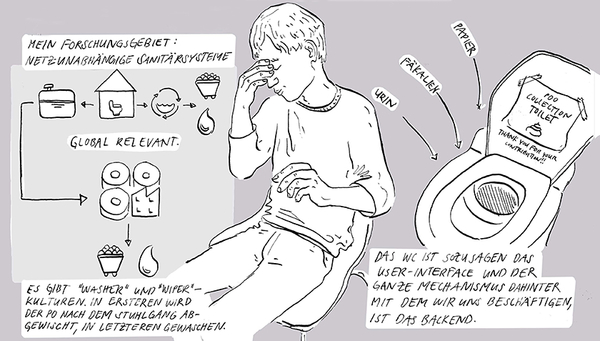 Eawag’s research is usually reported on in scientific papers and media articles. Rather unusual, however, is the form of a comic. Illustrator Celine Künzle took a close-up look at Eawag’s research with faeces and recorded her impressions in the recently-published comic report.

The comic reportage “Researching with faeces” is one of a total of four contributions by Celine Künzle for the current issue of the comic magazine Strapazin. In all the articles, she portrays persons who are professionally involved with waste in some way. “I wanted to present sectors that you don’t immediately think of when you hear the word waste,” says Celine Künzle. And above all, she did not want to point the finger of blame at the problematic side of waste, but rather wanted to report on how much positive work is already being done in this area.

That’s how she came across the research field of Michael Vogel from Eawag’s Department of Sanitation, Water and Solid Waste for Development. He is investigating how fuels can be generated from faeces. Celine Künzle went to see how he does it and had it explained to her so that she could then draw it. What she remembers from her visit is “the enthusiasm Michael Vogel radiates for his profession.” Michael Vogel, on the other hand, is impressed by how well she has rendered them in the comic. “It is exciting to see how the research of my colleagues and me from the research group Management of Excreta, Wastewater and Sludge is perceived from the outside perspective,” Michael Vogel finds. Working with faeces is something quite normal for all of them, while outsiders find it rather peculiar, if only because of the smell. This is precisely where Celine Künzle sees the advantage of a comic strip: “I can show things in a drawing that might be disgusting in a photo.”

Reportage: Celine Künzle. The extended reportage "Discarded, burned, buried" (in German) was published in the comic magazine Strapazin No. 147.