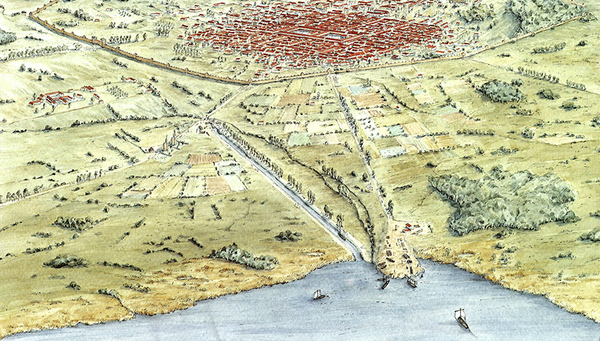 When a population grows quickly and farms intensively, the environment often suffers. This is not only true today, but was also the case as early as Roman times. Evidence of this has been found by Eawag researchers in sediments in Lake Murten.

“We are polluting the rivers and the natural elements, and even ruining the very thing that is essential to life — the air.” These words were not spoken by nature conservationists in the 21st century but flowed from the pen of the Roman scholar Pliny the Elder. In fact ancient history researchers agree today that even in Roman times the environment was being polluted – by unfiltered wastewater, the mining of metals such as iron or lead and clear-cutting of the forests. Lake Murten did not escape these depredations, as a new Eawag investigation has shown.

For the study, the research team led by paleolimnologist Mischa Haas took a ten-meter long sediment core from the deepest part of Lake Murten, which enabled them to create a reconstruction of environmental conditions that spanned several centuries.

The results of the sediment-core analysis surprised the researchers: “We had not expected that signs of the Romans would be so evident in the lake sediment,” comments Mischa Haas. He is referring to the varves, clearly recognizable in the sediment core and stemming from the period in which the Romans flourished on Lake Murten. Varves are alternating dark and light sediment layers that arise when neither oxygen nor living things are found on the lake bottom.

The results can be traced back to the explosive population growth during Roman times, which led to clear-cutting of numerous forests by the Lake Murten population in order to acquire wood for burning and building and to establish fields for agriculture. The ensuing erosion of the earth washed many nutrients like phosphorous, nitrogen and iron into Lake Murten, which became eutrophied – resulting in oxygen deprivation for many fish and other organisms.

This part of the sediment core shows the section with the Roman varves. Each pair of dark and light layers represents one year. (Photo: Eawag)

The lake needs more than 300 years to recover

The researchers were not only able to prove the drastic impingement by the Romans on the ecosystem: “It is also interesting that we can see in the sediments exactly when the Roman empire began to fall apart and how the lake reacted to such social revolution,” says Mischa Haas. The lake sediments show that from about the 2nd century A.D. more oxygen was present in the lake depths. However, it took a good 300 years for the ecosystem to recover,” the researcher points out.

This finding also has relevance to us today also plays an important role at present, as the recovery rate of lake systems is still largely unknown – in spite of numerous renaturalisation projects and new environmental legislation. “Our study shows that human interference in an ecosystem has an effect that can last for hundreds of years,” says Mischa Haas.

The study was part of the PALEOFARM PROJECT financed by the Swiss National Science Foundation. Based on evidence from lakes in Switzerland, Russia and Greenland, researchers are attempting to reconstruct the influence of agriculture on land and lake systems during the last 10,000 years.

Land cover transformations have accompanied the rise and fall of civilizations for thousands of years, exerting strong influence on the surrounding environment. Soil erosion and the associated outwash of nutrients are a main cause of eutrophication of aquatic ecosystems. Despite the great challenges of water protection in the face of climate change, large uncertainties remain concerning the timescales for recovery of aquatic ecosystems impacted by hypoxia. This study seeks to address this issue by investigating the sedimentary record of Lake Murten (Switzerland), which witnessed several phases of intensive human land-use over the past 2000 years.
Application of geophysical and geochemical methods to a 10 m-long sediment core revealed that soil erosion increased drastically with the rise of the Roman City of Aventicum (30 CE). During this period, the radiocarbon age of the bulk sedimentary organic carbon (OC) increasingly deviated from the modeled deposition age, indicating rapid flushing of old soil OC from the surrounding catchment driven by intensive land-use. Enhanced nutrient delivery resulted in an episode of cultural eutrophication, as shown by the deposition of varved sediments. Human activity drastically decreased towards the end of the Roman period (3rd century CE), resulting in land abandonment and renaturation. Recovery of the lake ecosystem from bottom-water hypoxia after the peak in human activity took around 50 years, while approximately 300 years passed until sediment accumulation reached steady state conditions on the surrounding landscape. These findings suggest that the legacy of anthropogenic perturbation to watersheds may persist for centuries.
See DOI
See Institutional Repository
Haas, M.; Baumann, F.; Castella, D.; Haghipour, N.; Reusch, A.; Strasser, M.; Eglinton, T. I.; Dubois, N. (2019) Roman-driven cultural eutrophication of Lake Murten, Switzerland, Earth and Planetary Sciences Letters, 505, 110-117, doi:10.1016/j.epsl.2018.10.027, Institutional Repository
Created by Stephanie Schnydrig
Share with others:
Download article as PDF