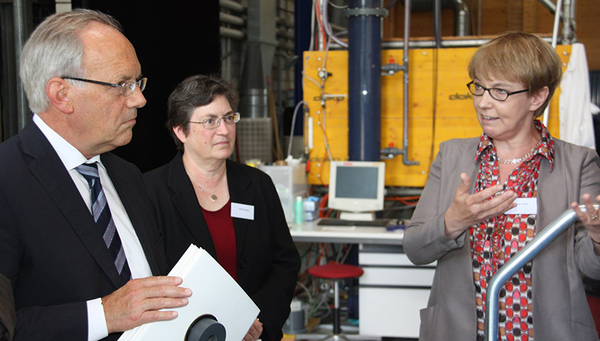 Thursday 28 August, 2014 saw a visit to Eawag by Education Minister Schneider-Ammann. He congratulated Director Janet Hering on having been elected for a third term in office, and spoke in glowing terms of the Swiss Federal Institute of Aquatic Science and Technology, hailing it as one of the flagships of Switzerland’s altogether exemplary education and research landscape.

He said that there was also very strong support for Eawag in parliament. The distinguished guest moreover praised the Institute’s consistent support of women and families as well as its ethos of sustainability. With regard to Switzerland’s access to European research programmes, he implied that a “reasonable” solution was in the offing.
On a short tour, Schneider-Ammann visited the testing hall with the Blue Diversion Toilet, projects concerning leached substances from materials (measured by flow cytometry), and an experiment assembly for examining the immune system of water snails. He followed the demonstrations of the researchers with interest, asking about the processes and results, as well as the practical application of the findings. As a conclusion to his visit, the minister was provided with an insight into the project to revitalise the Chriesbach, which also gave him an indication of the environmental sustainability of the campus as a whole.

Here are a few photos from the day