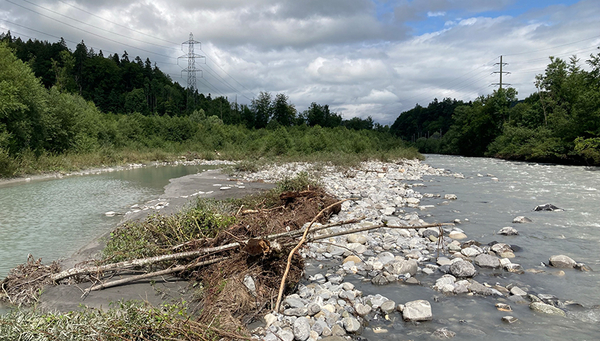 A flood causes stress for organisms living in a watercourse. Their survival depends on factors such as whether there are refuge habitats to which they can retreat. Researchers at VAW and Eawag studied how river widening as part of restoration measures improves potential refugia availability. They showed that refugia provision and thereby the protection of biodiversity depends crucially on the supply of bedload.

Floods such as those that made headlines again this summer are not only drastic for people living along the affected rivers but also for aquatic organisms. They can be displaced, injured, or even killed by the flood - unless they find shelter in refugia. Refugia are sheltered habitats where the flood intensity is lower, such as in zones of low current or on a temporarily inundated floodplain. As a result, refugia play an important role in the conservation of biodiversity in water bodies. Natural watercourses offer a high diversity of habitats and refugia. However, many rivers in Switzerland have been channelized and straightened, greatly reducing the availability of habitats and refugia. In recent years, significant efforts have been made to restore watercourses to a more near-natural state. By providing more space for rivers, both flood protection and biodiversity conservation should be improved.

New habitats – but can they be used?

An example of such restoration measures is dynamic river widening, referring to the removal of bank protection on one or both river banks. With each subsequent flood, the river can laterally erode its banks and reshape the riverbed and floodplain. Due to their reshaping force, floods play an important ecological role in creating new and diverse habitats.

Whether aquatic life can use these new habitats - especially as flood refugia – depends on numerous factors. For example, the floodplain needs to be inundated by the floodwater and connected to the river’s main channel. Bedload transport plays a crucial role therein, as shown by a study published in the Journal of Ecohydraulics at the beginning of 2021 by researchers from the Laboratory of Hydraulics, Hydrology and Glaciology (VAW) at ETH Zurich and Eawag. Bedload transport is a key driver of riverbed shaping and reshaping. However, this process is impaired in many Swiss watercourses because bedload is captured in sediment traps or reservoirs and is therefore scarce downstream; this is referred to as bedload deficit. If, in contrast, bedload availability roughly matches what the river can transport on average, this is called bedload equilibrium.

"We wanted to know how a bedload deficit will affect the availability of potential refugia for aquatic organisms such as fish and insect larvae in a restored river section," explain Cristina Rachelly, an engineer at VAW, and Christine Weber, a biologist at Eawag. The relation was investigated by combining laboratory experiments with numerical simulations. The laboratory experiments were based on the conditions in alpine and pre-alpine gravel-bed rivers. A one-sided widening of the Kander River near Frutigen (Bern) served as a reference reach.

This dynamic river widening at the Kander River served as a reference reach for the laboratory experiments investigating the influence of different bedload supply rates on the widening development. (Aerial photo: Federal Office of Topography swisstopo, photo: VAW, ETH Zurich)

Using the down-scaled river section in the laboratory, the researchers observed the development of dynamic river widenings depending on the bedload supply rate. Bedload supply corresponded to 20, 60, or 100% of the bedload transported by the channelized river at a given discharge, thus assuming a strong and medium sediment deficit or sediment equilibrium. The dynamically reshaping riverbed was surveyed at regular intervals, and the resulting topographies were used as fixed beds in the hydrodynamic numerical simulations. These simulations enabled hydraulic parameters such as water depth, flow velocity, and bed shear stress to be determined for the entire river section at a wide range of discharges.

More diversity and inundated area in case of bedload equilibrium

"The results show that in case of bedload equilibrium, the main channel widens, partially separates into multiple channels, and increases floodplain connectivity by elevating the riverbed. Erosion and deposition create a mosaic of diverse habitats and thereby also many areas where aquatic organisms can seek refuge during floods," the two researchers explain (see figure of simulated bed shear stresses). Furthermore, the floodplain is inundated and thus accessible to aquatic organisms at relatively low discharges, such as those with an average return period of 1 to 2 years.

In contrast, in case of a bedload deficit, the river’s main channel barely widens and remains disconnected from the floodplain, causing the water to flow at high velocity and depth. "A stable and incised single-thread channel means that the floodplain tends to be inundated only during major floods, such as those with return periods of 30 to 100 years," the researchers add. During smaller floods that occur more frequently, there are hardly any refuges available.

In case of a bedload deficit (BQ = 60 or 20%), the water mainly flows in the main channel of the river and causes high bed shear stress there (orange, red), while the floodplain remains almost dry. In the case of bedload equilibrium (BQ = 100%, repeated 2 times), a mosaic of both high bed shear stress areas and areas of reduced flow and lower bed shear stress forms. (figure: VAW, ETH Zurich).

In the case of bedload equilibrium (BQ = 100%, repeated 2 times), a large part of the riverbed and the floodplain are already inundated at relatively low discharges. Thus more than 90% of the area is inundated during floods occurring on average every 1.5 years (HQ 1.5). In case of a bedload deficit (BQ = 60 or 20%), larger floodplain areas are inundated only during floods with a return period of 30 years or longer. (Figure: VAW, ETH Zurich)

The central role of the bedload regime

This study is just one example of the complex interactions that have to be taken into account in restoration projects. "The development of dynamic river widening is, among others, strongly dependent on the bedload regime," Rachelly and Weber explain. On the one hand, a bedload deficit can lead to a river widening that does not develop as dynamically as intended. On the other hand, the study reveals possible synergies of different restoration efforts. Restoring the bedload regime can lead to river widenings developing more dynamically and thus potentially providing more refugia for aquatic organisms during floods. However, the researchers point out that floods are only one of several possible disturbance events to consider. Research is also needed on the effects of other types of disturbances. Of particular importance here are periods of heat and drought, the frequency of which is increasing due to global warming.