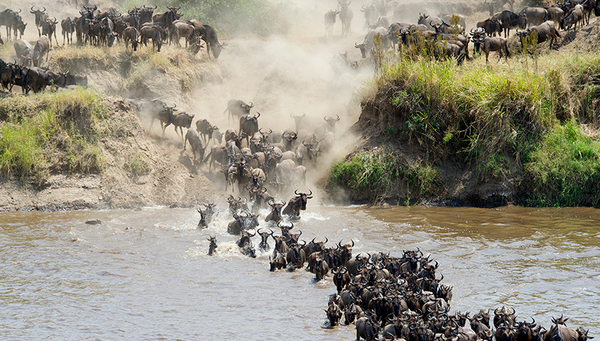 Scientists at Eawag and Zurich University have synthesised for the first time the amounts of carbon transported between many different ecosystems. According to this global synthesis, spatial flows of carbon can be very large – and their significance has previously been underestimated.

The scene may be familiar from natural history documentaries – a migrating herd of wildebeest attempt to cross a raging river, with many of the creatures drowning in the process – but what viewers do not generally notice is that large amounts of carbon are thereby transported from a grassland to an aquatic ecosystem. However, it did take the attention of Florian Altermatt and his team at Eawag and Zurich University: in a study supported by the Swiss National Science Foundation, these researchers conducted an extensive literature review aimed at quantifying the amounts of carbon moving between different ecosystems. First-author Isabelle Gounand (a postdoc in the Aquatic Ecology department) says: “Some spatial flows are larger than expected. In fact, for certain ecosystems, inputs of carbon from other ecosystems are similar to local fluxes.”

Carbon is transported between ecosystems in various ways. While inputs of leaf litter have long been recognized as an important source of carbon in aquatic ecosystems, other carbon flows have been less studied. For example, those occurring when seaweed is washed ashore, or when thousands of mayfly larvae emerge from the water and take to the air over neighbouring terrestrial ecosystems – and the overall importance of these spatial flows for ecosystems remained unclear. Altermatt’s group therefore reviewed scientific studies of cross-ecosystem carbon flows and, for comparison, also analysed data on local carbon fluxes within the recipient ecosystems: how much carbon is fixed by primary production, how much is respired, how much is released when biomass decays?

However, the hunt for relevant literature proved more difficult than expected. As the studies had frequently been published some time ago and came from a variety of fields, the terminology differed considerably; it thus only became clear in the course of the review which keywords should be searched for. Among the thousands of publications screened, the scientists found data that could be used to quantify carbon flows in about 600 studies.

According to Altermatt, “Some of the studies we looked at were highly specific and sometimes also hadn’t attracted much attention.” Now, however, by combining the data in a global synthesis, the scientists were able to generate important new findings: in lakes, rivers and benthic marine ecosystems, the amount of carbon entering from neighbouring ecosystems can be equivalent to that which is locally fixed, respired, or released during decomposition. In forests or grasslands, the situation is different: here, because of the very high primary production occurring in terrestrial ecosystems, local carbon fluxes are two to three orders of magnitude greater than inputs from other ecosystems.

Carbon is generally transported passively – by factors such as wind, gravity or tides. Active transport occurs when, for example, insects inhabit different ecosystems in the course of their life cycle, when wildebeest drown during migration, or when hippopotami graze in the savannah and defecate in rivers.

Dependencies on flows among ecosystems

Altermatt concludes: “When we study ecosystem processes or functioning, we need to pay more attention to carbon flows between connected ecosystems.” Strong spatial couplings mean that ecosystems are vulnerable to alterations in carbon flows. For example, if forest is converted to agricultural land, carbon inputs to surface waters are reduced, with changes to aquatic food webs and communities. Or, to return to the wildebeest: if their migration route is blocked by a new road, a source of carbon may thus be eliminated.

These complex natural transport processes concern spatial flows not only of carbon, but also of nutrients such as nitrogen or phosphorus – which in turn would merit further study.

Mayflies, like many other insects, develop as larvae in lakes and ponds. As adults, they also inhabit terrestrial ecosystems, where they represent a source of carbon.
(Photo: Florian Altermatt)

Leaf litter from surrounding thickets and woods is an important source of carbon for rivers.
(Photo: Florian Altermatt)