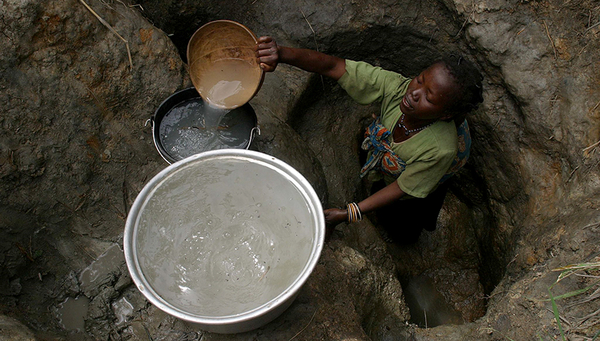 As an additive in toothpaste, it protects our teeth from decay. But when fluoride occurs in nature in larger quantities and accumulates in groundwater, it can become a hazard for our health. For the first time, Eawag scientists have produced a detailed map of global fluoride contamination in groundwater and shown which regions of the world are particularly affected.

Not every pollutant in man-made. Some occur naturally in rock and thus also in groundwater. For example fluoride, which has a toxic effect when ingested in large quantities and causes bones and joints to degenerate. Besides geology, climate is a decisive factor for fluoride accumulation in groundwater. Concentrations are particularly high in hot, dry regions: On the one hand, because higher temperatures favour weathering and thus the dissolution of fluoride from the rock, and on the other hand, because the fluoride remains in the groundwater for a longer period of time, as this is renewed only very slowly due to the low amounts of precipitation. The assumption is obvious that with climate change and the advancing desertification in many parts of the earth, the fluoride problem could also become more acute.

To make matters worse, fluoride often goes undetected because it is odourless and invisible. Only water analyses provide information about excessive concentrations. In many countries of the global south, however, groundwater is hardly tested, and quite a few people get their water directly from a groundwater pump. The risk areas are therefore not widely known, and there are many gaps,” says Joel Podgorski, who is doing research on water resources and drinking water at Eawag. “We wanted to fill these gaps with our work to create a basis for better groundwater monitoring.”

Joel Podgorski and his colleague Michael Berg have developed a model based on machine learning. Based on certain soil properties as well as topographical, geological and climatic factors, this model calculates the probability of the fluoride content being above the health-relevant threshold limits of 1.5 milligrams per litre. A prerequisite for the model to function is sufficient measurement data to train the computer algorithm. “Our first trial a few years ago failed because we had too little measurement data for a reliable model,” says Podgorski.. In the meantime, however, more and more countries are making their data publicly accessible. That is why the two researchers were able to create a database of 400,000 fluoride measurements in groundwater - the largest global dataset to date.

The map shows the nationwide probability of fluoride concentration in groundwater exceeding the threshold limits set by the World Health Organisation. Virtually all of Africa and large parts of Asia have potentially hazardous fluoride exposure. An interactive version of the map is available on the GIS-Platform gapmaps.org.

The result is a map that shows, with a high resolution of 250 metres, where there is a risk of fluoride limits being exceeded. “We see that the concentrations are likely to be too high in southern America, Central Asia, China and Mongolia, for example. In countries where groundwater has hardly been tested so far”, says Podgorski. The risk is low in Switzerland and Europe. “Our results thus provide new information for researchers and authorities on-site and give an important impetus to take a closer look at groundwater in the affected regions in the future and to take measures, such as campaigns to sensitise the population or defluoridate drinking water.” Podgorski was surprised that the model also predicts high fluoride concentrations for areas in north-eastern Brazil. “This doesn’t fit the usual pattern of dry areas having high fluoride levels in groundwater.” This is an interesting result, which encourages a more detailed investigation of the situation in this region in a future study - as Podgorski and other researchers have already done recently for Ghana and Pakistan.

Many people affected, many open questions

In addition to the risk areas, the two researchers also calculated how many people worldwide are at risk from fluoride exposure. To do this, they not only used population figures, but also took into account data on water consumption. Because whether fluoride is problematic ultimately depends on where people get their drinking water from, whether it comes treated from a tap or directly from a groundwater pump. The calculation showed that potentially around 180 million people worldwide are exposed to fluoride contaminated groundwater. And almost exclusively in Asia and Africa.

Excessive fluoride concentrations are not only hazardous where people draw untreated drinking water from wells and groundwater pumps. In Australia, for example, practically no-one is at risk, even though fluoride levels in groundwater are above the threshold limits in many places. In Africa and Asia, on the other hand, a total of 170 million people are affected. An interactive version of the map is available on the GIS-Platform gapmaps.org.

The extent to which fluoride form groundwater finds its way into agricultural products and thus into foodstuffs, as is the case with the heavy metal arsenic in rice, has so far been little researched. “I am always amazed at how many issues related to fluoride are still unresolved,” says Podgorski. “There is a lot of research that still needs to be done. Especially as climate change could exacerbate fluoride exposure in many regions. I think our map not only creates an important basis for preventive measures, but also for further research questions.”

Global analysis and prediction of fluoride in groundwater

The health of millions of people worldwide is negatively impacted by chronic exposure to elevated concentrations of geogenic fluoride in groundwater. Due to health effects including dental mottling and skeletal fluorosis, the World Health Organization maintains a maximum guideline of 1.5 mg/L in drinking water. As groundwater quality is not regularly tested in many areas, it is often unknown if the water in a given well or spring contains harmful levels of fluoride. Here we present a state-of-the-art global fluoride hazard map based on machine learning and over 400,000 fluoride measurements (10% of which >1.5 mg/L), which is then used to estimate the human population at risk. Hotspots indicated by the groundwater fluoride hazard map include parts of central Australia, western North America, eastern Brazil and many areas of Africa and Asia. Of the approximately 180 million people potentially affected worldwide, most reside in Asia (51–59% of total) and Africa (37-46% of total), with the latter representing 6.5% of the continent’s population. Africa also contains 14 of the top 20 affected countries in terms of population at risk. We also illuminate and discuss the key globally relevant hydrochemical and environmental factors related to fluoride accumulation.
See DOI
See Institutional Repository
Podgorski, J.; Berg, M. (2022) Global analysis and prediction of fluoride in groundwater, Nature Communications, 13(1), 4232 (9 pp.), doi:10.1038/s41467-022-31940-x, Institutional Repository

More work on the topic

Monitoring and prediction of high fluoride concentrations in groundwater in Pakistan

Most people in Ghana have no or only basic access to safely managed water. Especially in rural areas, much of the population relies on groundwater for drinking, which can be contaminated with fluoride and lead to dental fluorosis. Children under the age of two are particularly susceptible to the adverse effects of fluoride and can retain 80-90% of a fluoride dose, compared to 60% in adults. Despite numerous local studies, no spatially continuous picture exists of the fluoride contamination across Ghana, nor is there any estimate of what proportion of the population is potentially exposed to unsafe fluoride levels. Here, we spatially model the probability of fluoride concentrations exceeding 1.0 mg/L in groundwater across Ghana to identify risk areas and estimate the number of children and adults exposed to unsafe fluoride levels in drinking water. We use a set of geospatial predictor variables with random forest modeling and evaluate the model performance through spatial cross-validation. We found that approximately 15% of the area of Ghana, mainly in the northeast, has a high probability of fluoride contamination. The total at-risk population is about 920,000 persons, or 3% of the population, with an estimated 240,000 children (0-9 years) in at-risk areas. In some districts, such as Karaga, Gushiegu, Tamale and Mion, 4 out of 10 children are potentially exposed to fluoride poisoning. Geology and high evapotranspiration are the main drivers of fluoride enrichment in groundwater. Consequently, climate change might put even greater pressure on the area's water resources. Our hazard maps should raise awareness and understanding of geogenic fluoride contamination in Ghana and can advise decision making at local levels to avoid or mitigate fluoride-related risks.
See DOI
See Institutional Repository
Araya, D.; Podgorski, J.; Kumi, M.; Mainoo, P. A.; Berg, M. (2022) Fluoride contamination of groundwater resources in Ghana: country-wide hazard modeling and estimated population at risk, Water Research, 212, 118083 (10 pp.), doi:10.1016/j.watres.2022.118083, Institutional Repository

The work was supported by the Swiss Agency for Cooperation and Development (SDC).