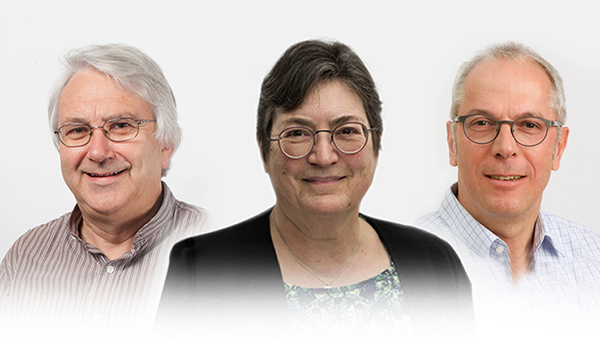 The Swiss Waste Water Association (VSA) appoints three Eawag researchers as honorary members in recognition of their consistent academic work in the field of water body conservation, and their dedication to building bridges between research and practice.

The honour was afforded to Prof. Janet Hering, Director of Eawag, Prof. Rik Eggen, Deputy Director of Eawag, and Prof. Alfred Johny Wüest, a member of the Eawag Directorate up until 2021. The VSA has been campaigning for clean and life-sustaining waters since the professional body was founded in 1944. To Heinz Habegger, President of the VSA, this recognition of the many years of academic research carried out by Janet Hering, Rik Eggen and Alfred Johny Wüest sends out an important and strong signal on behalf of Swiss water protection. “I am delighted, at this, our 78th general assembly, to welcome our three colleagues as honorary patrons in recognition of their work in the field. Eawag’s active engagement in water protection is very important to the VSA.”

Building bridges between research and practice

Together with her colleagues at Eawag, Janet Hering has understood perfectly the importance of building bridges between research and practice in Switzerland, and to establish knowledge transfer and peer-to-peer exchange of ideas between the renowned Swiss Federal Institute of Aquatic Science and Technology of the ETH Domain and practitioners in the field, the VSA writes. Nurturing a successful relationship with academia is also essential for the VSA and for water protection, and is extremely useful. This is apparent from the results that have been jointly achieved and the tangible progress made. There are particularly close collaborations for example when it comes to the knowledge platforms for “Micropollutant Process Engineering” and “Water Quality”. Rik Eggen also nurtures the collaborations with practitioners, the authorities and professional associations from a place of conviction: “Developing research in partnership with real-world practitioners is very important to me – that goes without saying, but it is also hugely enriching and inspiring. This recognition by the VSA, with which I have a long-standing, multifaceted connection, is a great honour for me.”

Janet Hering takes practice-oriented water protection very seriously – a fact which she also revealed in her personal reflections in the documentary “60 Jahre – rettet das Wasser”. In her narrative she talked about the progress made in the area of water protection in recent years, but also stressed the responsibility we all carry as water users. After all, substances do not simply disappear when we flush them down the drain. Talking about her honorary membership, Janet Hering says: “I am convinced that practice-oriented research allows the identification of new and challenging research questions that demand the highest quality of scientific investigation.”

Alfred Johny Wüest appears pleasantly surprised at the accolade, calling it a “great honour”. He says that he has always seen his work as just one part of the water protection work that goes on at both national and international level. He goes on to highlight the importance of successful collaborations between research, associations and real-world decision makers for the wider cause. He finds it very gratifying that the VSA works beyond national boundaries.

Honours accorded at the annual general assembly in Luzern

The VSA will confer the honours on Janet Hering, Rik Eggen and Alfred Johny Wüest at its 78th general assembly on 28th April 2022 in Luzern. The industry convention will take place before the general assembly, and will be on the topic of what the goals of “zero pollution” and “net zero” mean for Swiss water protection. National Council member Kathrin Bertschy from the Green Liberals party will be a guest speaker, in conversation with Heinz Habegger.

Janet Hering, Director, Eawag
Since 2007 Professor of Environmental Biogeochemistry at ETH Zurich and Director of Eawag. In her work as a chemist, Janet Hering specialises in purification of contaminated water for use as drinking water, and in the biochemical behaviour of trace metals. She holds a full professorship in Environmental Biogeographical Chemistry at ETH Zurich, and in Environmental Chemistry at EPFL. Janet Hering is a member of various national and international bodies, including the renowned US National Academy of Engineering, which accepted her as a member in 2015.

Rik Eggen, Deputy Director, Eawag
Rik Eggen has been working at Eawag since 1994, and has been Deputy Director since 2007. One of his areas of research as a biologist is to examine the effects aquatic chemical pollution on environmental and human health, as well as to understand the mechanisms of action of pollutants, and thus how these effects can be reduced. Rik Eggen is engaged as Adjunct Professor of Environmental Toxicology at ETH Zurich.

Alfred Johny Wüest, former Member of the Directorate, Eawag
Worked at Eawag from 1989 to 2021, and served as a Member of the Directorate between 2015 and 2021, retiring in 2021. An environmental physicist, Alfred Johny Wüest investigated and modelled mixing processes and biogeochemical fluxes in lakes and reservoirs. He also conducted research into the impact on aquatic environments of pumped-storage operations at hydroelectric power stations and the use of warm water from lakes. Alfred Wüest was full professor of Physics of Aquatic Systems at EPFL (holder of the Margaretha Kamprad Chair), where he was also Director of the Limnology Centre.