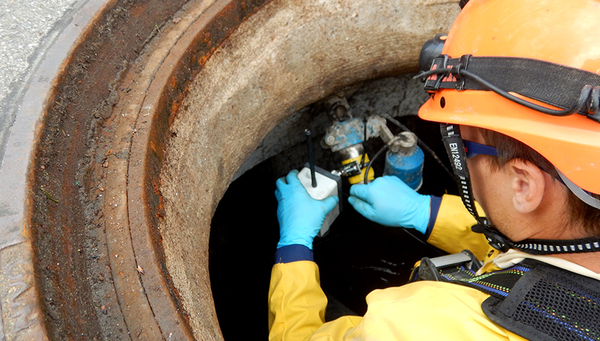 With the help of modern sensors and the innovative remote data transfer system LoRaWAN, researchers at Eawag are investigating the relationships between precipitation and the resulting drainage processes. It is hoped that the new technology, otherwise known as the “Internet of Things”, will enable wastewater disposal and sewage systems to be run as efficiently as possible, as well as allowing the quality of wastewater and waterbodies to be monitored.

By installing sensors in everyday objects, equipment and machinery, all kinds of processes can be improved. Thanks to LoRaWAN (Long Range Wide Area Network), machines and equipment can communicate with each other independently of the electricity grid or wired networks, and can transfer small amounts of data. Knowing how full waste disposal containers are at any given time can allow the authorities in towns and municipalities to optimise their collection routes and thus reduce costs and CO2 emissions. Switzerland is currently in the process of establishing a nationwide communication network between devices, sometimes also known as the “Internet of Things”. Researchers at Eawag have recognised the potential of this technology and are already using the LoRaWAN. In conjunction with ETH Zurich, they have been constructing a network of sensors in the municipality of Fehraltorf since May 2016, and are carrying out tests in an “urban water observatory” to see whether the innovation is suited for the purposes of aquatic research and for municipalities and cities.

In order to research the relationships between precipitation and drainage processes, the researchers have installed wireless sensors in the sewage system. The sensors, which have been developed by Eawag and the Empa spin-off “Decentlab”, measure precipitation, outflow and water levels and send the data in encoded form to the LoRaWAN gateways. The data bundled by the basis stations are then decoded by a central network server and made available to users in the form of a database. Thanks to the spatially and temporally high-resolution measurements, the researchers are able to monitor the system dynamics more or less in real time on computers or mobile devices.

LoRaWAN: Long Range Wide Area Network
LoRaWAN is a network protocol that is based on the open industry-standard LoRa, with its specifications set by the organisation LoRa Alliance.
It permits bi-directional communication between equipment such as sensors and gateways.
The data are transmitted via radio with a maximum transmission power of 25 milliwatts. This is around one fortieth of the maximum transmission power of a mobile phone.
The advantages are the low power consumption, low hardware costs and encoded data transmission.

The researchers are currently using the sensor network to look at the spatial and temporal dynamics of micropollutants in wastewater, and possible impacts of urban land use. Substances such as pesticides, medical drugs and cosmetics end up in our wastewater on a daily basis and pollute the environment. The researchers are aiming to arrive at a reliable way of measuring and interpreting the data on the inputs of these pollutants. Thanks to the sensor network, they are able to tell, for example, when the sewage system is overloaded and untreated sewage is escaping into the environment. They can then test the water quality in a targeted way.

Fig. 2: The wireless sensors transmit spatially and temporally high-resolution measurements of drainage and water levels to the researchers.

LoRaWAN transmits only small amounts of data. For example, the researchers installed a sensor at an overflow, which transmits the information “wet” or “dry”. Consequently, the devices use very little energy. The gateways use solar power, and the production and maintenance costs of the battery-powered sensors are low. Nevertheless, LoRaWAN has a range of over 20 kilometres. This summer, exceptionally favourable conditions meant that a networked gateway near Aarau received information about precipitation in Fehraltorf, 56 kilometres away. According to

Christian Ebi, who works with various Eawag departments as a technician, the new technology even allows remote mountain valleys to be connected to the LoRaWAN network at low cost. The primary concern of the researchers, however, is not the establishment of new infrastructure, but the optimal operation and maintenance of existing drainage networks. Their vision is a “glass city”: in order to minimise risks of flooding and water pollution, for example, it is vital to understand the hitherto invisible wastewater infrastructure and to shed light on what goes on underground. To this end, Eawag is working with Zurich University of Applied Sciences and the University of Applied Sciences Rapperswil to develop sensor technology and expand the network. It is also planned to install sensors directly in groundwater and waterbodies.

Close cooperation between research and practice

Thanks to the collaborative project between Eawag, ETH and the municipality of Fehraltorf, prospective environmental engineers are afforded insights into the development and operation of the field laboratory, and can answer real-world questions using the latest analytical methods. The extent to which the field of water protection can be further improved remains to be seen, but one thing is already certain: the project promotes an active exchange of ideas between science, tertiary education and partners working in the environmental sector.