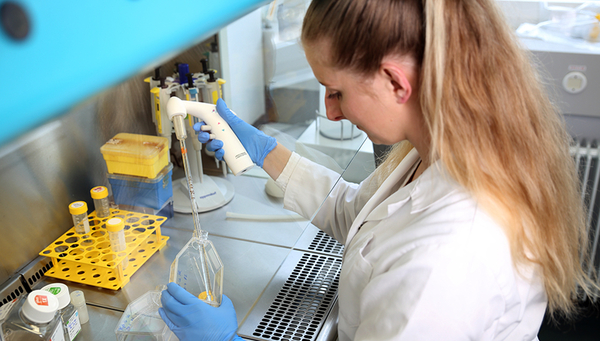 Eawag researchers have won a competition organised by Britain’s National Centre for the Replacement, Refinement and Reduction of Animals in Research (NC3R). The prize money is awarded for use in research to develop technologies to replace animal testing.

Eawag avoids animal testing wherever possible, and the Institute is also heavily involved in the development of methods that will eventually make animal experiments obsolete. A team of researchers led by the Environmental Toxicology Department Head, Prof. Kristin Schirmer, and the Eawag spin-off aQuaTox-Solutions, together with partners from the Slovenian National Institute of Biology, took part in the annual CRACK IT Challenge, run by the British NC3R. Working in collaboration with industrial players, the mission of NC3R is to translate scientific innovation into products and services that replace, reduce and improve the use of animals in safety assessment and research.

Tests based on fish cells

Schirmer’s team is one of three winners of this year’s Challenge, sponsored by industrial partners AstraZeneca, Bayer and Unilever. Over the next six months, the scientists will use their prize money of £100,000 to develop a concept that will replace fish testing with tests deploying cultivated fish-cell lines for the environmental risk assessment of chemicals.

Upon completion of phase 1, the team can then win a further £700,000 to develop and bring to market a reliable procedure for evaluating chemical toxicity. The procedure is intended to include a predictive computational tool and a battery of newly developed fish-cell-based assays.