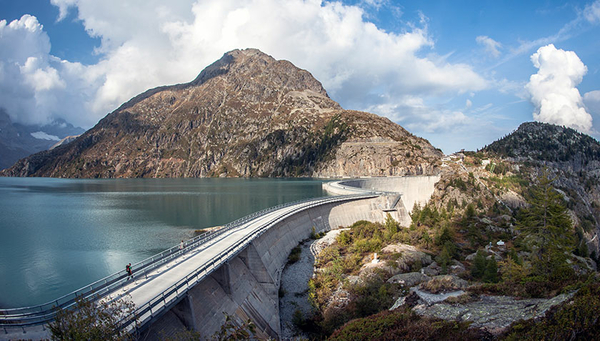 It is no secret that climate change has a serious impact on the quality and ecology of aquatic environments. Researchers at Eawag have revealed that human responses to climate change are just as impactful on our water systems – for example, in the areas of agriculture and hydropower.

When thermometers in California recorded scorching temperatures in the summer of 2000, even the salmon in Klamath River felt the effects. The temperature of the water drove them to gather in unusually large numbers in confined spaces, creating the perfect food source for pathogens. At the same time, farmers redirected increasing amounts of water to their arid fields, which reduced the streamflow. As a result, 70,000 fish died. It transpired later that this devastating salmon-kill could have been avoided if the farmers had not diverted so much water to irrigate their land.

In a recently published study, researchers at Eawag clearly demonstrated that climate change is not the only cause of such devastating effects on aquatic ecosystems. Based on extensive literature research and expert interviews, the researchers concluded that the way humans respond to climate change is just as crucial, as exemplified in the case in California: by intensifying the irrigation of crops or switching to more drought-resistant varieties.

We have long been aware of the direct impact of climate change on natural freshwater systems. For one, it disproportionately increases the temperature of freshwater environments in mountainous regions. But it also changes the flow rate and drainage times of watercourses – as a result of increasing summertime droughts and the continued melting of the glaciers. This does not just threaten the habitats of aquatic life and their biodiversity. Around 1.5 billion people who rely on the water resources from these mountainous regions will also suffer if the quality and quantity of the drinking water deteriorates.

On the other hand, the impacts of these indirect measures, i.e. the human response to climate change, are under-investigated by comparison. Within the context of the “Hydro-CH2018“ hydrological scenarios of the National Centre for Climate Services NCCS, researchers at Eawag, under the guidance of Christian Stamm (Group Leader at Eawag) and Florian Altermatt (Group Leader at Eawag and Associate Professor at the University of Zurich), compared the direct and indirect impacts on the quality and ecology of the bodies of water. They found that the indirect impacts of climate change may not only increase the direct impacts, but even surpass them in the short term.

One of the main drivers, in addition to agriculture, is hydropower. As Switzerland strives to become climate neutral by 2050, it is pushing ahead with the switch to renewable energy, which includes the expansion of hydropower. But good measures for counteracting greenhouse gases often have a detrimental impact on water systems. This is what Morgane Brosse, evolutionary biologist and first author in the Eawag research paper, has to say on the subject: “When less water flows downstream from the hydropower plants, the river warms up and there is the risk that its bed will dry out in places. Dams or hydropower plants by rivers often form barriers that obstruct the migration of aquatic organisms.” According to the researcher, this in turn creates favourable conditions for disease and reduces genetic diversity – both of which are already an unfortunate direct consequence of climate change.

Is it therefore better for us to stop taking measures to counteract climate change in the future or what conclusions were the authors able to draw from this study? Brosse: “There is no denying that we need to take urgent action to stop climate change and reduce its direct impact on all ecosystems. But we must carefully consider the consequences of our actions to avoid making matters worse.” For the agricultural sector this means, for example, evaluating novel crops not only in terms of their climate niche and cultivability, but also with respect to their water requirements and fertiliser or pesticide footprints on aquatic systems. In particular, according to Brosse, it is about offering incentives for agriculture to ensure that new practices do not have an even more detrimental impact on aquatic systems.

And what about hydropower? Brosse responds, “Promoting sustainable energy resources is of paramount importance. However, it is becoming increasingly apparent that hydropower, although renewable, is not sustainable in many cases. When every drop of water is used, it is primarily the biodiversity that suffers. However, if it were possible to optimise the use of reservoirs so that the stored water was not only used to produce electricity but also to overcome droughts, this would be a beneficial solution for both climate protection and biodiversity.”

“There is no denying that we need to take urgent action to stop climate change and reduce its direct impact on all ecosystems. But we must carefully consider the consequences of our actions to avoid making matters worse.”

Report on the reliability of water supplies
The Federal Council adopted a report in mid-May on the reliability of Switzerland’s water supply. It sets out the evolution of the supply and consumption of water up to 2050 in the face of climate change and sheds light on conflicts that may arise during water shortages. Furthermore, it puts forward measures to best deal with the demand for water in the future, for example by cultivating crops adapted to the respective climate and location in order to reconcile the irrigation requirements of agriculture with the water resources available. The report also stresses that ecologically intact bodies of water are better able to cope with climate change.
Read more (in German, French or Italian)