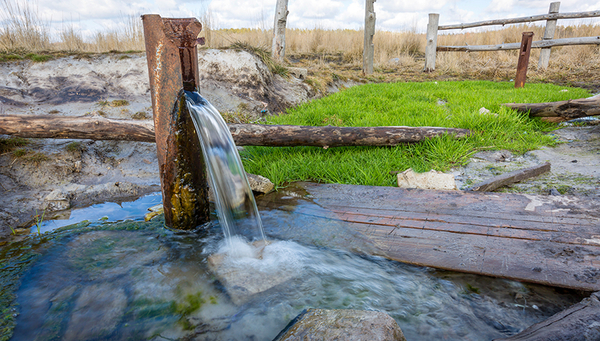 What is the state of groundwater in Switzerland? On World Water Day, we discussed this with hydrogeologist Christian Moeck, who, as an employee of the Eawag Hydrogeology Research Group, deals with the pressing challenges surrounding groundwater and researches how groundwater can be protected as a resource.

Mr Moeck, 22 March is World Water Day and this year the motto is “Our groundwater, the invisible treasure”. What does this mean for you as a hydrogeologist and groundwater researcher?

It is good that the United Nations is focusing on groundwater, as it is often forgotten in much of society and there are many misconceptions about its importance. Groundwater is the great “invisible” element of the water cycle and because it is not visible, it is often given far too little importance. However, groundwater is an important resource, because it provides the majority of our drinking water and is also very important for agriculture and industry. It is also a geothermal heat source and interacts with rivers and their associated aquatic ecosystems – to name just a few examples.

How important is groundwater in Switzerland?

Groundwater, including spring water, contributes 80 per cent of the drinking water supply in Switzerland and is therefore our most important drinking water resource. Obtaining sufficient groundwater of the best quality has been taken for granted for a long time. Today, it can still be said that overall, Switzerland has sufficient water at its disposal. Nevertheless, water shortages can occur during longer dry periods and especially in smaller catchment areas. The reason for this is too little precipitation (meteorological drought), which can lead to a deficit in groundwater regeneration, which in turn causes a lowering of the groundwater level and a deficit in groundwater runoff. However, groundwater droughts develop only slowly from meteorological droughts.

And how is the groundwater doing in this country?

As groundwater often has a long residence time in the subsoil, groundwater reserves can buffer longer periods of drought, and this is becoming increasingly important, especially due to climate change. Furthermore, temperature and other parameters, such as electrical conductivity or pH values, are subject to only minor fluctuations in groundwater over the course of the year. Long residence times also lead to self-cleaning and the removal of contaminants due to physical, chemical and biological processes in the subsoil. Both are important factors for drinking water production.

To what extent is groundwater in Switzerland at risk?

Precipitation patterns are expected to change with climate change. It is expected that mean precipitation in Switzerland will tend to decrease in summer and increase in winter. Since summer months in most parts of the country now have more precipitation than in the winter months, this also means a flattening in the annual cycle in precipitation and groundwater regeneration. Warmer temperatures lead to increased melting of snow in spring, which further alters the water balance. Also, changes in river runoff and water temperatures can have complex effects on groundwater quality and influence many biological, chemical and physical groundwater processes. In order to minimise possible negative impacts of climate change, the risks and future conflicts associated with groundwater use need to be identified and new adaptation and mitigation strategies need to be developed.

Groundwater quality can also be impaired in the long term by nitrates and pesticide residues from agricultural production. Groundwater is increasingly affected by micropollutants from industry, commerce and households. Current challenges to groundwater quality include the input of nitrate and long-lasting pesticide residues. Even after many years of bans, these residues are still being detected in groundwater. We have to rethink when we use nitrates and, for example, only apply as much as the plants require in crop rotation. Residual nitrates from previous plantings must be recorded and taken into account in the next planting.

Urban development is also often associated with urban sprawl, which means that in many cases, legally defined drinking water protection zones can no longer be guaranteed. Urban development can also affect groundwater quality, for example through contamination from leaking sewage systems or changes in groundwater temperatures from geothermal energy use. While it is clear that we are highly dependent on industrial production and that cities will grow, this also holds potential for groundwater contamination through accidental releases of a wide variety of substances.

And looking beyond Switzerland?

From a global perspective, groundwater is becoming increasingly at risk. Due to the steadily increasing world population, more and more food has to be produced. This is accompanied by an increase in irrigation, which is largely covered by groundwater. In many places in the world, more water is taken from the subsoil than is supplied by precipitation. This leads to falling groundwater levels and, in the longer term, the loss of this resource. In addition, salinisation of the soil can occur if irrigation is constant.

Eawag has recently launched a new platform for groundwater topics. CH-GNet – what is it about?

This is an exchange, information and networking platform for experts from the groundwater sector, research, authorities, enforcement and practice, and for citizens interested in the topic. The objective of the network is to record hydrogeological issues and challenges under the influence of new developments, to develop approaches to solutions and measures, and to help implement them. In addition, groundwater-related issues are to be made more visible. Particularly important here is also the network’s close collaboration with the groundwater protection platform created by the FOEN, which is based at the University of Neuchâtel, and with the new hydrogeology Chair at the University of Basel, which is co-financed by Eawag. With these two new “players”, CH-GNet will develop many impulses and synergies.

Throughout Switzerland, there is a great need for a continuous development of expertise, technical support and an exchange between research and a wide range of groundwater-relevant interest groups. Through CH-GNet, the aim is therefore not only to make groundwater-relevant topics visible and to work on them in a practice-oriented way, but also to initiate pilot studies and to take on a thought leadership role with the network.

World Water Day, which the United Nations (UN) has held since 1992, is an annual reminder of the special nature of water as the most essential resource of all life. The theme of World Water Day 2022 is: “Our groundwater, the invisible treasure”. With this year’s theme, the UN wants to draw attention to the importance of groundwater worldwide and make people aware of it.

Many people are not really conscious of the elementary importance of groundwater as an indispensable resource and part of the water cycle, as well as the pressures to which it has been exposed by human activities and increasingly by climate change. For this reason, and in view of imminent climate change, the United Nations is once again raising social and political awareness of the importance and value of our precious groundwater.