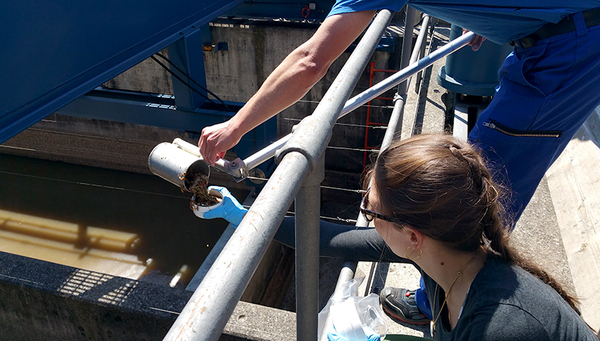 A study just published by Eawag scientists shows that gold and silver each amounting to around CHF 1.5 million a year are lost via effluents and sludge from wastewater treatment plants in Switzerland. The concentrations measured do not pose risks to the environment – and recycling would not be economically worthwhile. However, the study also produced surprising findings on other trace elements in wastewater, including rare earth metals such as gadolinium and the heavy metal niobium.

Trace elements are increasingly widely used in the high-tech and medical sectors – for example, the transition metal tantalum and the semimetal germanium in electronic components, niobium and titanium in alloys and coatings, or gadolinium as a contrast medium and in luminous paints. While the ultimate fate of the various elements has been little studied to date, a large proportion is known to enter wastewater. A group of researchers led by Eawag environmental chemists Bas Vriens and Michael Berg has now carried out the first systematic, quantitative assessment of elements discharged in effluents or disposed of in sewage sludge. The study, involving 64 wastewater treatment plants across Switzerland, was commissioned by the Federal Office for the Environment.

It is interesting to note the per capita fluxes calculated for the Swiss population on the basis of the element concentrations measured. These range from a few micrograms (e.g. gold, indium, lutetium), or more than a milligram (e.g. zinc, scandium, yttrium, niobium, gadolinium), to more than a gram per day (e.g. phosphorus, iron, sulphur). While this may not seem much at first glance, the nationwide fluxes expressed in kilograms per year are quite substantial – 3000 kg of silver, 43 kg of gold, 1070 kg of gadolinium, 1500 kg of neodymium and 150 kg of ytterbium (see Table S9 in the original publication).

Recovery worthwhile only in exceptional cases

The averages and annual tonnages say little about the distribution of element concentrations, which vary widely – by a factor of up to 100 – from one treatment plant to another. For example, elevated concentrations of ruthenium, rhodium and gold were found in the Jura (presumably from the watchmaking industry), and of arsenic (presumably geogenic) in parts of Graubünden and Valais. At certain sites in Ticino, concentrations of gold in sewage sludge are sufficiently high for recovery to be potentially worthwhile. This can be attributed to the presence of several gold refineries in the region. Overall, however, according to the researchers, the recovery of metals from wastewater or sludge is scarcely worthwhile at present, either financially or in terms of the amounts which could be extracted. For example, the total aluminium and copper fluxes are equivalent, respectively, to only 0.2 and just under 4 per cent of annual Swiss imports.

WWTPs: hotspots for some, but not all elements

The study focused primarily not on recovery value, but on fluxes and mass balances: this is the first time trace elements in wastewater have been systematically surveyed for an industrialized country. The researchers investigated the extent to which treatment plants contribute to total fluxes in receiving waters. While, in the case of gadolinium, effluent inputs account for 83 per cent of river fluxes, the proportion is just 24 per cent for zinc, 7 per cent for lithium and only 1 per cent for arsenic. For the major nutrient phosphorus, measurements from this study confirmed earlier calculations: inputs from wastewater treatment plants account for 50 per cent of phosphorus loads in large Swiss rivers.

Lastly, the researchers also assessed the environmental relevance of the element concentrations. Studies in Germany have reported critical local concentrations of the rare earth metals lanthanum and samarium in the Rhine. This does not appear to be an issue in Switzerland: in the vast majority of cases, concentrations were of no ecotoxicological concern and lay below specified limits. Elevated concentrations in effluents or sludge were only found at a few sites in the case of the heavy metals copper and zinc. At the same time, as the authors emphasize, little is known as yet about the potential toxicological effects of many emerging trace elements.

Median fluxes per capita per day for 62 elements, based on measurements at 64 wastewater treatment plants in Switzerland.
(Source: Eawag)