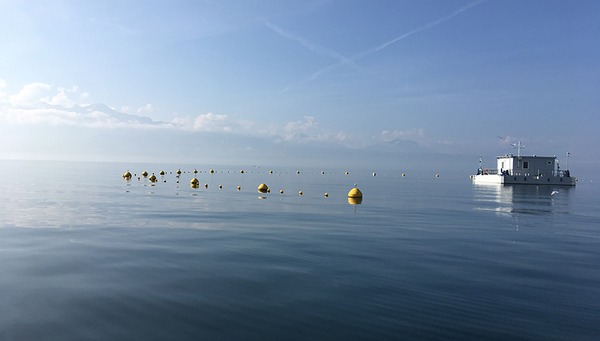 Changing temperatures and varying winds over the seasons cause great fluctuations in Lake Geneva. The LéXPLORE research platform monitored the movement of water within the lake for a year to learn more about how natural factors influence the lake’s mixing. The resulting analysis now paints a fuller picture of mixing in large lakes, which had previously only been studied over shorter time periods.

From April 2019 to April 2020, LéXPLORE scientists recorded a set of data that includes wind speed, current velocity, temperature and turbulence – all indicators that shed light on how mixing takes place in Lake Geneva’s water column over the course of a year. They have just published their findings in Communications Earth & Environment, a publication of the Springer Nature group.

Mixing plays an essential role in how large lakes supply oxygen and nutrients to their fauna and flora, yet technical limitations have thus far hindered scientists from understanding how this phenomenon is affected by changes in solar heating and wind energy across the seasons, which EPFL has already analysed recently.

The study is an important step in monitoring the health of a large lake like Lake Geneva, which plays a central role in the ecosystem and provides people living in the surrounding area with part of their drinking water. (Photo: Claudia Ofelio)

Comprehensive analysis for an entire year

The new study from LéXPLORE, however, takes that research to the next level through a year-long analysis that examines turbulent motions and mixing at the centimeter scale, at all levels of the water column down to the deepest depths. “This is the first time the lake’s behavior has been characterized across seasons,” says Bieito Fernández Castro, a former post-doc in the Physics of Aquatic Systems Laboratory (APHYS) at EPFL and the lead author of the study. “We achieved that by measuring and analyzing water movement at both a macro and micro scale over the course of an entire year.”

Mixing triples in strength during the winter

The scientists were able to take measurements in all levels of the lake, from top to bottom. Their data indicates that turbulent mixing in the water-column interior and at the deepest levels of the lake is three times stronger in winter compared to summer, a stark difference caused by more intense and prolonged winds during the cold months. This mixing primarily occurs in the lake’s deepest levels, known as the benthic layers. The researchers also observed that mixing in spring and autumn occurs at intermediate, comparable levels. During the summer, mixing is very weak in the lake’s deeper levels because of light winds as well as the sun’s heat, which prevents the density-stratified layers from mixing.

The research project covers an entire annual cycle and records the turbulence and circulation movements in the lake down to great depths with centimetre precision. (Photo: LéXPLORE)

This research represents a big step forward in assessing the health of large lakes such as Lake Geneva, which provides ecosystem services and some of the drinking water used by the surrounding population. The LéXPLORE research platform has been a pioneer in this type of continuous monitoring since it entered service in February 2019. The floating laboratory, covering 100 square meters, brings together scientists from EPFL, the University of Lausanne, the University of Geneva, the Swiss Federal Institute of Aquatic Science and Technology (Eawag), and the Alpine Research Center on Trophic Networks and Limnic Ecosystems (a collaboration between the Université Savoie Mont Blanc and INRAE, the French National Research Institute for Agriculture, Food and Environment in Thonon-les Bains, France). At their disposal are more than 100 sensors used to gather data on the lake.

“Our research demonstrates how important it is to continuously monitor large lakes so that we can identify the ongoing impact of climate change on lake behavior,” explains Fernández Castro. “It also shows that, because of the crucial role played by wind energy in turbulent mixing, it’s not enough to just measure the lake’s temperature over the year. To better understand the effects of climate change, you have to monitor the lake’s movements at the macro and micro scales, as we have done in this study.” According to Fernández Castro, this study proves that climate change will affect turbulent mixing in the lake over the long term. The exact extent of that impact, however, is anybody’s guess.

Cover picture: The LéXPLORE experimental platform is installed on Lake Geneva for a period of 10 years near Pully, where the water depth is 110 m. (Photo: Cary Troy)