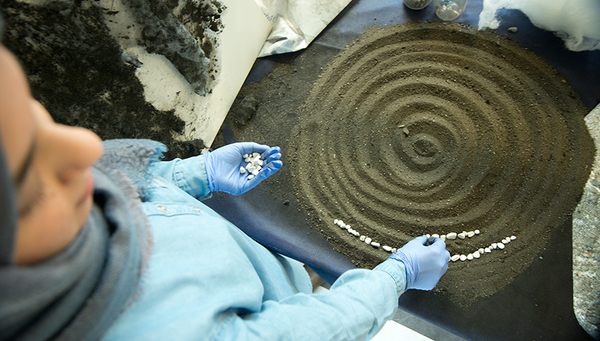 As part of the artists-in-labs programme run by the Zurich University of the Arts, two artists from Saudi Arabia are currently artists-in-residence at Eawag for three months. Zahrah Alghamdi is working in the Aquatic Ecology department and is looking at running waters and their physical properties as well as their emotional and poetical aspects, while Muhannad Shono is a guest of the Environmental Microbiology department, where he is exploring parallels between microorganisms and humans.

“Land Art” in the Roseg Valley

During her residency at Eawag, Saudi artist Zahrah Alghamdi has accompanied the Watercourse Ecology research group on three excursions to the Roseg Valley in the Engadine. Taking her inspiration from the activities of the scientists in the midst of this magnificent mountain terrain with its countless rivers and streams, she captured her impressions in the form of works created in the tradition of “Land Art”. She created the pieces either by hand or using simple tools, and made use of materials that she mostly picked up in the Roseg Valley — such as sand from a river bank, or dried plants. This process enabled Alghamdi to tune in to an unfamiliar landscape and leave her own imprint on it while at the same time offering up these imprints to the effects of impermanence. Having been documented in a series of photographs, the works represent a moment in time, as do the scientific data collected in the Roseg Valley.

Zahrah Alghamdi grew up in south-western Saudi Arabia, where she was surrounded by traditional architecture with artistically decorated rooms. These rooms reflect the unique cultural traditions and the history of her native land. In her work as an artist, she draws on her memories of these rooms and places, and their cultural significance. She forges links between history and the modern-day world by trying to create an echo of the past whilst throwing light on the changes in architecture that have moved it away from traditional techniques, materials and resources. She graduated in Design and Visual Arts at Coventry University in the UK, and is currently employed as assistant professor at the Faculty for Art and Design at the King Abdulaziz University in Jeddah, where she lives. During her stay at Eawag, Zahrah Alghamdi will be creating works that reflect laboratory work as well as the ecology of flowing waterbodies.

Muhannad Shono compares the organism which he discovered with LUCA (Last Universal Common Ancestor), the hypothetical last common ancestor and foundation stone of all organisms. His work led him to the roots of the tree of life, to the origins of civilisation. He elucidates their evolution, putting the newly-discovered organism into a creative context. The organism he claims is full of new ideas, «it’s a behavioural organism that originates from within our internal microbiome, a physical manifestation of a human behaviour or need», he said. «It appears to be an organism who's only purpose or reason for being is the propagation and spread of ideas, this idea rich institute seems to be the ideal environment for this organism to grow» Muhannad added.

When he was a young boy, Muhannad Shono was already writing comic books which wove together various storylines, fictional worlds and drawings. His love for storytelling is still apparent in his work today. His delicate mono ink drawings and animations depict figures moving across vast spaces or are absorbed by continually transforming landscapes and floods. As a naturalised Saudi with Syrian parents, his artwork grapples with themes of displacement, migration and identity. Shono likes to extend his use of ink on paper beyond the traditional forms by bringing sculptural, animated and acoustic elements into his works. He describes the process and method as “a fluid journey in which materials and methods are given the time and space they need to best tell and serve history’s story”. Muhannad Shono completed his studies in architecture at the King Fahd University of Petroleum and Minerals in Dharan, Saudi Arabia. He lives and works as an artist in Saudi Arabia and Australia.

Zahrah Alghamdi and Muhannad Shono will be presenting a public viewing of their work in the Atrium of Forum Chriesbach on 30th November 2017 at 6 P.M. to conclude their residency. The exhibition Unpublished - artistic observations will be on display until 7th December 2017.

Since 2003, the artists-in-labs program has been facilitating artistic research by way of long-term residencies for artists in scientific laboratories and research institutes. This programme is part of the Institute for Cultural Studies in the Arts (ICS) at the Zurich University of the Arts (ZHdK) and promotes sustainable collaboration between artists and scientists of all disciplines, not just in Switzerland but all around the world. These long-term interdisciplinary and cross-border collaborations provide artists with an opportunity to critically engage with the sciences and their experimental and aesthetic dimensions.